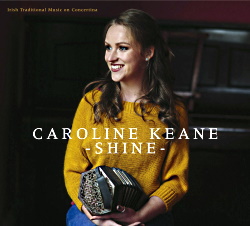 Caroline Keane is a concertina player, originally from Limerick, now living in Dingle.  Having gained a masters from Limerick University in Traditional Music Performance, she's been a member of the group Four Winds since 2013.  She's already released a CD of duets with fellow band member Tom Delany; and now, as she says herself, between her busy touring and teaching schedule, she's found time to curate, compile and present her own debut collection.

Caroline is obviously very technically able, the playing is of full of neat rolls, triplets, subtle variations within the tune structure as well as some more expansive melodic variations.  Caroline has picked a mix of old and new tunes, including compositions from such diverse musicians as John Brady, Vincent Broderick and Sean Ryan as well as two of her own compositions.  There's a good mix of tune types, including waltzes, a slow air and a barn dance as well as the usual fare of jigs, reels and slides.

As a member of a group, this CD sounds more like her showcase within that environment, all but two of the tracks are accompanied by up to three different guitars, piano, cello and bodhran.  The unaccompanied tracks are both duets with fiddle players.  Laura Kerr joins for a selection of Tommy Peoples' jigs and Jeremy Spencer plays three Kerry slides associated with Sliabh Luachra master fiddle player Denis Murphy.  For those listeners, like us, who prefer to hear the music speak for itself, these are the stand out tracks.  Sadly there are no completely solo tracks.

The accompaniment is very much in a modern style, what sounds mostly like DADGAD guitar, and on three tracks a bodhran who hangs behind the beat, and after a while it starts to grate.  The production and mixing by Donagh Hennessy is first class, the instruments are very well balanced and the assorted accompanists never overwhelm the lead instrument.

The CD shows that Caroline enjoys her music and playing with other people, and as such is a pleasing listen, without presenting any great examples of regional style or repertoire.  Available through the usual on-line shops and Caroline's own website https://carolinekeanemusic.com/