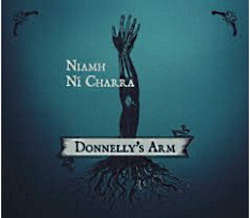 Niamh Ní Charra has made three 'solo' CDs before this one - Ón Dá Thaobh / From Both Sides in 2007, Súgach Sámh / Happy Out in 2010, and "Cuz" in 2013.  If you've read my reviews of any (or all) of them, you'll realize that I'm a fan - particularly of her concertina playing.  Exactly why it's taken eight years since the wonderful "Cuz" for her to come up with this one I don't know ... but maybe it's because she's needed the time to compose the ten of her own tunes found here - including the title track Donnelly's Arm.  I won't dwell on the interesting story of prize-fighter Dan Donnelly and his unusually long arms, which may have contributed to his victories over three English Champion boxers of two centuries ago. Buy the CD and read the booklet!  But what about the music and singing?

The gestation of the work began some years ago, but recording started just as the Covid Lockdown began, so we must assume that much of the CD has been constructed entirely in overdub mode.  If so, they've made a damn good job of it.  Compared with the previous three, this one has several sets of mixed time signature pieces - this makes for increased interest, but pleases me less than more 'coherent' sets.

We start with The Copper Mines of Killarney, one of Niamh's own composiions; a nice slowish jig, followed by another in similar vein, followed by a Nova Scotia one played, as is appropriate, much faster.  Next comes a nice barndance on concertina called here The Curlew Hills, but you may know it as the Glenbay Horpipe; it's followed by two polkas.  Track three is a song aboout cider; It think Niamh is better on free rhythm songs - and this one is very rhythmic.

Track five is slides; the first by Niamh, the others traditional.  One of the nice things about a Niamh Ní Charra record is that there's always at least one story involved - in this case Tom Billy's Favourite is a 2-part tune you'll recognise from one that Paddy Molony accidentally added a part of another tune to, and called the result Dingle Regatta.  Apparently it's considered sacrilegious to play that version in a session in Tom Billy Murphy's homeland of Sliabh Luachra!

As has been clear from her earlier CDs, Niamh is rather good at playing slow airs on the concertina, and she continues to do so with one of the (to these ears) most beautiful, Eanach Dhúin.  It's not quite the usual solo performance, as Kate Ellis joins her very effectively on 'cello.  Track seven stands out as an unusual inclusion - Gone, Gonna Rise Again / Ar Scáth a Chéile is an American song by Si Kahn, followed by two of Niamh's own compositions which reference it both musically and emotionally, "But the new wood springs from the roots underground."

Track eight is also unusual in that it's really played by guitarist Kevin Corbett, with Niamh backing up and adding the tune later.  She wrote it in memory of childhood summertime visits to Seanchnoc (Old Hill) in South Kerry.  Kevin also starts Waltz for Rosie, before moving into an old jig and a new slip jig.  Next is a free rhythm song about a piper's courtship, Ceol An Phíobaire, which Niamh sings very effectively, with the pipes played by Mikie Smyth.  Very nice!

Next we have a Basque tune followed by two well-known, old polkas, followed by a new, good one, written by Niamh.  And we finish up with the only set of reels on the CD, played on fiddle, concertina, both, and both plus Claire Sherry's banjo on the last - phew!  It goes without saying that all the playing is superb, and very well recorded.  There's so much to listen out for and, if I don't like it quite as much as I do the others, that's down to me, not Niamh Ní Charra.  Available via Bandcamp.