What Will Become of England?

When Rod Stradling asked me for an 'American' take on his latest MT release, Plenty of Thyme, I have to admit I was thrown for a loop.  I don't think of my opinions on things like this as particularly American (or white, or male, or Jewish, for that matter).  Still, he was right that the connections I make (not to mention the expressions I use) are likely to be quite different than those of a British reviewer.  So I suggested we wait until Rounder released its Alan Lomax series volume on Harry Cox, What Will Become of England? and then I'd be able to compare an English product to an American one - albeit both focusing on English singers.

This gimmick seemed a good idea at the time, but quite frankly, the results ended up being embarrassing to me as an American.  For although the Cyril Poacher volume is characterized by the best possible use of limited resources, the Harry Cox is the opposite: a missed opportunity in which glorious field tapes are not used to their full effect. 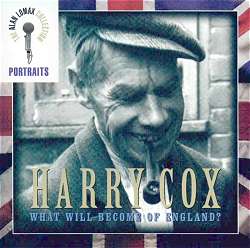 Let me elaborate, with regard first to the notes.  Harry Cox was one of the best-known traditional singers England ever had, while Poacher was relatively obscure.  Yet the booklet of notes on the Cox release has glaring errors - to state that Cox was 'discovered' in 1945, when there are songs of his in print in folklore journals by 1923, is inexcusable.  To claim that Percy Grainger was the only collector in the early part of the century to record cylinders is likewise a foolish mistake.  To state that Spotted Cow is 'the first English love song to be popularized by Steeleye Span, now considered the first English Folk-Rock group' shows that they're equally clueless about all eras of the folk revival: what about The Blacksmith, or Lovely on the Water?  What about Fairport Convention?  Worse than this, the biography of Cox begins when he's sixty years old!  (Granted, this is supplemented by oral data given on the CD)  Meanwhile, Rod Stradling went to written sources, surviving family members, and friends of Poacher's to create a long, detailed artistic biography of the singer, and confines his remarks to the factual.  While both booklets contain useful information, Stradling's pays more respect to the singer.

More important is the way the two editors treat the songs.  Stradling respects the integrity of each song, looking for the best extant version and including each song in its entirety.  Instead, the Harry Cox volume edits some songs (such as the aforementioned Spotted Cow) into snippets, a practice that is obnoxious from the point of view of the singer, the casual listener, and the folklore scholar as well!  It seems obvious to me that an album with one or two fewer songs, but all the songs complete, is a better idea than an album containing more songs whittled down to excerpts.  It never occurred to me that this practice of snippeting, which characterized the Kennedy/Lomax Folksongs of Britain series in the 1950s, would ever be used today; yet here it is, returning like a bad dream.  The only thing that saves any American face is the fact that the Cox disc, while issued by an American company as part of the 'Alan Lomax Collection', was really edited by Peter Kennedy, who must be held ultimately responsible for the stumbles and mistakes I've been harping on.  Take that, you Brits!

Lest you take my criticism of the Cox recording as a non-endorsement, let me clarify: both the Cox and the Poacher discs are essential listening for serious fans of traditional song.  The What Will Become of England? contains some absolutely brilliant performances, including The Barley Straw, Blackberry Fold and The Farmer's Servant; the last is a great wish-fulfillment song in which a servant waits for his master to depart, has his way with the master's wife, and gets credit for 'taking care of master's business'.  This basic plot, a brilliant piece of saucy protest laced with sex and satire, was known to American slaves in the nineteenth Century as well as to English farmworkers, but it never sounded better than this.  A lusty version of The Foggy Dew, a suitably serious Nelson's Monument and a detailed version of Henry the Poacher, in which the protagonist is transported to Australia for his crimes, all rehearse some of the basic concerns of English village life: love and marriage, wars and their aftermath, and trying to make a living in hard times.  Maybe the most fascinating of all the songs is Barton Broad Babbing Ballad, a purely local song about eel-fishing.  In the notes, the editors consistently misunderstand Cox's pronunciation of 'threading' as 'treating'; luckily Lomax made the same mistake in person and on tape; Cox's subsequent explanation makes it clear what he means.  Tunes played on both the melodeon and the fiddle show that Cox was an all-around rural entertainer, though they won't put him in the traditional players' hall of fame.

In general, one of the best features of What Will Become of England? is the incorporation of spoken bits in between the songs, giving Cox's own opinions of everything from working in a gang to songs on the radio (which he refers to as "all this-here squit")  That raises the CD well above the mundane level, and helps make up for the songs that are edited for length.  In addition, the very clean nature of these recordings makes for easier listening than most albums of field tapes.  The result is a (mostly) successful portrait of the legendary Harry Cox.

How does the MT release stack up, then?  Well, artistically it's superb - indeed, superior, since all the songs are intact.  Poacher has a wine-dark voice somewhere between baritone and bass, and he applies it mostly to serious old songs. 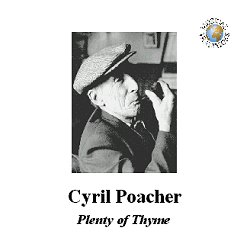 His style is almost invariably described as 'declamatory', and I can't argue with that; he was a straight-ahead, no-nonsense singer.  He doesn't seem to consider singing to be mere entertainment; on many of the old ballads he has something of the air of the grave schoolmaster giving you what's good for you!  Listen to General Wolfe, The Bonny Bunch of Roses or Flash Company and you'll see what I mean.  Other traditional songs sound less gravely serious, like that East Anglian classic The Nutting Girl, the unusual ballad The Maid and the Magpie and Australia - a song his friend Bob Hart also sang.

Unlike the traditional songs, some of the music-hall songs Poacher sings are clearly just for laughs; I particularly like the line "She's admired by the country farmers / When they see her in pajamas" which not only insults the bovine mother-in-law character of Running Up and Down Our Stairs, but does so with a clever couplet that only rhymes in Poacher's wonderful East Anglian accent.  Other material in the Victorian music-hall vein includes sentimental ditties like I'll be your Sweetheart and Two Little Girls in Blue, along with humorous pieces like Strolling Round the Town and Slap Dab, a song about a self-described "very handy man" who still "put more whitewash on the Old Woman than I did upon the garden wall."

On almost all the songs, Poacher's singing is splendid - smooth, measured, and slightly craggy.  Since these are homemade field recordings, the quality does vary, and it's here that the Harry Cox release wins out.  Still, all of these tracks are listenable, and true aficionados will be used to noisy pubs.  The result: Plenty of Thyme is just as good an audio portrait of a traditional English singer as What Will Become of England?, if not better.  In either case, it's one of the best ever composed.