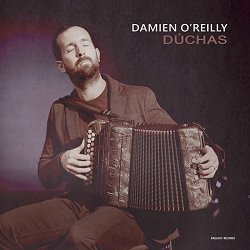 1. Farrell O'Gara and The Flogging;  2. The Maiden that Jigs it in Style and Triall Mhic Shiacais ar Luimneach;  3. The Cameronian Highlander / Grandmother She / The Old Timer;  4. Austin Tierney's / Toss the Feathers / The Real Blackthorn Stick;  5. Mary Brennan's Favourite / Uncle Jerry's / Come Back to Connemara;  6. An Ciarraíoch Mallaithe;  7. Iniscealtra / The Kilcloon / Out on the Road;  8. Lord Mayo / Napoleon Crossing the Rhine;  9. Kerryman's Fling / I have no Money / Donald Blue;  10. Maidhc Dainnín Ó Sé's Slide / Sweet Marie/ Tá an Coilleach ag Fógairt an Lae;  11. An Súisín Bán and The Galtee Hunt;  12. The Fog in the Bog and Páidín Ó Raifeartaigh;  13. Jim Donoghues and The Boys of Ballisodare.

Here is another CD from Jack Talty's studio and record label, this one features Corofin accordion player Damien O'Reilly playing an interesting variety of tune types on a couple of different boxes and a melodeon, accompanied by piano, guitar and bouzouki.

The opening track presents a modern BC box player following the style pioneered by Joe Burke and Finbarr Dwyer using a lot of triplets and subtle melodic variation, but with left hand chord work owing more to modern pipers' regulator style than the off-beat taps of older BC box players.  There's a lot of confidence in his playing and it is wonderfully set off by the superb accompaniment from John Blake on guitar and Damien's brother Padraic on piano.  Accompanists don't come any better than these two and they always add to the music.

Much of the CD continues in similar style through jigs, barn dances, marches and flings, as well as the reels that are a staple of County Clare music.

Of particular interest are the three tracks featuring Damien on melodeon.  There's been a resurgence of interest over the last few years in melodeon playing in the style of the old 78s, and the tone and finger work on these tracks is very reminiscent of the sound of Peter Conlon or the Flanagan Brothers.  Conlon champion Charlie Harris is credited as the source of one of the barndances.  These tracks are worth repeated listening for the exuberance in the playing.

One track is played on an old Paolo Soprani pitched in Bb for another pleasant change in tone.  These tunes are light hearted flings which fit well on the low pitched box.  There's even a slow air.  There was a time when airs on the box were hardly heard, but Tony MacMahon developed a way of playing airs under encouragement from Seamus Ennis that is now widely accepted and it's almost expected that a box player will have a number of airs.

The production is very good; the various instruments are all clear in the mix and the accompaniment never intrudes too much on the lead instrument.  The sleeve notes are an informative mix of sources and context.

As an example of the next generation of box playing, this CD has a lot to offer.  The sometimes florid style may not be to the taste of somebody looking for the next Joe Cooley or Kevin Keegan but the playing is technically very accomplished, there's wide variety in tunes types and melodic variation to keep the listener's attention for the full 40 minutes.  It's available as a CD or download through Bandcamp, where you can listen through the full recording before buying, or the CD can be obtained from Custy's shop.