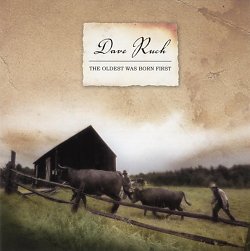 Well, this is very nice!  For those of you who, like me, have never heard of Dave Ruch (pronounced Ruck), I'll just say "Think of Jeff Warner, or even more, of Jeff Davis".  And that's high praise!

Dave hails from New York State which, despite its well-known cities, is mainly rural - and vast.  Inland from NY City, it spreads out into a huge triangle: north as far as the Canadian border (Montreal is only about 50 miles away); and west almost to Ohio; to the northwest its shores are washed by Lakes Ontario and Erie.  For montains, it has the Adirondacks and the Catskills - ie. the top end of the Appalachians.  Once you've realised this, the CD's subtitle doesn't seem as unreasonable as I first thought ... "What are French Canadian tunes and Nigger Minstrel songs doing here?"

Just to give you a taste of Mr Ruch, here's a bit of track 4, Wisconsin.  As well as being a very good singer, he plays a wide selection of instruments, some of which are over-dubbed here and there, particularly on the instrumental tracks.  He's also joined by quite a number of musical friends, both vocally and instrumentally, but rarely more than one or two at a time, keeping to a well-textured but light sound throughout.  This is a very nice record.

It's interesting that such an accomplished performer should keep to such a relatively local and low-key repertoire - this would never be the case in the UK, I think.

Maybe the US is big enough to accomodate such an approach ... in any event, I'm glad of it.  Don't think, by the way, that the 'low-key repertoire' I mentioned is at all bland - there's lots of variety here: a lumber camp ballad; canal songs; vaudeville; a child ballad (Our Goodman) and some cracking tunes.  There's also a surprising amount of humour - try The Bald Headed End of the Broom.

Don't be put off by the 'Own label, no number' tag either - remember that Jeffs Davis and Warner also have to produce their CDs this way - despite its huge population, I guess the USA doesn't find this strain of unpretentious traditional music a commercial proposition.  Maybe we can hope that, like the two Jeffs, Dave Ruch may wish to try his hand this side of the pond before too long.  I know I'd be in the audience!

I should also add that the booklet notes are an absolute model of historical and personal information on the sources of these songs and tunes - possibly the best of its kind that I have seen.  Well done!

To finish this review exactly as Dave does this CD, here's a little of a solo mandolin version of The Year of Jubilo.  Wasn't that nice?  You can get this most enjoyable CD directly from Dave Ruch at: www.daveruch.com   Why Not?