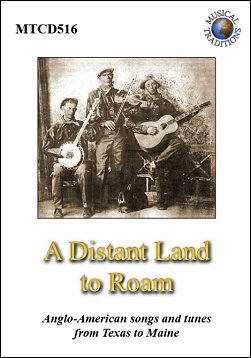 It's astonishing to realize that Musical Traditions have now provided us with over 4,000 tracks of traditional song and music, much of which would not have seen the light of day without their efforts.  Long may they continue.  This latest offering combines their interest in British and American material, evident in their back catalogue, and is a project that Mike Yates has wanted to do for many years.

It comprises twenty-one songs and four instrumentals of material of British origin that survived long enough in the USA to be recorded by the 'hillbilly' or 'old timey' bands of the 1920s and 1930s.  The songs include The Two Sisters', 'The Export Girl', 'Two Babes in the Woods', 'Ball of Yarn', and Darby's Ram'.  As Mike points out, this kind of older traditional song did not constitute a majority of the hillbilly repertoire, but it was a significant part of it, especially in the careers of early radio stars like Bradlcy Kincaid, who relied more on their own voice and guitar than on a multi-instrument band line-up.

The selection is excellent, giving a good sampling of different styles within the overall scene.  It includes well-known names such as Bascom Lamar Lunsford, Rilcy Puckctt, Ernest Stoncman, the Stanley Brothers, and Gid Tanner and his Skillet Lickers, but also a number of others who will be less familiar - Lonesome Luke and his Farm Boys, and Fred Jenkin's Pilot Mountaineers, for example.  The notes, as always, are informative and manage to cover both the performers and the individual tracks in enough detail to satisfy the majority of enthusiasts.

The banjos and fiddles on the CD may not appeal to everyone who likes British traditional music, but for those of us of a certain generation whose route to folk included the outstanding Folkways four-LP set of the Anthology of American Folk Music, it is heaven,