First the statistics.  The CD carries thirty-four items, thirty of them featuring the pipes (all immediately recognisable as Séamus Ennis by the bee-hive drone of his antique flat set made by Coyne of Dublin, around 1800, the Stradivarius of the Irish pipe-makers).

There are twenty superb examples of one of the greatest pipers of all time in full flow.  There are one or two minor hiccups in a couple of tunes, but, hell, could Séamus Ennis actually play a wrong note, as such? 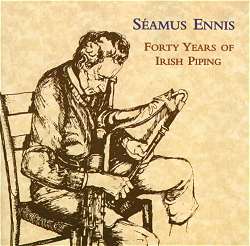 We have largely flawless demonstrations of the full range of ornamentations and variations that a master piper can apply to a melody - the pops, curls, cuts, trills and crans applied with variations throughout the repeats of the main theme.

Listen also to his sparing use of the regulators; occasionally percussive, occasionally placing long sonorous chords against the melody.  The latter was again uniquely Séamus.  The dimensions of the flat set are generally longer than the concert set.  As a result the regulator keys do not sit as conveniently to the right wrist, at one end of which is the arm that is pumping the bellows and at the other end of which are the fingers covering the lower part of the chanter.  Most players have to let go of the chanter to get the deeper chord on the flat set regulators, typically as a final flourish to end a tune.  Séamus was a greyhound of a man, long in bone, wrists and fingers.  He could hit that regulator chord and keep pumping and keep the fingers rattling out the cuts and crans for as long as he liked.  And he knew just when to do it to get the maximum effect.

High points for me?  Any of the above twenty.  The jig set headed by Piper of the Embers is definitive.  The reel set headed by Silver Spear is peerless.  His classic version of The Salamanca includes a run up to the high C in the second part which defies the normal physical constraints of the instrument.  And for a welcome return of an old friend, his delivery of Don Niperi Septo, executed with the usual aplomb - a silly story dating back three hundred years or more, which apparently made O'Carolan split his sides laughing, much like we did at his bravura performances back in the late sixties at the early conventions of Na Piobairi Uilleann.

However, while there are no criticisms of the piper himself, I think he is ill-served by the quality of some of the tracks chosen by the compiler.  On two of the sets the recording mysteriously cuts in the middle of the tune.  On another six sets the recording quality is poor and on another two the recording has been speeded up, raising the drones to D.  It's the speed of the tune that betrays this, for Séamus Ennis scorned fast playing as a disguise for imperfect technique.

Altogether ten items are for me spoilt by bad recording.  I would have thought that the CD issue would have been an opportunity to clean these up if not actually re-master.  As it is, you have to keep adjusting the controls to try to compensate for the differences in the recording quality.

The selection also contains some duplications.  Paddy O'Rafferty, Bucks of Oranmore, Silver Spear, Merry Blacksmith, Sixpenny Money all appear twice - in consecutive tracks in the case of The Bucks and consecutive sets in the case of Sixpenny Money.  This is not necessarily bad, as it gives you the opportunity to recognise the differences of improvisation within the overall consistency of the melody, but it might grate with buyers who want maximum bangs for their buck.

Given that the CD title is 'Séamus Ennis - Forty Years of Irish Piping' (the implication being 1937 to 1977, when the record was first issued), I would have liked to see some details of when and where the items were recorded, in order to put them into some sort of context.  Another irritation is the tunes in one set being named in the wrong order in the CD Notes.  That is sloppy; an insult to artiste and buyer alike.

On balance then, this is the CD for you if you want to make your Séamus Ennis collection as comprehensive as possible and are prepared to overlook the inclusion of some inferior recordings, which I suspect Séamus Ennis himself would have preferred to leave out, had he been asked, from this collection which appears to have been thrown together without much thought for the piper or his admirers.