The Fiddle Music of Donegal: Volume 3

I have always been a little uneasy about defining regional styles of Irish music.  Sometimes, I find so much variation amongst players that any such distinction becomes meaningless.  To me the one exception is the fiddle music of Donegal where, in spite of the obvious differences between, say Neil Boyle and Tommy Peoples, there is a common strand which sets the playing apart from that found in other parts of Ireland.  It is a style of playing that I find most attractive.  20 years ago, the Donegal style was in decline but it has enjoyed a recent resurgence which some have attributed to the international success of Altan who have always featured at least 2, and sometimes 3 fiddle players.

I'm not sure when I first heard Donegal fiddle music.  I guess that it was probably in those heady days of my youth when London boasted so many pubs with Irish music.  I think it was with the release of the Caedmon/Topic Folk Songs of Britain Series which included contributions from Michael and John Doherty that I first realised that Donegal playing differed from what I had until then regarded simply as an Irish fiddle style.

So what is it that gives Donegal fiddling its unique quality?  It is an essentially straightforward style featuring single bowing with an aggressive (I can think of no better word) attack and the frequent use of staccato ornamentation.  It perhaps has more in common with Scottish and Cape Breton playing than with other Irish regional styles.  There may well be historic reasons for this Donegal is after all a part of Ulster and there is ample evidence that local men frequently found seasonal work on the land in the Eastern parts of Ulster or the Scottish Lowlands until well into the twentieth century.  Michael Robinson suggests in the Autumn 1995 edition of The Fiddler Magazine that the style of playing may derive from the local piping tradition.  In Donegal this was based upon the Great Pipes, which were similar to the Scottish Highland pipes rather than the Uilleann pipes that were the norm in the rest of Ireland.

What is certainly so special is the large number of great players, including the Doherty brothers, various members of the Byrne family, Con Cassidy and Danny O'Donnell, to name just a few, that the area has spawned and who have been extensively recorded. 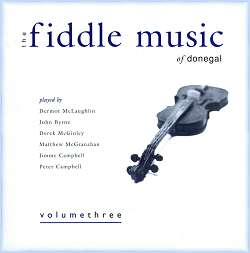 Their repertoire is more varied than is common in other parts of Ireland including waltzes, strathspeys, mazurkas and barndances as well as the usual reels, jigs and hornpipes.

This is the third CD, from a projected series of 5, one CD being issued every 2 years, to be followed by a further CD of archive material, showing a younger generation of players.  It has been issued by Cairdeas na bhFidleiri, an organisation founded by Caoimhin Mac Aoidh, who run summer schools devoted to teaching and to keeping alive the Donegal fiddle style and features 6 players, The youngest of these was just 15 when recorded.  All the players have association with the summer schools as students, teachers or organisers.  They were recorded in concert at the summer school in front of a small and appreciative audience of their peers.  The CD is essentially of solo fiddling with just one track of duet playing.  The playing of duets was common in the Donegal tradition so that aspect of the tradition may be underrepresented here.

All the players, though firmly rooted in the Donegal style, have absorbed outside influences to a lesser or greater degree.  Dermot McLaughlin is probably the best known player here.  He appeared on the Claddagh album The Road to Glenlough and produced that classic of Donegal fiddling, The Brass Fiddle.  His playing is perhaps the most "traditional" sounding of the musicians on display.  In common with older musicians he plays the tunes singly.  He really drives the music along in a style that rather reminded me of Michael Doherty who was always my favourite amongst players from an older generation.  His playing of the unusual 3 part reel, Miss Patterson's Slippers is simply stunning.

I feel I have to make special mention of the two youngest players, Derek McGinley and Matthew McGranaghan, who were just 15 and 17 respectively at the times they were recorded..  They display a precocious talent and both have the confidence to include slow airs and waltzes in their repertoire.  Matthew's playing does clearly show the influence of Shetland fiddlers and he includes two of Willie Hunter's tunes.  Derek's playing of the beautiful John Gallagher's Waltz is for me one of the highlights.  It is not a tune that I had heard until a recent holiday in Clifden.  A melodeon player who I knew only as John played it each time that he was invited out of the audience in Lowry's Bar.  I was immediately attracted to the tune.  Derek demonstrates maturity in his playing of this piece which belies his youth.  With young players like this, it is clear the future of Donegal fiddle playing is in good hands.

The three remaining players are from those famous fiddling families, the Byrne's and the Campbell's.  It is good to see the tradition still being handed down through the generations.  I especially enjoyed the 2 Untitled Mazurkas played as a duet by the Campbell brothers, Peter and Jimmy, who are nephews of Vincent Campbell.  I should have liked to hear one or two more tracks of duet or trio fiddling, if only to add a little more variety.

One unusual aspect is the playing of a tin fiddle on two of the tracks, The Wedding Jig and The Flogging Reel played by Dermot McLaughlin.  This does give a slightly dull and thin tone to the playing and the instrument is tuned a semitone flat which rather exaggerates that.  As far as I can ascertain, the metal fiddle was unique to Donegal having been made by travelling tinsmiths, including Michael Doherty, all through this century.  It's relative cheapness meant that the fiddle could be afforded by many more people and perhaps explains the predominance of the fiddle in Donegal music.

The playing is never less than good and frequently of the highest order.  The recording quality is uniformly first class throughout.  The repertoire is, as might be expected, well varied and includes 11 reels, 4 slow airs, 3 barndances, 2 each of jigs, mazurkas and hornpipes, a strathspey and a waltz.  This and the differing approaches adopted by each of the players give the whole CD a nice balanced feel.  Perhaps unsurprisingly, a significant proportion (11 out of 26) of the tunes have a Scottish origin.

The booklet includes a brief biography of each of the featured players and notes on the tunes as well as a potted history of the metal fiddle and a fine evocative piece about Mickey "The Miner" Byrne who made the tin fiddle used on the recordings.  The booklet and CD inlay feature a lovely old photograph of Mickey Mor Doherty, father of John, Michael and Simon.  All in all, a very nice production and highly recommended.  Can I add just a brief note of caution.  In case I have not already made it clear, do not expect to hear imitations of your favourite older player; this is a living and evolving tradition.  I am pleased to be able to report, on the evidence presented here, that it is in a very good state of health

The CD is distributed by Claddagh and is also available from Veteran.  All profits from its sale, including the artist's royalty are being put back to ensure that the summer schools and weekend seminars held around Donegal continue.

I have not heard the preceding volumes but repeated listening to this CD has convinced me that they will be worth further investigation.