The Frog Blues and Jazz Annual. No. 1

The Musicians, the Records & the Music of the 78 eraBook and 26 track CD 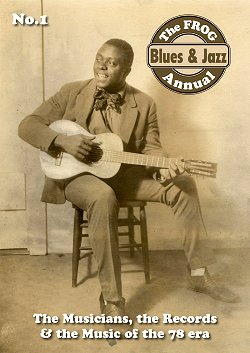 I first heard blues recordings some fifty years ago, when I was at school.  I can remember a series of 45 rpm EPs, Walter 'Buddy Boy' Hawkins was one of the singers, and a number of 10' LPs featuring such performers as Blind Blake and Blind Lemon Jefferson.  I used to go to France on exchange holidays during the summer holidays and returned with albums by Tommy McLennon, John Lee Hooker and 'Champion' Jack Dupree.  And then I was introduced to an amazing set of albums of early Mississippi and Alabama bluesmen (and the occasional woman) issued in the States on the Origin Jazz Library label.  Just who were these singers, with names such as Charlie Patton, Mississippi John Hurt, Bukka White, Skip James and Son House?  Well, I didn't have long to wait to find out more because a handful of youthful enthusiasts were not only researching these singers, they were actually touring the South and rediscovering them!  True, they didn't find Robert Johnson (the greatest of all mysteries) but, at least, we now know the background details to his short life and early, violent death.

And so, over the years we have come to know all that there is about the early blues.  Or have we?  To be honest, the new Frog Blues and Jazz Annual was a bit of a bombshell when it dropped through my letterbox.  I knew that Frog Records had produced a number of outstanding blues and early jazz CDs, but I had not expected them to produce a book that is packed full of research on singers and musicians who have always been on the sideline.  And, if that isn't enough, the book comes with a 26 track CD.

So, what do we get for our money (and at around Ł30 it isn't cheap).  Well, there are certainly some good articles.  Alex Van der Tuuk's 'The Graves Brothers' tells us just about everything that could be said about bluesmen Roosevelt and Uaroy (or whatever his name was) Graves and their two CD tracks Woke up this Morning (With My Mind on Jesus) and Hittin' the Bottle Stomp are gems.  Sadly, and this applies to most of the CD tracks, they are available elsewhere.  Terry Heath's 'Henry Thomas - Ragtime Texas, sad to say, has little to add to what we already know through the work of Mack McCormick and others, while the short, and unattributed, piece 'Death of Blind Lemon' is little more than an excuse for showing us a copy of Lemon Jefferson's death certificate.  I certainly learnt more from Christopher Hillman's 'Old New Orleans Blues', John Collinson's 'The Golden Age of Blues Piano' and Alex van der Tuuk's 'The Revival of Paramount in 1935'.  I was especially pleased to see a photograph of John Steiner (who rescued the label) in this latter article.

Some articles promise much.  Howard Rye's 'Opal Cooper & The Red Devils & The International Five' says just about all that there is to be said about this singer (Cooper's picture appears on the front of the book), but, listening to him singing Moonlight on the Ganges, I soon began to wonder if he was worth it.  Accompanied by Leslie Hutchinson on piano (who was, perhaps, better known as the lover of Lady Mountbatten than as a pianist) Cooper's 'novelty' song soon wears thin.  On the other hand, strong recordings by Arnold and Irene Wiley (Windy City and Bo Hog Blues - and Irene leaves us in no doubt as to where that hog is rootin') complement Paul Swinton's 'The Life and Music of Arnold Wiley'.  I'm not too sure about 'American Roots Artwork', a series of sepia paintings based on photographs of singers and musicians.  Why not just print the photographs?  But, there is a picture of Parchman Farm resident Roger 'Burn Down' Garnett, and his Library of Congress track Lighthouse Blues is included on the CD.  I had not heard this fine track before.

There are several pieces devoted to female blues singers and I have often wondered why these tracks appeal more to jazz fans, rather than to blues fans.  I suppose that, at the end of the day, it is the jazz fan who really wants to hear a few more notes from the backing musicians.  And, there are several really good jazz tracks on the CD, put there to illustrate some of the jazz articles that are included in the book.  I cannot really talk about these articles, because they are outside by own knowledge.

To be honest, I don't think that this package is for the newcomer to either the blues or to jazz.  There are certainly a number of better books available for the beginner.  But, if you really want to know everything that there is to known about these subjects, then this book and CD will certainly be finding a place on your shelves.  According to Frog, this is the first in a series of annual publications and we are told that volume 2 will include something on 'The Truth about Robert Johnson'.  Considering just how many books and article have already been penned on Johnson, I really do wonder if there can be anything more to be discovered about this enigmatic singer and guitarist.  We shall just have to wait.