A True Furrow to Hold 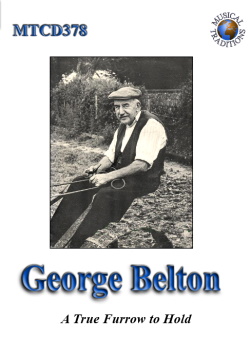 Those who frequented folk clubs in Sussex in the years before 1980 or who attended the National Folk Festival in the years before then will probably remember George.  He was one of a dying breed; a genuine traditional singer who learned his songs from his family or from fellow ploughmen and carters in the farms that he worked on in West Sussex.  When folk clubs came along he was taken to one in Horsham and quickly found a new audience for the songs that he had known all his life.  His cheery disposition and excellent singing voice made him a popular figure in these venues, particularly his local Chichester club where he was to be found nearly every Friday.

Now, forty years after his death Rod Stradling has gathered together recordings of his songs made by a number of enthusiasts, mainly from this area.  The CD consists of 26 songs sung by him as well as an extract from a radio interview with him and somehow, it manages to run for over 81 minutes.  In the main they are traditional songs but there are some from the Music Hall and parlour ballads and all are delivered with the verve and commitment that made him such a well loved figure.

The 40-page booklet has transcriptions of interviews of him talking about his life from interviews with Mary Aitchison as well as the words of all the songs.