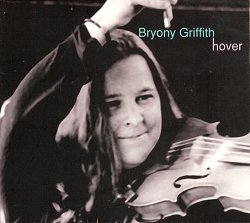 I was glad to get this new CD from Bryony Griffith, as I'd never heard much of her - or any of the numerous bands she's played and sung with - before.  Nor have I any idea of the meaning of the CD's title - 'hover'.  To begin with, it was more or less what I'd been expecting: revivalist fiddle playing of commendable accuracy, with very little emotional input apparent.  We start with two morris tunes; in neither case is the traditional side from which they come mentioned.  Both are played twice through as 6-man dances, but the first has one set of open capers included - I really don't understand why!  It implies that a single dancer would perform this part, but what does s/he do for the rest of the time?  It also implies that s/he manages to stay in the air for exactly the right amount of time to match Bryony's strict-tempo playing ... which is very rare.  Certainly, no hovering was involved!  I find recordings of morris tunes, played for listening, are an extremely uncomfortable experience.

Next we get a couple of nice polkas, played rather too fast for my taste.  Then comes Oranges in Bloom & The Castle Minuet; Bryony seems not to know that I 'inveneted' the first as The Sherborne Waltz back in 1975, and it appeared on the Old Swan Band's first LP, with a bit more 'snap' than here.  The second tune, having many more notes to the bar than the first, seems like an uncomfortable partner to it.  Track 4 is a set of fast rapper jigs - well played, but there's very little else to say about them, except that this track displays the first instance of a feature in one part of a tune not being repeated each time.

Track 5 features fast reels from Yorkshire - I would like to say that I applaud Bryony's choice of lots of tunes from her native Yorkshire, but feel that it's a pity that they are all from printed sources.  There are some recordings of traditional players from this area, but her playing doesn't indicate that she's listened to many of them.  Track 6 is very different - the lovely Radstock came from James Higgins in the Shepton Mallett worhouse, via Cecil Sharp.  The first time a traditional source is mentioned in the booklet, I think.  The equally lovely Wednesday Night is from Joshua Jackson - back to Yorkshire again.  The first track I've really enjoyed.

I have loved the Sadler's Wells Hornpipe since I learned it, playing along with Johnny Adams, and I don't think I know of any decent fiddler who doesn't play it ... and they all manage to sound as if they enjoy it far more than Bryony does.  Next are two more morris dances, and this time the village of Bucknall is cited as the source.  My earlier remaks apply equally here - and this itme we get three sets of slow capers in the miiddle of the first tune, but only one in the second!

But we've got to track 9 and, as last, Bryony begins to sound as if she's enoying herself - 3/2 hornpipes are great fun to play, and she employs some clever double tracking harmonies, which make the listen enjoy himself as well - great!  Much the same can be said about the two Butchers' Hornpipes - fine stuff.  Staines Morris is a very old tune, first published around 1600; but here it gets a pretty 'modern' treatment, with some 'modern' guitar chords from Ian Stephenson, whereas the Lancers was somewhat later - great fun, but I see no reason that thet should make a coherent set.  Finally we get a jig from Joshua Burnett's 1835 manuscript played - it says 'ere - as a slow air.  This displays scant knowledge of the genre ... it really ought to be rather more than just a tune played slowly!

Listening to clips from her earlier CD, Nightshade, it seems that the 'traditional' sources of the tunes on this one seem to have caused her to play in a much more 'formal', strick-tempo way than really ought to be neccessary.  Traditional music can be - should be - fun.