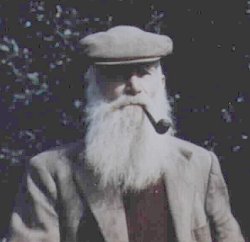 It is perhaps an interesting coincidence that at roughly the same time that we and Bill Leader were recording Bob Hart in Snape, Suffolk, Fred Hamer was recording Harry Green, some fifty or so miles away in Tilty, Essex.  And now, so many years later, the results of those two sets of recording sessions are to be published within a month of each other.

The recordings on this cassette come from the collecting of Fred Hamer, who in the 1960s recorded some remarkable singers from many parts of the country, most of whom had been missed by other folksong collectors.  This collecting was all the more remarkable since Fred was blind.  Five of the songs included on this cassette were transcribed and included in the book 'Green Groves' (EFDSS 1973) but this is the first time that the recordings have been made available.

Harry Green was born in 1874 and lived in Essex all his life.  He moved into the farm cottage in Tilty where these recordings were made, in 1899, and it was there that he died.  He would limit Fred Hamer to five songs each visit, almost as if he was rationing them out so that Hamer would return.  Harry told him that The Nutting Girl came from old 'Singing Jimmy' from around sixty to seventy years ago (in 1967), but he wouldn't sing it if there was a lot of women about, particularly as he would often sing the last line as: 'Perhaps he'll make your belly swell and break your apron strings'.

Harry Green was obviously a real old character, and you can almost see the sparkle in his eye when he recites The Pear Tree or the epilogue to Down in the Fields and Ladies Won't you Marry. 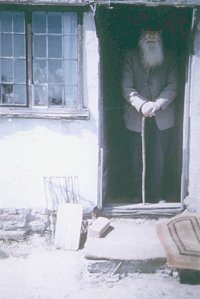 He is still fondly remembered in the Great Dumow area and it is to be hoped that this cassette will continue the interest in his songs.

I was born in this cottage.  Well, we all born in this cottage.  My father came here in 1899.  Him and one of his sisters were both married on the same day and they both had nine children.  My mother died in 1937 and I looked after my father for 32 years after she died.  We stayed in this cottage and I shouldn't think that in all those years he was away for more than two weeks.  He'd never go away to stay.  He'd go for a day and come back, and he wanted to die here - which he did.  He had a stoke on the Monday night, we sent for the doctor, and my brother said ask about moving him to hospital.  The doctor said we'll leave it until tomorrow, and he was in bed all of the Tuesday and he was rambling all the time and singing, you know, and talking to people.  My brother was with him because was he was superintendent for the St John's ambulance in Dunmow, and he died five past twelve - well, into the Wednesday morning and I was with him when he drew his last breath.  If he'd lived another month he'd have been ninety five.  He died the 17th of February and his birthday was the 17th of March . 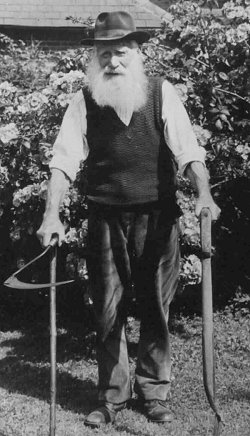 In his young days he used to go up to Chingford and he used to mow the grass.  He used say that he went up to 'the hay country'.  My grandfather used to go with him (my mother's father) and one or two of the others who used to live around here.  Then he worked on the farm for a bit.  Then I think I'm right in saying he worked for the local council for forty years.  He used to do the sides of the roads.  Trim the sides of the roads and clear out the gullies and that sort of thing.  They had to push their tools in a wheel-barrow and they carried a set of rods and when there was a pipe in the bank and the water couldn't get through they had to rassle it out so the water could get through to the ditch on the other side.  They used to call them lengthmen in those days, because they had a certain amount to do and of course it was all done by hand, but of course there wasn't the traffic on the road then as there is now.  Then the council took over doing the hedges and ditches and my father said to the surveyor one day "You are making a big mistake".  So he said, "What do you mean Green?" "Well" he said, "I won't live to see it but you will, and there will be far more water on the road than there will on the fields." And his words have come true - and it's same for prisons.  I'll tell you his exact words, "We'll soon want half the country for bloody prisons" he'd say.

Well he used to sing in the pubs.  He used to have a sing-song with his old friends in the pubs.  He started sing for Fred Hamer up at the vicarage what they now call Abbeygates in Tilty.  Oh, he was a nice man; so was she - oh they were a charming couple.  Well you can tell by the bit he put in the 'Green Grove', and I used to chime in.  He came in with his tape recorder and Mrs Hamer used to sit on the settee and father always sat on a chair.  Oh, father used to get a bit tired because they used to come until late-ish in the evening - well, being well over ninety.  He used say,"If they don't soon come, I'm going to bed".  He'd say to him well you've had so may songs this time, an' that, and then Fred used to show me the copies and ask me was it right.  Of course, it was only as far as I could remember because I was never in the pub when father used to sing these old songs.  One of them The Highwayman and The Merchant's Daughter, he asked him where he first heard that and he said that someone called Bill Patient used to sing it in the Rising Sun which is the pub at Duton Hill. 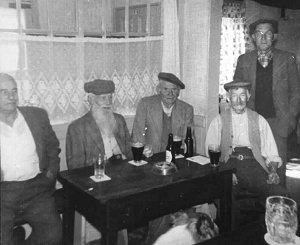 Well, all the old boys are dead now and you know there was more singing going on in the pub in those days, than anywhere else.  They don't do that sort of thing now.  Most of the singing went on in the Rising Sun because his old friends lived there - name of Perry and Ledgerton and Moore.  I did have a photograph of some the old boys who he sang with.  There's Percy Ledgerton, they used to always call him 'Hunch' Ledgerton and George Perry.

I know quite a bit of the Highwayman and then that one Mary Green Loves Me and I Love Her Too - my father copied that from the radio.  He used to sit here and listen to it and he'd got a wonderful memory.  He could remember things from when he was six years old.  If he could've written a book it would have been very interesting.  I used to be able to sing the songs but I'm not able now.  Oh Joe the Boat is Going Over - that was another of his.

There used to be accordion players and somebody would get up and stepdance.  Then there was 'Buster' Brown he used to sing lots of songs.  When we went on coach outings and that sort of thing he'd sing.  Nobody else in our family used to sing.  Father was the only one but I can't remember him singing in the house, not for any length of time.  He might just sing the verse of a song or something like that.  Not like he did when Fred Hamer came along and he'd sing a whole song.

As may be deduced from the date of the above interview, it's taken John Howson ten years to get this project out of the clutches of the institutions and into your hands.  Given that, plus the preceding twenty years since the tapes were made, one is bound to ask "Was it worth the wait?"  My answer has to be "Unforgivable - but, yes; well worth it."

I am aware of very little Essex song or music on record, so this must be considered an important historical document.

Furthermore, that a man of 93 years of age - after a life of hard physical toil in the open air - should be able to sing like this, is quite extraordinary.  A snatch from his declamation of The Pear Tree (sound clip) gives an indication of his vigour.

No only is he a splendid performer, but there is some interesting material here as well.  Harry Green is a man for unlikely couplings of tunes and texts.  The first song is The Merchant's Daughter and The Highwayman, more widely known as The Rich Farmer's Daughter from Chester, but here we find an unusually full text paired with a version of the Fagan the Cobbler tune.  What is particularly intriguing is that the usual tune turns up later on the cassette carrying the verses of She was a Stranger in London.

Both examples work very well in their new situations.  He is also a dab hand at dealing with odd-length lines, and this example from The Merchant's Daughter is particularly enjoyable  (sound clip).

Track 5, As I Walked out one May Morning (The Poor Man's Son) also sports an unusual melody, in this case a very nice variant of The Mermaid  (sound clip).  The Green Mossy Banks of the Lea keeps its normal tune, but in an unusual minor-ish variant - a shame that it's only a three verse fragment.  Thaxted Bells, The Banks of the Sweet Dundee (actually Sweet Primroses) and The Blackguard Gypsies are also only fragments - and I should have very much liked to have heard more of the latter.  Once I courted a Fine Young Lass turns out to be Wop, She 'ad it-I-O - without Bob Copper's splendid 'There goes the bloke with his bum in a sling' final verse.  Both singer and collector seem to enjoy it enormously, nonetheless.

Jones's Ale is interesting in terms of tune, text and rhythm - as is The Nutting Girl (sound clip); a rather more robust version than is commonly found, and uses the same chorus which Hammond heard from John Northover in Dorset.  Despite Harry's reluctance to use the 'dirty' final line in front of Margaret Hamer, I like this very much.  In fact, I like the whole thing very much - as I'm sure you will if you order a copy from Veteran's web site.  Get there via our Links page.