No label, no nomber 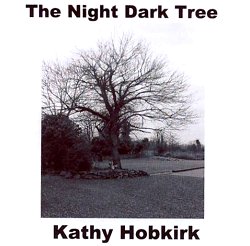 Back in 2003, whilst reviewing Mike Yates' Borderers: Ballads, songs and tunes from the Scottish Borders, Kyloe 102, I wrote:

Kathy Hobkirk is [the late border fiddler] Bob Hobkirk's daughter in law, and a delightful singer who learned some of her repertoire from near neighbour, Willy Scott.  She sings Boys O Boys and The Christenin', and I was sorry to find no more here.  A full CD of her own at a later date, perhaps?

I'm sure my comment was in no way responsible - but here it is anyway!  And it is a true delight.  Kathy was born and brought up in Ayr and has been living in the Border town of Hawick for a number of years.  Hawick is still in Scotland, about 20 miles from the border, and roughly level with Ayr on the west coast.  She sounds exactly like a true traditional singer - yet absolutely not like a slavish imitator.  I could say this of very, very few others!

There's just one song I'm not 100% happy with, and that's Bound to be a Row, which Kathy learned from Willy Scott.  Now I have no problem with singing songs of the opposite gender to one's own (I sing several women's songs), but this song, which borders on the misogynous, really doesn't feel comfortable in the mouth of a woman - to me, at least.

From the very brief notes to the songs, it would appear that Kathy has learned most of her songs directly from other singers, rather than from books.  I think I've heard all the sources she mentions, and would say that she's listened very carefully to them - and then sung the song in her own way.  And her own way is absolutely splendid!  Here's a little of the wonderful Sheath and Knife - maybe the best incest ballad in the canon, in my opinion.

Despite absolutely loving Kathy's singing, and most of the songs, I do have one criticism of this CD - and it's one I've made time and time again in these pages.  The default 2 second gap between tracks is simply not enough - particularly when, as in this case, many of the songs are slow in tempo.  Often a new song will start before one was expecting the next verse (had there been one) of the previous song.  This makes for a very disconcerting listening experience.