Memories from the Holla

Originally from the Holla in County Longford, Peter Carberry will be well known to a lot of English based musicians from his many years in Manchester.  A couple of years ago he returned to Ireland and settled in Galway where he now plays regular sessions. 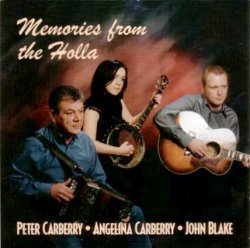 This CD, featuring Peter on accordions and his daughter Angelina on banjo, will be a reminder for those who knew him in England and a real treat for those new to his music.  Ennis based John Blake provides guitar and piano accompaniment and Peter's uncle, also called Peter, joins in on the uilleann pipes for a few old tunes.  Liz Kane on fiddle and Laoise Kelly on harp also contribute to a couple of selections each.

This CD bears comparison with Charlie Piggott and Gerry Harrington's New Road CD (reviewed here last year).  There is an instant accessibility to the music, but lots of the subtleties and intimacy become more apparent with repeated playing.  The choice of tunes too has similarities with Charlie Piggott's repertoire, lots of them are in minor or modal keys.  The most striking thing about the tunes is how few of them are commonly played and it is probably worth drawing further comparisons with the McNamara family CD and Brian McNamara's own solo to show what a wealth of music has gone unrecorded for so long.  The more well known tunes are often played in unusual settings and we particularly like the way they play The Spike Island Lasses and The Master's Return.

The music itself is played at a steady, unhurried pace with the banjo's regular throb complementing the box's open tones very nicely.  There is something very satisfying in this combination and it is one you hear often enough in sessions but not on record.  The modal nature of the music is reinforced by the duo playing a tone below normal pitch for some of the selections.  Following an accident to his hand, Peter changed from B/C fingering to C#/D with help from Martin O'Connor but continues to use the old box.  There seems to be a growing enthusiasm for playing in lower pitch.  Pipers have done it for years but other players are seeking out the mellow tones from flat pitched instruments.

The music on this CD shows a nice variety both in the choice of tune types and in the different combinations of instruments.  Each of the main players takes a solo track.  Angelina's solo features a couple of more modern reels, one of which is linked with Mike McGoldrick.  Peter makes a fine job of a slow air Amhran an Bha paired with the old pipers' slip jig An Phis Phliuch and Uncle Peter plays three piper's reels ending with the Bunch of Keys which is associated with both Johnny Doran and Seamus Ennis.  Occasional other sets are kicked off by a solo instrument.  Laoise Kelly's harp introduces two lovely hornpipes Paddy Connelly's Stack of Barley and Nellie Your Favours I'm Afraid I'll not Gain and the second one of these has a feeling of Junior Crehan about it although there is nothing in the sleeve notes to confirm it.  Great tunes with fantastic names! Angelina introduces another set of reels with The Morning Thrush before the fiddle and box join in on a tune credited as a Clare reel and one of Paddy Fahy's.  The whole programme seems to be very well planned, the selections are well thought out and provide interest and variety throughout the full 50 odd minutes of music.

The production of the CD is up to the high standard one expects these days.  The mix is very good and the music comes over very cleanly with the accompaniment adding to the overall sound.  The sleeve notes are fairly brief and concentrate on documenting Peter's links back to the Holla and his younger days.  There are no notes on the tunes and the track listing is superimposed over a rather busy photo of the musicians so you may find yourself squinting at the back of the CD to identify the tune titles.

Readily available from most of the main Irish music Web sites, this is a record not to be missed.