John Clare and the folk tradition

I knew George Deacon slightly back in the late-sixties, and was very surprised when this book first appeared in 1983 since it didn't sound at all like the sort of thing that he would have become interested in. 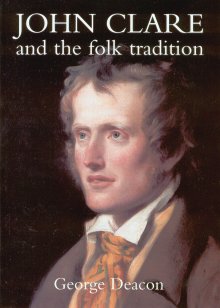 Then I remembered that seven years makes an alteration, and realised that I, too, was into all kinds of stuff which might have surprised people who knew me then.

I was equally surprised when this new Francis Boutle edition landed on my doormat last week, as I'd neither asked for a review copy, nor even realised that it had been published ...  Things are quiet down here in the Five Valleys!

I couldn't immediately think of anyone to send it to for review, and so began reading the odd page here and there when I had a spare half hour - and soon became fascinated.  John Clare was an immensely interesting character, and this is a very interesting book.  But first I should tell you what it's not.  It's not a book about Clare's life - although you do get a pretty good idea of it, but incidentally to the central theme.  Nor is it a book about Clare's poetry - although his poetry is discussed fairly frequently.  No, it 'does what it says on the tin' - it describes the sort of rural community in which he grew up, and makes it quite clear that he was an active part of that community.  It describes his collecting methods and shows who and what his sources were.  It suggests that this connection with the folk traditions of Helpston, Northamptonshire, effected all his writings, and quotes from his poetry, prose and a great many letters in illustration of this thesis.

The book gives the texts and tunes (where given) of all the songs in John Clare's manuscripts, plus many other songs which he has stated that he knew, but did not 'collect', together with his descriptions of customs and village games.  It also includes his famous collection of 263 tunes and the not so well-known dance manuscripts.  All - and most particularly the songs - are very well annotated, if in a somewhat academic fashion by today's standards ... no Roud numbers are given, for example, and the citations are of publications in standard reference works, rather than of other instances within the oral tradition.

But the most important thing about this book is that George Deacon presents a pretty clear and detailed picture of the traditional culture within which Clare grew up, and one which is probably unique for three very important reasons: that the period was the 1820s (far earlier than any other such collecting enterprise); that it was entirely local; and that the observer was a member of the community concerned.  This is why it is so important to the likes of us.  The poet Tom Paulin is also impressed; he says in his Preface that it is: 'a classic work, which brings us so close to Clare that we can almost hear his living voice.  We can also hear his father's and mother's voices, so that a vanished world and a neglected culture comes back with an eager and vital freshness.'

An important aspect of Clare's tune collection, which I've not seen mentioned elsewhere, is that much of it came to him from Gypsy musicians.  In his own words:

I used to spend my sundays & summer evenings among them learning to play the fiddle in their manner by the ear & joining in their pastimes ... got the tune of Highland Mary from Wisdom Smith a gipsey & pricked another sweet tune without a name as he fiddled it ...  At these feasts and merry makings I got acquainted with the gipseys & often assosated with them at their camps to learn the fiddle of which I was very fond the first acquaintance I made was with the Boswells crew as they were calld a popular tribe well known about here & famous for fidders & fortune tellers ...  the Smiths gang of gipseys came & encamed near the town & as I began to be a desent scraper we had a desent round of merriment for a fortnight sometimes going to dance or drink at the camp & at other times at the publick house.'

Spelling and punctuation is Clare's own.

The whole book is well presented and the staff notation of the tunes is very clear.  Being musically illiterate, I can't vouch for the accuracy of the transcriptions, but the text is fairly clear of typos - just the usual things you find with scanned and OCRed texts; missing full stops and words like 'apart' and 'abetter' instead of 'a part' and 'a better', which a spell check won't pick up.  For a 21st century edition, I was surprised to find the word 'Scotch' used several times in Deacon's text, where I would have thought that Scots or Scottish might have been considered more appropriate.  I was even more surprised to find no mention of the fact that the complete John Clare tune collection has for some time been available on the Internet, via the excellent Village Music Project, in ABC format, courtesy of a lot of work by Flos Headford.  Go to www.performance.salford.ac.uk/research/vmp/msroom/Jclare.abc if you want editable files and midi playback.

Enough of small quibbles - this is a very worthwhile purchase, and È15 seems a fair price.  I would recommend it to anyone interested in getting a better picture of where our traditions come from - not to mention 263 dance tunes, 208 pages of songs and their annotations, 13 pages of customs, and 17 sets of dance instructions.

I'd like to end with a couple of short quotes from John Clare's poetry which seem to me to clearly indicate the value he placed on the tradition and the songs:

... as Wantley Dragon or The Magic Rose;
The whole of music which his village knows,
Which wild remembrance in each little town
From mouth to mouth thro ages handles down.

The ballad in the ploughman's pocket wears
A greater fame than poets ever knew.