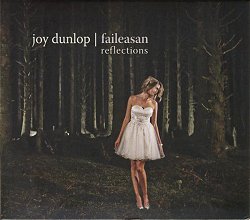 Joy Dunlop's first album Dùsgadh/Awakening came out in 2010, followed in 2012 by Fiere, a collaboration with harp and fiddle duo Twelfth Night that showcased English and Gaelic verse by, or about, women.  Both attracted even more admirers for this singer and step-dancer who combines performance and touring, at home and abroad, with jobs in the Gaelic sector.  Joy has worked in language development, tutoring, broadcasting and journalism, a mix typical of today's active, professional young Gaels.  Many of them - like Joy - are graduates of Sabhal Mòr Ostaig, the Gaelic college on Skye and they have musical skills galore too.  In fact, it's hard to keep up with the flood of CDs by Gaelic soloists and bands - though, I have to confess, my own listening preference these days is an unaccompanied voice and more likely from fifty or more years ago.

However, the idea behind this recording got me intrigued because it's about place and people, the heart of any tradition.  Faileasan/Reflections did not start out as a CD, but rather as a quest by Joy to research the songs of her native Argyll whose Gaelic heritage, she feels, has often been overshadowed by the more northerly areas of the Highlands and Islands.  (My family roots are in Argyll and I agree with that, on a number of levels.)  The project also highlights an enthusiastic commitment to local talent.  After gathering material, Joy first took a group of Argyll musicians on a tour of community halls and the success of that led to the album, with studio recording, backing instrumentation and vocals, photography and cover design also all from within Argyll.

All but one of the eleven tracks are accompanied but the words - ever crucial - do come over well.  Joy's diction is immaculate, her voice clear, bell-like, beautiful.  Instruments are border and smallpipes, whistle, fiddle, bass, guitar, percussion, accordion, harmonium, piano.  I like the effective use of the last on tracks 2 and 7.  The choice of material is wide, with a little of the unexpected too.  A couple of songs are popular on the ceilidh circuit: Buain na rainich taobh Loch Èite/Cutting Bracken beside Loch Etive and Eilean Luinn in praise of the island of Luing.  But Joy's notes are careful always to say who made the song, plus where or from whom she first heard it, whether in a local village hall when she was younger or from an archive tape in the School of Scottish Studies.  An example of the latter is the short, lyrical love song Hi il ò 's na hug i hò ro made by a Duncan Macqueen from Seil island and sung by a farm manager, Peter MacDougall, to Calum Maclean in 1953.  And in a mouth music set, where original authorship is often unknown, Joy's favourite piece does have a known maker, an Iain MacEachern from Islay who tells a neat little 'boy trying to court elusive girl' story in just a few lines.

So, any notion that Gaelic songs are shrouded in misty anonymity is firmly dispelled, perhaps most strikingly for me in the opening track.  For here is Lachlan Livingstone, the last official bard and piper to Maclaine of Lochbuie in Mull.  Lachlan died in 1901 and, along with praise poetry for the Clan Chief, he also put into verse countless local events and characters - as did three of his grandsons in the nearby island of Lismore.  A few years ago I helped Lachlan's great-granddaughter publish the work of this Hebridean song-making dynasty.  And I learned then that Lachlan was also adept at the wry, the light-hearted, the bitingly satirical - types of Gaelic song not always widely heard.  So I was pleased to see the choice of Ma Phòsas mi idir, cha ghabh mi tè mhòr/If I marry at all, I won't wed a big girl.  Lachlan was quite a short man and Joy adds her own humourous aside to the notes.  Elegantly tall herself, she enjoys the irony of singing the disheartened poet's lines, where only a bride 'closer to the ground' would suit!

The only unaccompanied track is Cumha Chailein Ghlinn Iubhair/Lament for Colin of Glenure by the renowned 18th century Argyll bard Duncan Bàn MacIntyre.  This is a big song, in every way, rich in language and emotion.  It is about an actual, controversial, event in 1752, the aftermath of Culloden.  Drive south over Ballachulish bridge into Appin and you can spot the knoll above the loch where the bones of James Stewart (wrongly arrested, they say, for Glenure's murder) were left swaying on the gibbet for years as a warning to any remaining Jacobites.

'S fhad' an sealladh/Distant is my view has a nice touch in a pre-track archival sample of Vatersay's Nan MacKinnon singing a few lines.  Not so well known is the other waulking song 'S Daor a cheannaich mi 'phňg/Dearly did I buy the kiss.  I remember being rivetted to the earphones myself on first hearing the same original tape.  I knew who Dugald MacCormick was, born in the south end of Mull in 1877 and a distant relative of my own, but his whole conversation with Calum Maclean put the songs into a real, still imaginable, community context.  Dugald heard this one as a teenager in Tormor, near his home; the singing was led by Flora Seton (Mrs MacNeil); and it was the last waulking he witnessed in the Ross of Mull.  (The abandoned granite quarries of Tormor are fascinating to walk through and several houses are still occupied.  Listen for the echoes of Flora and her chorus if you're ever there.)  This lilting tune is enjoyable to sing but I'd only heard it once before on disc, where the arrangement was quite ornate and so zippily fast that you feared the tweed would fly clean off the board!  So my preference here would have been for a very spare accompaniment, or none.  But Joy's version does have the steady, melodious rhythm I recall from Dugald's strong delivery, allowing the vivid phrases to come through: the girl would remember that kiss in the barn all her life, until laid out in a narrow coffin, draped in dark silk, hammered down tight ...

Crònan Charsŕig/Carsŕig's Lullaby is new to me and and has a charming story behind it.  After a day on a beach in 1958, a father composed a tune to lull his young daughter to sleep, to words by a friend.  And closer to our own times, too, slightly unexpectedly, are two tracks using the poetry of 20th century Gaelic poets, both highly esteemed.  But the inclusion of these masterfully crafted, lyrical words are absolutely in the spirit of this whole project about a place and its bards.

Sorley Maclean's complex love poem An Roghainn/The Choice is set to music by Donald Shaw.  Joy just fell for the song as soon as she heard it and performs it with great tenderness.  Sorley (brother of folklorist Calum) taught in Tobermory early in his career and he often said how affected he had been by the many ruined settlements in that part of Mull.

Iain Crichton Smith was born in Lewis but spent over forty years in Argyll, half them in Oban as a teacher and latterly in Taynuilt.  Shortly before his death, in 1998, he wrote verses about his adopted village especially for the local Gaelic choir, of which Joy is a member.  The tune is by Mary Ann Kennedy.  This makes a celebratory and moving final track, evoking a landscape of deer on the heights, rose-red berries on the slopes, sounds of the dove in the distance, glimpses of swan on the water, all 'in the shelter of Ben Cruachan'.  It makes me want to head straight back there.  This album is more than a list of songs, but gives a real sense of a part of Scotland rich in history and culture, helped by the informative notes.  (Just a wee caveat about those, perhaps, as they are typeset very small indeed, and in reverse print, so a little hard for older eyes ...)  Calum Maclean once wrote that the material he found in Mull, just one of Argyll's islands, was second only to that from South Uist and Benbecula.  So there's much more still to unearth and I look forward to the next project!