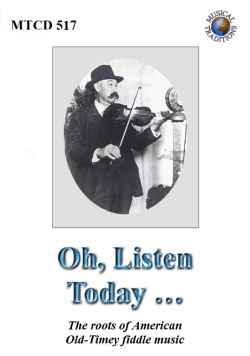 It was Charlie Poole's band the Highlanders, not his better known North Carolina Ramblers, who recorded Flop-Eared Mule in New York in 1929.  With piano and guitar backing, Odell Smith and Lonnie Austin on fiddles, and a compelling (almost) single-note banjo solo from Poole himself (his right hand wrecked playing baseball in his youth), their high-energy version in the key of G makes a great opener for this excellent CD compilation and booklet put together by Mike Yates and produced by Rod Stradling.  The tune itself is a European polka, known in Estonia as Kaera-Jaan, in Ukraine as Dowbush Kozak, to Jimmy Shand fans as the Bluebell Polka, in Ireland as The Curlew Hills or the Little Pet Polka, and in south-east Sweden as Visslarepolska fran Ydra Harad ('Whistler's Polska [not a typo, it really is a polska, albeit a fast and slightly strange one] from Ydre County').  I teach my beginner fiddlers Flop-Eared Mule, so what a delight to have its provenance so fully and lucidly laid bare!  Fire in the Mountain from the Red Headed Fiddlers and Clark Kessinger's version of Jenny Lind, Polka Four, are similarly of Continental origin, but the majority of the thirty tunes here have their roots in Scottish and Irish tradition, with a couple of English hornpipes thrown in for good measure.  As Mike Yates explains in his introduction, it was after completing his project A Distant Land to Roam, in which he had included 'a small number of fiddle tunes to add variety', that he remembered other American tune recordings he could equally well have included.  'And so, the idea of Oh, Listen Today ... was born.'

The New World/Old World correspondence between The Devil's Dream and its Scottish counterpart, The De'il Among the Tailors, is instantly obvious, as is that, despite its title, between Narmour and Smith's Charleston No.3 and The Sailor's Hornpipe, also known as The College Hornpipe.  Sometimes, however, the melodic overlap is only partial, or disguised.  Booth Shot Lincoln from NC fiddler Marcus Martin does not at first sound much like The Market Town (to be found in O'Neill's) because it's a breakdown in cut-time and the Irish tune is a 6/8 jig - two rhythms divided by a common melody?  The A-part of Too Young to Marry (feelingly played in C by North Carolina Ramblers fiddler Posey Rorer) is recognizably the B-part of My Love She's But a Lassie Yet, but his B-part departs from it entirely, based on a quite different chord structure.

The CD and booklet come packaged in a DVD case.  The booklet provides twenty succinct biographical notes on all the featured American musicians and bands, with an additional four-page section of photographs of most of them, including Edden Hammons of West Virginia, African-American 'Cuje' Bertram, Emmett Lundy of Virginia, and blind Kentucky fiddler Ed Haley, 'perhaps the most influential Old Time fiddle player never to have been recorded commercially', who contributes no fewer than five tracks.  This is followed by a section on the music, with entries ranging from the relatively brief note to the fascinating mini-essay, exploring each tune's (in some instances quite complex) antecedents, as well as giving the personnel, date, and place of the recordings, and details of other recordings available.  I found myself flipping enjoyably from page to page and back again, absorbing this wealth of information while listening to the tracks.  It is perhaps the patina acquired by traditional tunes over time that, consciously or not, draws many of us to them in the first place, an intuition of their historical as well as musical resonances, the echoes and ghosts (generally benign) of earlier contexts.  Mike Yates has done a sterling job of revealing and mapping a good deal of this interesting hinterland.  Recommended.