Own label, no number
(can be ordered from https://www.lonesomeace.com/) 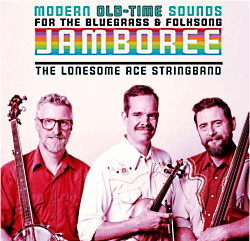 ... or to give it is full title, 'Modern Old-Time Sounds for the Bluegrass and Folksong Jamboree'.  Chris Coole (banjo, guitar, vocals), Max Heineman (double bass, vocals) and John Showman (fiddle, vocals) take a mixture of different kinds of material, and treat it to their own mix of old-time and bluegrass elements.  In the traditional Cluck Old Hen, the big sound of Heineman's string bass charges the performance with a kind of bluegrass energy, while Coole frails his banjo old-timey style, and Showman's fiddle straddles the two.  The other instrumental set pairs Highlander's Farewell, from the great old-time fiddler Emmett Lundy, with father of bluegrass Bill Monroe's Farewell To Long Hollow, the first tune as a banjo and fiddle duet in traditional style, with bass pushing things along on the second.

The Stanley Brothers also had a foot in both traditional and bluegrass camps, so it's not surprising to find one of their songs here, Stone Walls and Steel Bars, which gives the trio an opportunity to display their expert high and lonesome harmonies, as they do also on the Carter's Family's I Never Will Marry.  Gus Cannon's Going To German gets a sparse arrangement with banjo, pizzicato fiddle and the double bass, the last of these prominent in a way that recalls the jug-blowers of Cannon's home city of Memphis.

The remainder of the songs are more modern, and it's a credit to the band that they can take contemporary singer/songwriter fare like Lhasa de Sela's Fool's Gold and Richard Inman's Laketown Blues and make it work pretty well in this kind of context.  Marty Robbins's gunfighter ballads showed what could happen when Hollywood western mythologies met 1950s Nashville, but there's no denying they were clever creations (as were many Hollywood westerns) and again these guys do a pretty good job of making Big Iron sound like something with a bit more of a vintage.  I suppose Hazel Dickens was a singer/songwriter too, but her first-hand experience of growing up in a West Virginia mining family lends Black Lung an authentic power and immediacy, and the band's arrangement does it justice, starting solo unaccompanied and slowly adding layers that build to an appropriately fiery conclusion.

Singing and playing throughout is of a very high standard, and the band's distinctive creative approach lends freshness and character to what is certainly an eclectic song selection.