The majority of these superb recordings were made by Lomax in November 1953 in London, though some were recorded in either Elgin or Turriff a couple of years earlier and the final track, a second version of Tramps & Hawkers was recorded in Edinburgh also in 1951. 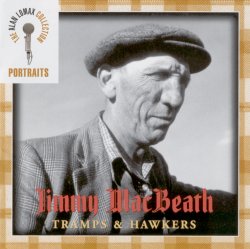 This means that these are considerably earlier recordings than the two Topic LPs that were released of Jimmy’s singing - Wild Rover No More (12T173 - first issued in 1967) and Bound to Be A Row (12T303 - recorded in 1971, first issued in 1978) .  It is also interesting to be able to make comparisons in the way he sings the songs and the way his texts vary, because MacPherson, Tramps & Hawkers and Drumdelgie are on 12T173 and Bogie’s Bonnie Belle and The Magdalen Green are on 12T303.  The words in two cases are substantially different.

With both MacPherson and Bogie’s Bonnie Belle, there are differences in the order of the verses and different verses are included in each recorded version.  Drumdelgie (sound clip) has fewer differences, but there are still some verses, inserted and left out between the two recordings.  By contrast, Magdalen Green is virtually the same in the two versions, recorded eighteen years apart.  One can only speculate at the reasons for this.  Jimmy would have no equivilant of the Copper Family songbook to fix his words and, in any case, Jimmy was, like his great chum, Davy Stewart, an unlettered man, so he only had his memory to go on.  Jimmy would have heard both MacPherson and Bogie’s Bonnie Belle sung many times.  Both were quite well known amongst his contemporaries and by 1971, he had been taken up by the folk revival and he would probably have heard them sung quite extensively.  Undoubtedly he would have picked up other verses on these occasions and changed his own version accordingly.  Magdalen Green is a really beautiful song, but in my experience was that it was not widely known or sung around those years.  Eck Harley had a truly wonderful way with it and sung it at TMSA festivals, but I can’t think that I heard it sung by any other singer.  I would imagine this is why this song remains unchanged.

As well as the songs themselves changing, there is a definite change in the way in the way he approaches his songs.

All the recordings here where he has no audience find him adopting a very different approach from the one that he is normally associated with him; a quiet, almost contemplative approach (sound clip) even to mighty piece like MacPherson that he often delivered in his most declamatory manner.  There is virtually no vibrato in his singing, such a contrast from the way in which he was captured on his first Topic album.  Was this the way that Jimmy generally sung in those days?  It sounds fine, interesting, traditional singing, but not the sound of someone who was making his living singing on the streets.  It could have been that Jimmy was being recorded hundreds of miles away from his usual environment, but the Elgin and Turriff recordings seem to find him in the same undemonstrative mood.

He does sound more like his assured self when he has even a small audience such as Hamish Henderson had assembled for him to sing in a hotel in Turriff (sound clip).  Ewan MacVicar's song notes point to the difference in the two performances of Tramps and Hawkers by saying that 'Jimmy sings almost the same text as he sings on track one, but in his public performance style, not conversationally to the microphone.'  Elsewhere Ewan has written 'Jimmy MacBeath's singing style varied.  It was conversational before a microphone but expansive before an audience.'  True of the Lomax recordings, but by 1967 recorded by Sean Davies (in a studio?) Jimmy could sound quite introspective, as on my favourite of his songs, The Darger Loon but no such adjective could be applied to the way he attacks Grat for Gruel and Johnny MacIndoe, amongst others.

There are other surprises in the repertoire on this album.  There was plenty of the old sentimental kailyard songs in the repertoire of Scots traditional singers during these years but it still comes as a surprise to hear Jimmy singing the likes of The Auld Quarry Knowe.  The Jolly Carter Lad was a song met frequently in the 1960’s in Sussex; it is entirely unexpected to hear it from Jimmy’s lips.

As is usual in this series, the songs are interspersed with passages of interview.  Again, as usual, these leave the listener with mixed feelings.  It is wonderful just to hear his deep-throated rolling brogue again after all these years (sound clip) and we do learn a great deal about Jimmy’s life from them, some of the scrapes that he got into were hilarious and there is much good autobiography as well.  However, Lomax seems to have his own agenda at times when he clearly should just be listening to his informant.  Jimmy started to talk about his experiences in the First World War:

Jimmy MacBeath: And then I ...

What part of the army were you in?

I was in the Gordons.  And then I was in the RAMC, the medical Corps, the Royal Army Medical Corps.  And I got transferred into the Gordons, I went in ... eh, a fightin’ unit.  And ah went tae France.  I got wounded in a place called Passchendaele Ridge.  And ...

How did you like the Frenchwomen? MacBeath: Oh, they were good, oh my God, they were ... Lomax: What did you say to them?

Does anyone else get the feeling that Jimmy is being trivialised here? I’d have been more interested in what happened after he got wounded.  This is only one example, there are others, of Lomax trying to project his notion that Jimmy was very much a ladies’ man.

Elsewhere, Jimmy is telling a good traditional story; not a thing that he had a reputation for, but something you might have expected him to be able to do.  Lomax would never have interrupted his singing - but in the middle of the story:

MacBeath So they went down and they played the cards the whole night.  And those come back and the one didn't tell tae the other.  And when they went down this Sunday, they worshiped the devil, the devil neared to them.  The real devil, the real devil appeared to them.  And this is when Portsoy was pretty young at the time ... the town of Portsoy was pretty young at the time ... and small ... and he appeared to them.  And he chased, he tummult, he come, appeared to them in the room and he upset the table, and everything, and they went home and they wouldn't ... and the one wouldn't tell to the other, and next day ... next morning, the shopman hanged himself ... McRobbie.  He was gotten hanged in his cellar ... he hanged himself.  And Johnston ... he cut his throat.  They all ... they all got a bad death ...

How did they worship the devil? Did your grandfather tell you that? What they did?

They believed, you see.  they thought that the devil was more powerful than God.

I know, but there are various things that people do when they worship the devil, and I wonder what these people did up there.  Various dirty tricks that they do.

But you know, in order to ... to placate the devil you have to pray in certain ways ...

Later in the story, Jimmy appears to be learning to ignore the interruptions:

Macbeath: ... they thought that the devil was more powerful and they believed what he said ... what he said to them was more, was more handy and powerful than what the Goddle was.

Eh, Jimmy, are there any haunted houses around your part of town?

Yes, and when he went up, and when the devil appeared to them the next day……

It may be that these excerpts say more about my own misgivings about the careful way that traditional performers should be approached than it does about Lomax.  Some may just feel that he is being direct; I feel that he is being a bit brash.  Certainly, Jimmy could stand up for himself whenever he felt he needed to.  I remember overhearing Jimmy asking Hamish Henderson for, and being refused, more money for drink at a Blairgowrie Festival.  The quality of the MacBeath cursing of Henderson was certainly Premier League stuff!  Elsewhere in the interviews, Jimmy is accorded proper attention and we learn many things about his life and his attitudes.  He had worked as peddler, harvester, blacksmith, soldier, in Canada in lumbercamps and painting fishing boats, but he makes it clear that hard physical work held no appeal for him.  'Trampin around and singin' were much more to his liking.

The booklet contains three fine photos of the man, full transcriptions of the words and notes on the songs and both of these are in the capable hands of Ewan MacVicar.  We don’t learn much that is new about the man from the notes.  MacVicar’s essay is virtually the same one as is found in the companion Davy Stewart album.  Hamish Henderson’s essay is a fine and insightful one but is has appeared in print before in Tocher magazine and in the collection of Hamish’s writing, Alias MacAlias.

As has become commonplace with this series, there is a lack of attention to final detail that has a small spoiling effect on the whole.  The tracks are again misnumbered in the tray text - we have two tracks 22 this time and some of the track durations are given as ?.??; nothing major, but the sort of thing that a proof reader ought to be picking up.

The booklet also details the ways in which these historic recordings have been digitally cleaned up and the outcome is some very pleasing sound quality though there are a very few places where it is possible to detect that the recording level was set too high and the microphone was being overpowered.  Their quaility is every bit as good as the later recordings made for Topic by Sean Davies and then by Peter Hall.

You can hear that Jimmy is younger in these recordings and although his pitch is more sure and his timing is more controlled than it was later, the subdued Jimmy MacBeath that is heard here is something of a shock.  He was, after all, one of the finest performers of traditional songs ever to stand on a concert stage.  He was a great entertainer by any standards.  Now, it is not necessary for a good traditional singer to be a great stage entertainer, but it was a great bonus that he was both.  The Jimmy MacBeath that I remember is exemplfied in that first Topic album, with Jimmy really going for it in his singing, wilder, more mannered with that strong vibratos and less accurate in his pitch than he is here, but ultimately more satisfying; not that I would be without these recordings for the world, especially as a great majority of them have not been available on commercial recordings before.