Unaccustomed As We Are 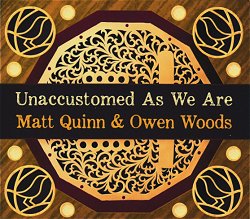 In several places in the press release that came with this CD, the words 'dance music' appear.  Certainly, the tunes are, or could be used as, dance music ... but I feel that this is a CD of music to be listened to.  That's probably just as well, since CDs of real dance music are rarely all that successful.

This one does work in that it features a very varied selection of good tunes, played really well by two extremely accomplished musicians.  The tracks are about half and half traditional and modern composed ones - frequently by Matt or Owen themselves.  It's also very well recorded.

Said press release also includes the sentence: Our approach to arrangement starts with the tune and grows organically outward, never losing sight of where we started.  I'm pleased to say that this approach is rarely evident - most of the tunes, particularly the traditional ones, don't get mucked about with to any real, or detrimental, extent.

Let's have a look at those traditional tunes - particularly the English ones, as I'm ill-equiped to comment on Québecois music.  The first comes as track 3, The Whitefriar's Hornpipe, a truly wonderful tune that sounds a bit as if it's a 3/2 hornpipe - but isn't.  The notes say that it has a seven-bar A music in Offord, but they accidentally shortened it to six and a half.  Not being a music reader, I can't comment on the Offord setting ... but I've never heard it played differently to the way is on this CD.

Next we get Brighton Camp on track 5.  This is played very straight, with only a few extra twiddles to separate it from the 'normal' version.  It's slightly odd to find this very four-square polka matched with what they describe as a 'crooked' Québecois tune.  Another reason that this isn't a dance music CD.

I haven't mentioned that almost all the music on this CD is played at what I consider to be just about the right pace - except for track 7, which I feel is rather too fast for the tunes ... and track 8, From Night till Morn which is very slow indeed!  Ah, well - different strokes!  They also comment that this is the full 40-bar version but, again, I've never heard it played differently to this.  The last English tune starts track 11, The Steamboat Quickstep, which I was expecting to be one of the two different versions of the Steamboat Hornpipe I know.  But no - it was found on John Kirkpatrick's A Banquet of Boxes record, and sounds familliar to me ... but from where or when?  It's a nice tune, and they make an interesting join between two of the iterations.  I love it when you can do that to a tune!  Most of the modern tunes are pretty good, too!

I have to say that the title, Unaccustomed As We Are, seems odd in the light of Owen saying 'Myself and Matt have been playing together for years'  Ah, well.