For me the key to understanding this selection is Track 8, in which Josie McDermott lilts a pair of reels.  If you've ever tried to lilt a pair of reels you'll know how difficult it is.  Josie takes it nice and steady, with superb breath control (a lifetime of flute-playing helps), light in the upper register and more resonance and timbre coming in for the lower notes, just exactly as they would on the chanter. 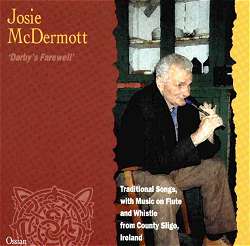 All the phrasing is perfectly natural, no gasps for breath half-way through, the 'words' seeming to match the music naturally, as they should.

Then listen to Josie sing those fine old airs Moorlough Mary and Una Wan.  Again you can hear the same characteristics of tone and timbre, easy phrasing and effortless ornamentation in the traditional style.

Sligo is a wild enough place, with plenty of hedges, bushes, copses and thatches for the prevailing westerly winds to whistle through, creating infinite variety of inspiration for traditional musicians; under the circumstances it is hardly surprising that it's always been a great area for flute-players, with a distinctive repertoire and instantly recognisable style.

Josie McDermott plays the flute with a fine wild wind alongside of him.  It is vibrant, full of life and heart and soul.  It is not a style that will appeal to lovers of James Galway, or for that matter possibly even some of the Irish Traditional Music aficionados of recent years.  Josie won his musical trophies in the late sixties and early seventies, competing against and judged by his peers in the flute-playing centre of the West of Ireland.  To be exact, he took the title in 1964 for tin whistle, in 1967 for lilting and in 1972 for flute, all of which underwrites the quality of this disc.

For the last thirty years competitions of traditional music have been held under the tutelage of Comhaltas Ceoltoiri Eireann (the Society of the Musicians of Ireland).  An All-Ireland title is hotly contested, is won on quality of musicianship and brings recognition and musical opportunity to the winner.  However, I am inclined to the view that this has also had the effect of creating an 'officially approved' style to the playing of traditional music, and channelling young players into that style (as a pre-requisite of winning the competition), at the expense of personal and local variations of approach and technique, prejudged as contrary to 'accepted practice'.

The upshot is that if Josie was able to compete today there is every chance that he wouldn't get a place.  His style would not conform to what is considered now to be the correct standard.  His choice of melody would not include the latest fashionable pieces, composed to show off fancy 'approved' technique.  As for his practice of 'tonguing' the whistle for triplets, like the pippety-pop of a tight piper, instead of rolling and cutting - well, that would probably be picked on by the adjudicator as a serious fault.

Maybe that's why I enjoyed this CD so much - it reminded me of my early days in Irish music.  You can sit back and listen to this CD and enjoy the clear, uncluttered melodies on flute and whistle, expertly played and as fresh and healthy as the Sligo air that produces them.  Plenty of old Connacht favourites - and one or two composed by Josie himself.  Savour the airs and the words that go with them.  This is a delightfully balanced performance from a man who is as comfortably relaxed as if he was roasting his shins by his own fireside and perfectly at home within the heritage of his music.

Not to say that Josie confined himself to the traditional stuff.  In his younger days he played and toured with show bands and jazz combos, delivering the business on trumpet and saxophone (upon which he also once took an All-Ireland title in the 'miscellaneous instruments' category).  In his later years he was the author of several 'Musical Plays' mirroring local Sligo characters and life, which were performed locally and in many Irish communities abroad.

Incidentally, Robin Morton's original sleeve notes have been replicated here, and very informative they are too.  They help significantly with the listener's understanding of Josie McDermott's style and approach.  It is a pity that the producers of this CD could not see fit to add that Josie McDermott, born in Coolmeen Co Sligo in 1925, died in 1992, having become blind thirty years previously.