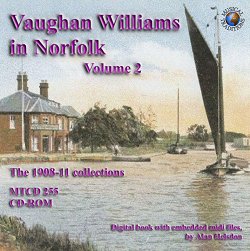 I reviewed, most favourably, Vaughan Williams in Norfolk Volume 1 for EDS when it was published in 2014.  Alan Helsdon, well known for his work on Norfolk dance, tunes and songs had produced an extremely ambitious publication in digital book form with embedded Midi files.  It was extensively researched and beautifully produced with copious references to enable the curious singer to find the originals of both words and tunes.

This second volume, which I praise with just as much enthusiasm as Volume 1, is equally generous in its information and detailed lists of sources.  The biographical details of the singers, their locations and occupations are both interestingly and extensively included on the CD-ROM.  Alan Helsdon has delved deep into Norfolk genealogical records.  I suspect he spent many long hours in the magnificent Norfolk County Records Office consulting records of marriages and baptisms, judging from his naming the witnesses to marriages of source singers.  Vaughan Williams, who was more interested in the tunes than the background stories of his sources left many questions unanswered about who sang to him and what they did.  Alan has tried, with great success, to fill in the gaps and one can feel his frustration in many cases where definite answers are not forthcoming.  He comes up with a good candidate for 'Blue' Fisher, contributor of the Horse Race Song which mentions Newmarket Races.  I have always wondered who he was.

Ralph Vaughan Williams biography by his second wife, Ursula, has been interrogated and found rather wanting for the years in question.  This is unsurprising as Ursula was not even born until 1911 and her biographical focus was on RVW's compositions rather than his youthful forays into the wilds of the countryside.  Thus, an unavoidable amount of conjecture has been used in working out the itineraries for the collecting trips.  They are illustrated with OS maps of the period and several archive photographs and modern ones for comparison.  I was delighted to see Alan's recent photo of the Old Workhouse at Pulham Market (Depwade Union) now converted into comfortable flats, one of whose elderly residents I used to visit.

As with Volume 1 of the series, every song and tune that was collected is rendered in clear staff notation.  For non-readers of music there is a MIDI file associated with the page just a click away.  Some of the texts of the songs were recorded by his occasional collecting companions, S Mercer and Ivor Gatty in 1908, followed by George Butterworth in 1910 and 1911.  What pleases me most about this collection is that Alan has painstakingly tracked down texts that were never recorded by RVW and his companions at the time of collection.  Some come from recordings of local singers, notably Walter Pardon and Sam Larner; other researchers' work, such as Roy Palmer has also been drawn on.  Still more texts were found as local broadsides held at the Norfolk Heritage Centre or published on the Bodleian broadsides website.  Alan's detective work enables this huge body of work to be reclaimed by today's singers with very little effort.  All the work has been done for us.  Thank you Alan!

There are copious references to allow the reader to track down the original source material in both manuscript and digital form, should you want to check the data.  Links to the songs on the Full English website are yet again a very easy 'one-click ' away.  I commend the foresight in making this CD-ROM multi-platform.  We are not all WIndows fans.  I am writing this on a Linux PC, but have accessed it with ease on my Windows laptop.  I dare say if I had a Mac other than an iPad, it would work just as well on those.  There is a menu bar at the top of the page allowing one to move between the screens for Contents, Introduction, Singers & Songs, Itineraries, Sources, Songs published in the Folk Song Journal etc.  It couldn't be easier.

This CD-Rom condenses a wealth of research into a tiny space.  The work that has gone into producing it is phenomenal.  It is a labour of love.  It is available for £12 from the Musical Traditions Records website - www.mtrecords.co.uk - and worth every penny of the price.