Scottish Tradition Series, volume 21
from the School of Scottish Studies, University of Edinburgh

Over the years a number of respected Orcadian singers, musicians and storytellers have been featured on a number of LPs and CDs and in several books.  Some of Ethel Findlater's fine songs were to be heard on the Folksongs of Britain LPs, 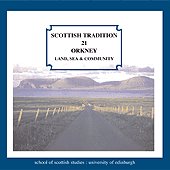 first issued by Caedmon Records in America and later by Topic Records, and, of course, John Sinclair's superb version of The Grey Selkie also appeared in this series (12T194).  Fiddle players Hugh Inkster and Pat Shearer can be heard on volume 9 of the Scottish Traditions Series (Greentrax CDTRAX9009) and Hugh Inkster was also included on a Folkways LP Music from the Orkney Islands (Folkways FW8470).  In 1965 Sean Davies, who had recorded John Sinclair, issued an EP by the Jim Garson Trio under the title Orcadian Dance Music (DTS EF2).  But these recordings were all issued years ago, and so it was with delight that I received a copy of this new CD.

The album, produced and annotated by Dr Nancy Cassell McEntire, comprises recordings from the archives of the School of Scottish Studies and is divided into three sections.  Tracks 1 - 11 are concerned with Orkney farm life and recall harvest celebrations, recipes, animal behaviour and related beliefs and customary practices.  Tracks 12 - 21 contain sea beliefs, songs and stories about selkies and a legend about an Orkney crofter who saved a man from drowning.  Finally, tracks 22 - 34 deal with community matters, such as love, marriage and family life.  There are also jokes and tall tales, as well as a legend about the social implications of prophetic powers.  Most of the recordings - of excellent quality - were made by the late Dr Alan Bruford and mostly date from the late 1960s.  I like the idea of dividing the CD into three parts - which makes for easier understanding - but, as several of the performers appear in more than one section, I think that for purposes of this review it will be best to split the material into three different categories, namely, spoken traditions, instrumental music and, finally, the songs and ballads.

Fourteen of the CD's thirty-four tracks are devoted to the spoken word.  Ethel Findlater, who may best be known as a singer, tells of 'The Orkney Muckle Supper', the feast held after the harvest had been gathered, how to make 'Beesmilk Pudding, what Orkney dances were like (and gives examples of diddling) and 'How to choose a wife'.  This latter story is also printed in Scottish Traditional Tales edited by Alan Bruford & D A MacDonald (Edinburgh, 1995.  p.  272), where it is called 'Paring Cheese'.  This reference is omitted from the booklet's notes.

James Henderson gives us some examples of the lore surrounding cows - including help in protecting them from the fairies, and it is fascinating hearing him recall that the word trows (from the Norse trolls) was previously used by his ancestors.  There is also a telling answer to Alan Bruford's question, "So people saw them (ie the fairies) dancing?"  "Oh, those people saw them." he replied, "But I think when the home-brewed ale became less there were less fairies.  Oh yes."  His selkie story 'The Seal Woman' is, however, 'told with an open mind', suggesting that belief in selkies is still widespread.  James also gives us the humorous story 'Tea Boiled Clean' where a lady, who has never made tea before, boils the leaves which are then presented on a plate, the water having been thrown away.  Other jokes and tall-tales are told by John G Halcro, John Dass and Neil Leask.

Beliefs about the moon are given by Lana Fotheringhame, and I am struck by the similarity of her stories to those found by Cecil Sharp in the Appalachian Mountains of America, while John G Halcro tells of 'Sea Beliefs'.  His comment, "Don't whistle on board the boat.  Don't talk of rabbits.  Don't mention a minister", reminds me of the Sussex fisherman and singer Johnny Doughty, who once told me that fishermen in Brighton would refuse to go to sea if they saw a rabbit on their way to their boats.  Mr Haklcro also talks of 'Second Sight'- a belief still widespread in the west of Scotland.

We are told next to nothing about William Thomson, except that he was 'one of Orkney's finest storytellers', though in his photograph he is shown working on a net, so he may have been a fisherman.  He certainly lives up to his reputation with the story 'The Stolen Dress', although his joke 'The Minister and the Tinker' fails to get a laugh from Alan Bruford.  'The Stolen Dress' is described as a true story and tells of a silk dress, given for saving a seaman's life, which is exchanged for one made of cotton by a jealous bailie.  It is the sort of thing that just might have happened, but then we may say the same for so many folktales and legends.

Now, on to instrumental music.  Hugh Insker, born 1910, was a remarkable fiddle-player and plays a total of ten tunes on eight of the CD's tracks.  Listening to him closely I was struck by the fact that, at times, he sounds more like some of the East Anglian musicians in his approach to playing.  (Or even an Appalachian fiddler on the Shetland tune New Year's Day in Da Morning).  Turning to the booklet notes for The Fiddler and his Art (Greentrax CTRAX 9009), I was not surprised to find that Hugh had played in jazz bands as a young man and that he 'was the first to suggest that his playing was not typical of any Orcadian style.'  The Orkney Strathspey and Reel Society provide three waltzes on their single track.  I am not a great fan of massed fiddle and accordion bands - and this track does nothing to change my mind.  The whistle-player Peter Pratt, however, is something altogether different.  I remember seeing one of Peter Kennedy's photographs of Peter playing his whistle to the seals and, listening to him for the first time, I too am also charmed.  Sadly, we only get two tunes - Harvest Home and Peter Pratt's Polka, this latter accompanied by Mark Johnston on guitar - but they are splendidly played, and, by way of a bonus, there is a track of Peter talking about Orcadian wedding customs.

Finally, the album contains seven songs.  There are two Child ballads (The Maid o'Cowdean Knowes -Roud 92 Child 217 - and The Grey Selkie - Roud 197 Child 113), a couple of broadside ballads (The Dark-Eyed Sailor - Roud 265 Laws N35 and The Greenland Whale Fishery - Roud 347 Laws K21), a Scottish song (I'm Weary Night and Day - Roud 5555), a children's song (Mr Frog - Roud 16) and a more modern piece (Sleepy Laddie).  Ethel Findlater's Cowdean Knowes is an incomplete version and we are not told that the girl's suitor is a Laird.  The version is quite different from the one that Stanley Robertson sings on volume 6 of The Voice of the People (Topic TSCD656).  John G Halcro's version of The Grey Selkie, learnt from his father, is also only a fragment - in this case of only two stanzas.  A transcription of a far longer version, collected from James Henderson of South Ronaldsay (also John G Halcro's home) by Alan Bruford, can be found in Roy Palmer's A Book of British Ballads (Llanerch.  1998.  pp.56 - 58).  This is the same James Henderson who can be heard telling stories on this CD.  Dr McEntire fails to mention this reference and, surprisingly, also omits to mention John Sinclair's version of the ballad.

There are also no references for the Scottish song I'm Weary Night and Day although there are a number of versions in the Greg/Duncan collection (Vol.  7 pp.  116 - 19) and a single text in John Ord's Bothy Songs and Ballads (Paisley.1930.  p.150).  We do find a few references for The Greenland Whale Fishery, though not for The Dark Eyed Sailor, but this does not detract from the fine quality of the singing.  In fact, all the songs are well sung and are well worth hearing.

Mr Frog is an interesting version of The Frog's Wedding.  This is clearly an American version of the song, as Dr McEntire points out, and I am reminded of the Scottish Traveller Duncan Williamson whose version of The Farmer's Curst Wife is clearly similar to that sung by the late American singer Hobart Smith.  In both these cases it would seem that British songs have travelled to America, before returning to these shores in somewhat altered forms.  The final song, Sleepy Laddie, was composed by Allie Windwick, who worked for most of his life as a linotype operator for The Orcadian, and is beautifully sung by Ingirid Jolly, a member of the Orkney band Hullion.

Orkney - Land, Sea & Community is a fascinating CD.  I like the way that it is split into its three component parts, and the songs, music and lore do give us some idea of what it must have been like to live in Orkney until quite recently.  In fact, some of this material is probably still relevant today.  My only criticism has to be that the booklet notes are often inadequate.  Although this is a forty page booklet (with full transcriptions) I still feel that I do not really know the people that I am listening to.  The booklet also includes a Bibliography/Discography (though as only two recordings are listed, the term 'Discography' is something of a misnomer) and I fail to see why certain of the books, which have little to do with the CD, are listed.  Sadly, there is no mention of John Firth's valuable Reminiscences of an Orkney Parish.  Together with Old Orkney Words, Riddles and Proverbs (Stromness.  1974), a book which should have been included.  There is also a two page Glossary.  Mention is made in the Booklet's short introduction of the Norse-influenced dialect, called Orkney Norn.  But, the Glossary fails to indicate the origins of any of the words shown.  One word that interests me is tod, the Scottish word for a fox.  It was also once widely used in the north of England - the word becoming dod in my part of Northumberland - and stems from an old Middle English word.  Beatrix Potter knew the word, which she used in the title of her book The Tale of Mr Tod.

Do buy this CD.  The Scottish Traditions series is one of the most valuable sets ever to have appeared and this volume has been long overdue.  It is not everyday that you can truly hold a people's culture in the palm of one hand!