The Days that are Gone 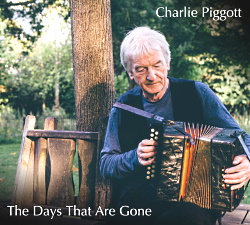 Charlie Piggott from Cobh, County Cork first appeared on the Irish music scene as the banjo player with the group De Danann back in the 1970s.  Since an accident took off the tip of one of his fingers he's been better known as an accordion player and has made two previous recordings, one with the trio, The Lonely Stranded Band and his lovely CD of duets with Gerry Harrington.  This is his first solo recording, featuring a wide variety of tune types in unusual and rare settings that illustrate Charlie's eclectic approach to collecting and playing Irish music.

Jigs are the most common tune type and the CD starts and ends with a set of jigs.  The settings are all uncommon ones that fit into the modal pattern that characterises a lot of the music from the West.  The setting of Old Man Dillon, here called by its source John Naughton's, provides a good example of the subtle twists in tunes that make Piggott's playing such a joy to listen to.

The recording includes a number of marches and polkas played as marches.  Some are associated with the Dingle Fife and Drum Band and come from Charlie's maternal grandfather who had been their bandmaster.  Many might be surprised to hear Charlie play one march as a duet with himself on Clarkes tin whistles.

Charlie has previously recorded a march known as Bonaparte Crossing the Alps and on this CD he gives another related melody called the Battle of Waterloo.  The similarities are clear but the melodies have distinct characters and Charlie suggests this is the older setting.

The reels on the CD include a lovely old setting of Down the Broom from a fiddler from Armagh.  The tune fits perfectly under Piggott's fingers and is one of the highlights of the CD.

On most tracks, Charlie is accompanied by long standing musical friends Garry O'Briain on piano and mandocello and Johnny 'Ringo' McDonagh on bodhran.  The accompaniment is tastefully mixed so as not to intrude on the lead player.  For one set of reels, Charlie's son Rowan joins on fiddle for a selection that includes a reel jointly composed by the pair.  The tune refers to Corcomroe Abbey just outside Bellharbour, where Rowan was baptised.  While a little modern in style this reel fits well within the tradition and feeds nicely into the Drunken Landlady which Charlie has been playing since the his De Danann days.  Rowan also features in duet with his mother Frances Marriott on a tune composed by her.  There is a bond between close family members that adds something magical in their shared understanding of the music.

Charlie has had a long interest in sean nós singers and slow airs and on this CD he offers a fine setting of the song air Sweet Kingwilliams Town.  The variety of tune types is rounded out by the inclusion a pair of walzes, both with American connections.

The production, mixing and presentation are all first class, and the CD brings out Charlie's interests and personality very well.  It showcases his deep understanding of the music and his relaxed and lyrical style is reinforced by his use of harmonies through the left hand bass chords.  The music has a steady lift without being in any way hurried that keeps the listeners attention right through the full forty odd minutes of music.  Charlie provides a few notes on the sources of each selection of tunes.  An absolute joy to listen to, and available from Charlie's website www.charliepiggott.net  or Custy's www.custysmusic.com  this is a CD that should be in the collection of anybody wanting to hear traditional Irish music at its best.