The Trip We Took Over The Mountain 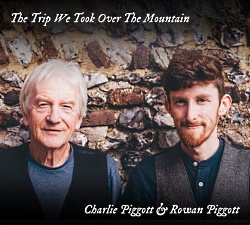 This is a very pleasant surprise. Only 12 months ago we reviewed Charlie's long overdue solo CD and now we have a CD of duets with his son Rowan.  Most of the music here was put together on a trip from Miltown Malbay to Rowan's birthplace in Kinvara on the South side of Galway Bay through the fertile rocks of the Burren, one of the most beautiful areas in Ireland.  The title of the CD recalls that journey and the tune associated with piper Willie Clancy.

Charlie Piggott introduced me to the wonderful compositions of Paddy O'Brien back in the 1990s and the opening track features one of Charlie's favourites, The Trip to Bantry paired with an old tune attributed to the 18th century piper Walker Jackson from Limerick who was a pioneer of the uilleann pipes.  The playing is taken at a steady pace, tightly matched on accordion and fiddle.  Rowan double tracks on cittern accompaniment matching his dad's moody left hand chords on the box.  This is followed by a pair of reels, a version of the Pigeon on the Gate with Joe Cooley's version of the Morning Dew that Cooley recorded on acetate with the Tulla Ceili Band in 1949 some time before he emigrated to America.

The eclectic mix of tune types and rare settings from Charlie's solo is mirrored on this CD with selections of polkas, slides, reels, slip jigs, hornpipes as well as airs, marches and songs from Rowan.

Charlie's interest in sources and influences in composition and variation is highlighted in the transition of the Scottish pipe march The mist covered mountains of home into Junior Crehan's composition The Mist Covered Mountains.  Charlie's version of the jig is not the hackneyed setting that gets blazed out in too many sessions.  This is a gorgeous piece of playing from both men.  Later on the recording, Charlie adopts a similar approach with a jig composed in honour of Paddy Fahey based on an old slow air melody.

There are three songs from Rowan, two in the grand air tradition translated into English.  Seán Ó Duibhir A Ghleanna, or Sean O'Dwyer of the Glen, is a lament from the Williamite wars and it's followed by a lovely old version of the set dance of the same name.  Molly na gCuagh Ní Chuilleanáin is an Ulster love song set to music written by Louth singer and flute player Eithne Ní Uallachain.  The third song is Rattlin' Roarin' Willie which is associated with Johnny Moynihan.  Rowan has a lovely clear tenor voice which on this song is very reminiscent of Johnny in his prime.  All the songs are well arranged with tastefully atmospheric accompaniment using combinations of box, fiddle, shruti drone and cittern.  If you enjoyed these songs you should investigate Rowan's solo CD Mountscribe featuring a few more songs as well a couple more tracks of tunes with his dad.

Recorded and mixed by Rowan, the sound of each instrument is well balanced and the overall production is high quality.  At just over 45 minutes you're left longing for just one more set of tunes.  Very highly recommended, it's available in the UK from Rowan at https://www.rowanpiggott.com/cds.html or, in Ireland, from Charlie at http://charliepiggott.net/ as well as the usual Irish outlets.