The First of My Rambles

This re-release of a Veteran cassette on CD is among the first of John Howson's current venture, bringing Veteran a little closer to the present day.

On first hearing Róisín White some years ago at Sidmouth I was very puzzled. 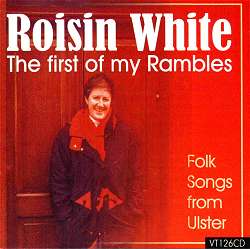 Several dear friends, whose opinions I respect had said "You must hear her, she's very special".  She was indeed special, and I really didn't like it at all.  The very plain, strident, almost aggressive northern Irish style was outside my understanding; the northern Irish singers I had heard were Paddy and Bridget Tunney, Sarah Makem, Robert Cinnamond, Eddie Butcher, Maggie Murphy, the outrageously wonderful Geordie Hanna and his sister Sarah Ann O'Neill, Kevin Mitchell, and of course the gorgeously lyrical Paul Brady.  None of these had prepared me for the rather Scottish 'marching band' style of Róisín White.  I have to say I know better now!  Over the years I have been wooed and learned to love Róisín's up front, no nonsense, but ultimately seductive singing.  [Also, in this time, I have had the chance to listen to several other, less well known, northern Irish singers , such as those recorded by Sean Corcoran in Fermanagh - thus expanding my own experience.]

On first hearing this CD, I was disappointed.  The cassette was made nearly ten years ago, and as my appreciation of her music has grown so has the quality of her performance.  I do believe that she is a far better performer in 2000 than she was in 1991.  That said, and having had the CD around for several weeks, I find it has grown on me immensely.

The cassette from which it comes is a mixture of what John Howson calls 'essentially field recordings made in various quiet locations' as well at four live tracks recorded at the National Festival at Sutton Bonington.

A few lines on some of the songs:

Many years ago I was enchanted by the tune of an American Grey Cock which Peta Webb used to sing.  Here it is again as True Lover John, learned from Len Graham; a similar tune and text, as alluring as ever, but Róisín's punchy style strips away the sentimentality sometimes found in American songs.  Incidentally, Peta also now sings this version in duet with Ken Hall, taking on a little of the 'Ulster measure'.

To stay with the 'measure' a little longer, many more 'flowery' singers would approach Joe Holmes' Apprentice Boy very differently, but I can think of few who would do it such justice.  How wonderfully refreshing Róisín's style is, once you've become acclimatised to it.

Okay, I haven't quite finished!  Listening to her singing Craigie Hill is an extra pleasure that creeps up very gently.  This song, from Paddy Tunney, is sung by every Irish singer, experienced or tyro, at every Irish singing weekend, from Forkhill to Feakle.  It is very much loved, and always well received, but often even the best singers find it hard to shake off the ghosts of others' performances.  Not so Róisín.  It does not seem that she has set out deliberately to shut out the 'ghosts', much more that the woman and the style are indivisible - so much the better for her.  And if she has me fooled, and it is all meticulously calculated, it doesn't show as far as I'm concerned, and what is more important, it doesn't intrude on the music but enhances it.

Having said all that, there is an exception to this lack of 'ghosts' - Van Dieman's Land [sic] has taken on a little of the grandure of Robert Cinnamond, of whom, according to the skimpy notes, she has made a special study.  However, this shadow of a mentor is certainly no bad thing, especially when it is used with wisdom and subtlety.

I do find these skimpy notes a problem.  We have been very spoilt of late, with Topic and MT recordings coming with mini-theses attached: and John Howson's forte is putting out bloody good recordings (long may he continue to do so); and he is not necessarily a 'words' man; and he's working on his own.  Nonetheless, it might be necessary to consider upgrading the packaging of future Veteran CDs, as comparisons will certainly increase expectations.

Altogether there are 14 tracks, and as I said at the start, they are not all as successful as they would be today, but there are lovely songs, some smashing performances, and as things stand at the moment, that's all the recorded Róisín White available, so make the most of it.