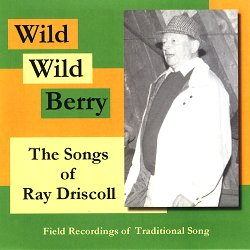 I first encountered Ray Driscoll on the CD A Century of Song (EFDSS CD02, 1998), which features Ray singing Wild, Wild Berry, recorded by Mike Yates in 1989.  Subsequently two further recordings of Ray, made by Gwilym Davies, have been made commercially available: the schoolboy ditty We are the Peckham Boys is on Voice of the People Volume 14 (Topic Records TSCD6641, 1998), and The Doughty Packman appears on The Birds Upon the Tree (Musical Traditions MTCD333, 2004).  Now however Gwilym Davies has provided us with a 32 track CD (representing just under one hour of music) featuring recordings made between 1993 and 2002.

Ray Driscoll was born in 1922, in County Mayo, but moved to London when a boy (following his father, who was posted there with the Irish Lancers), and spent the rest of his life in England as a farmworker in Shropshire; in the Royal Navy during World War II; working as a printer in Fleet Street.  He was living in Dulwich, London, when recorded by Mike Yates and, initially at any rate, by Gwilym Davies.  He returned to Shropshire at some point prior to his death in 2005.

As Gwilym Davies notes: 'In the mid 1990s, it was rare to meet a singer of folk songs who had a large repertoire of songs and who had not been particularly influenced by the folk music revival'.  In this context, Ray Driscoll was quite a find, and this is a very welcome CD release.  On the evidence of these recordings, made when he was in his seventies,

Ray was a strong singer with a clear, pleasant voice and an interesting repertoire.  Here we have often-found traditional songs, such as Banks of Sweet Primroses and Jones's Ale, alongside songs of music hall origin, a selection of folk carols, some locally composed ditties, and a few very rare ballads and songs.  Oh Mariners All, apparently not found in oral tradition since 1908, definitely falls in this latter category (sound clip, left).

So do Sir Patrick Spens, Lovely Joan and The Death of Queen Jane (although I notice that Gwilym Davies also had the good fortune to record a version of this in Devon in 1985).  The title track, Wild, Wild Berry, is also unusual; a reworking of Lord Randall which, like The Death of Queen Jane, Ray learned from Harry Civil, an itinerant Shropshire farmworker. (sound clip, right)

The CD notes tell us Ray's sources for some of the songs: for instance he picked up the tune of Sir Patrick Spens from a Scottish colleague in the 1940s, then found the words in a printed source; Doughty Packman was learned from a London school teacher in the 1930s.  And, more generally, we are told that he learned some songs from his fiddle-playing Irish father.  But I would have liked a lot more background information.  Gwilym Davies will have spent many hours, I'm sure, chatting to Ray, finding out about his past, and the contexts in which he sang and learned songs.  It's a shame not to have more of that presented to us.  If economic considerations ruled out a booklet with more than 4 pages, better use could have been made of the space available on the CD insert.  As it is, the tracklist appears on the back of the CD case, then is unnecessarily duplicated on the last page of the insert.  Similarly, exactly the same photo of Ray Driscoll is printed on the CD front cover and again inside the insert, taking up valuable space.  Finally, the brief liner notes are printed, I would guess, in at least 12 point font: a rather smaller font size would have kept the text legible, while allowing more text to be included.

In some cases we can hazard a guess as to where Ray learned songs.  The two football songs were presumably learned during his boyhood in London and Shropshire.  And it's not unlikely that Ray had personal experience of Hopping Down in Kent (and may well have had personal experience of the unsatisfactory lavatorial facilities, as detailed in the verse which commences 'When you use the khazi', which I've not heard before).

There's some additional details of Ray's life and songs to be found in the Voice of the People CD booklet and in an article by Gwilym Davies, The songs of Ray Driscoll in English Dance & Song, November 1994.  I was particularly interested to know in what context Ray learned and performed the pieces grouped together as Hanwood Carols: namely While Shepherds Watched, How Beautiful Upon the Mountains, and a brief concluding Good Night song.  By consulting these other sources I now know that Hanwood was the village outside Shrewsbury where the Driscoll family moved when their London home was bombed during the Blitz; and that Ray learned a number of songs in the Cock Inn at Hanwood, including those carols.  But what of the Wassail and Souling songs?  Where and when did Ray learn these?  Was he a participant in these rituals?

Perhaps Gwilym will satisfy my desire for more information by publishing additional notes to the web; I'm sure they'd be welcome on this site, for instance.

The CD can be purchased either on line through Paypal to properjob_publications@yahoo.co.uk or by post by sending a cheque payable to G Davies to: Driscoll CD, 39 Buckles Close, Charlton Kings, Cheltenham, GL53 8QT.  The cost is È12 plus È1 postage (È2 postage for overseas).