Songs of the Greek Underworld

The years between the two world wars we tend to think of as the age when a dominant form of popular music, coming out of the USA and based on jazz, suddenly went global, sweeping almost everything before it, aided and abetted in its domination by the new communications explosion of mass produced sound recordings, motion pictures and radio.   There’s a lot of truth in that (check out the series of LPs of worldwide jazz released in the 1980s on the Harlequin label, for some most enjoyable evidence), but it isn’t by any means the whole picture.   Not only did many resilient forms of regional and vernacular musics survive the onslaught (admittedly some, only just), but others were still being born and developing.   One of these - and to my mind, one of the most extraordinary - came of age in the underworld haunts of urban Greece, nurtured in the hands of renegade individualists whose dogged self-sufficiency probably helped ensure that it retained its distinctiveness in an age when more mainstream musicians would have been trying their hands with the increasingly international sounds from black America.   Not that there was anything pure about rembetica; its ingredients came from a number of different sources.   One of the things that probably attracts people like myself to this music is its hybrid nature, the way it mixes elements of east and west, the way it manages to be European and Arab at the same time, yet neither of these - emerging as somehow so much more than the sum of its parts.

Rembetica had been around before the 1930s and it continued develop in the next twenty years and beyond, but it seems to me that this decade - from which the majority of tracks on these two CDs come - was its golden age, 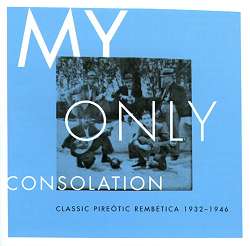 when it was at its most distinctive, and when its greatest exponents were in their prime.   Many, most even, of these are represented on these two discs.   My Only Consolation is the more representative of the core of rembetika, with a very strong selection covering many of the big names.   There are seven tracks featuring Markos Vamvakaris, perhaps the greatest of all the rembetes; his bouzouki playing was outstanding, his rough, growling voice ideal for these songs of low life and narcotic over-indulgence.   The range of Vamvakaris’s music is well covered, from tough guy songs like The Sucker and The Jonah, which evoke a very satisfying mental image of the drinking dens of Pireus, to brilliantly executed instrumental tunes.   Of the beautiful piece Mi Me Pismaton is, the booklet notes have this to say : 'Although the serviko is usually an exuberantly joyful dance, this piece is pervaded by melancholy'.   This apparent paradox is, of course, one of the hallmarks of so many great indigenous dance musics.   In a display of stately precision and startling dexterity, Vamvakaris still somehow seems to convey the deepest feelings in his heart.

Many of the other key figures are here, too.   There’s Hatzichristos - a favourite of mine, with that big, aching voice, which unfortunately we only get to hear on one track, although he also gets an instrumental serviko - and Stratos, whose Minore-manes exemplifies perfectly the fatalism of the rembetes:

Open, you dead, I am knocking
Let me enter and clean up
That place which for ever more
Will be my eternal home

... which turns out to be the preamble to a swaggering dance tune.   Papaioannou, another master of the bouzouki, and another personal favourite, is represented by two consecutive tracks - a thrilling instrumental, and Otan Dho Ta Dhio Sou Matia (When I see your two eyes) a love song, but one that is heavy with despair and intoxication.   Yiorgos Batis, with his tiny instrument, the baglamas, (ideal for hiding about your person), contributes one of the set’s most captivating songs O Batis I Dervis (Batis, the Dervish), harking back (as does the Stratos introductory section, quoted above) to the highly Turkish-influenced 'Cafe Aman' style - a free, almost wild vocalising.

If My Only Consolation offers a good, even definitive (within the confines of a single 22 track CD) selection of classic 1930s rembetica, 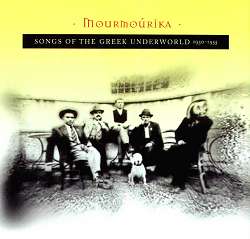 in the hands of the masters, Mourmourika might be seen as somewhat more specialised fare.   The Mourmourika of the title are songs of the mourmourdhes.   This was a term originating in Constantinople, meaning hard-men (the literal translation is grumblers), and these songs seem to represent a thread of rembetika with particular characteristics, many of them harking back to an earlier time - illustrated in the Turkish derivation of the term.   One such characteristic was that many of the songs were, to quote the booklet’s notes: 'made up of couplets from the common stock and improvisations on them'.   Some of these couplets, I suspect, may have been of quite ancient derivation, and may even share a common source with lines that crop up elsewhere in European tradition.   One example that sounds familiar, in shape, if not in exact words, is:

... from Ta Dhisticha Tou Manga (The Dude’s Song) by the rather obscure Spachanis.   Having said that, many of the lyrics cover the usual picaresque ground of the rembetes: gun fights with the police, smoking the argile (hashish pipe), languishing in jail or cursing your fate at the hands of a dark-eyed temptress.

Think of rembetica (indeed, think of Greek music) and the chances are that many people will be thinking of the bouzouki, and rightly so - it features on most tracks on My Only Consolation.   But the guitar was popular, too, often providing a chordal rhythm accompaniment but also, in the right hands, a lead instrument that was able to express the spirit of the music almost as effectively as the bouzouki.   The guitar is featured very strongly on Mourmourika, most impressively in the hands of Spyros Peristeris and the wonderful Yeorgios Katsaros.   The former plays a fast single string lead style, creating beautiful, expressive vibrato effects with the left hand fingers, and trills on the right.   He is also credited with bouzouki on a few tracks, and the photograph of him in the booklet shows him with a mandolin, so he was evidently as versatile as he was skilled.   His playing behind the vocals of Zacharias Kasimatis on O Mangas Tou Votaniko is especially fine.   Katsaros’s finger-picking style makes more use of harmonies, and seems more European in orientation.   He only has one appearance here (from quite a late session, in New York, 1947) but it’s a beauty.   Actually, though, to single out tracks is pointless - the music here is of such consistently exceptional quality.

The two CDs are beautifully packaged, especially Moumourika, with its wonderfully atmospheric cover photograph, and both are well-illustrated and include lyrics transcribed both in Greek and English, and discographical data.   As already indicated, My Only Consolation would be a good place to start - a basic collection of core material from what is probably rembetica’s most creative and distinctive period.   But, in fact, the other CD might be the more accessible to a newcomer - great tunes, terrific playing, captivating subject matter.   Either way, these are two stunning anthologies - among the best I’ve ever come across of this music.