Rum Scum Scoosh!
songs and stories of an Aberdeen childhood 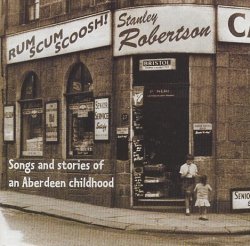 When I first got involved with folk songs, I wasn't really sure what I was looking for.  I knew what I didn't want; I didn't want to hear any schoolmarmy voices singing the likes of:

In Scarlet Town where I was born.
There was a fair maid dwelling,
Made every youth cry, "Well-a-day".
Her name was Barbara Allen.

"Whatever happens", I can remember saying to myself, "I will never want to sing Barbara Allen."  That opinion lasted until the opening concert of the TMSA festival in Kinross in 1970.  I watched as a young red-haired man was introduced.  He looked at the audience with his serious eyes and started singing:

I was utterly captivated by the power, timelessness and majesty of the expressive singing.  I knew by the time that he had finished the first verse that I wanted to learn that version and that here was an utterly compelling singer.  This was the first time that I heard Stanley Robertson.  If I had known that I was going to be listening to the nephew of Jeannie Robertson; the cousin of Lizzie Higgins, my expectations might have been higher, but I don't think I knew that until after I had heard him.

I have the feeling that my great enthusiasm for his singing was not that widely shared and I can remember arguing his case to people, even members of the School of Scottish Studies, who did not share my opinion that here was one of Scotland's finest.  As it happens, Stanley seems to have been more in demand over the years as the remarkable storyteller that he has always been, rather than as the great singer that I regard him as.

Here's what the Aberdeen University Elphinstone Institute, who have brought out this double album say about him on their website www.abdn.ac.uk/elphinstone/staff/robertson.shtml :

Stanley Robertson, one of Scotland's leading storytellers and ballad singers, was the Keyworker for the Heritage Lottery funded 'Oral and Cultural Traditions of Scottish Travellers' project from April 2002 until April 2005.  As an acknowledged expert and member of the Traveller community, Stanley has documented his own lore and that of other members of this group, and promoted the cultural traditions of Scottish Travellers among young people, in schools and community groups, including young Travellers.  Stanley is a nephew of the late Jeannie Robertson (1908-1975), acknowledged as the greatest singer of ballads ever recorded in Scotland.  His knowledge of ballads and lore equals that of his aunt and he is also a renowned singer, storyteller and writer.

So Stanley, who left school at fourteen without any formal qualifications, ended his working days on the staff of his local university; life is full of funny twists and turns.

The material on these two CDs reflect the work that Stanley was doing at the Elphinstone Institute in working extensively with children.  As someone whose boyhood was spent in Edinburgh, living with a grandmother from Aberdeen, much of this material is familiar to me and brings many strong nostalgic feelings.  Frankly, I cannot remember where I first heard many of these items.  Some were from my mother, more from my grandmother, a better singer with a better memory, some were learned in the streets and playgrounds of Edinburgh and Leith, but as a grown-up I can remember swapping, comparing and learning items with Isabel Sutherland as we worked on shows to present in folk clubs and schools - or just for fun.  That all the versions that I knew are slightly or very different from the ones here just adds to the enjoyment.

The categories that exist on CD1 are of Stanley's making and to a certain extent they are arbitrary.  He has two in a category called 'parodies' but in truth there are many parodies of words and many borrowings of tunes throughout.  It would be interesting to be able to trace all the sources of tunes; there are pipe tunes, folk song tunes, early film songs, pop songs - even the national anthem (sound clip).  All are grist to the mill of the creative, adaptive schoolyard bard.  The most useful aspect of Stanley's categories is where he divides them up by how they were used, skipping, two-balls, counting out to see who will be 'up' at the start of a game, prelude to chasing, advance and retire games, identifying the farter and so on.  Once again these are examples of the all-important function giving vibrancy to a folk-song tradition.  Stanley's versions seem to come, the main from that period from the 1920s to the 1950s when this children's tradition was probably at its height in the middle years between the introduction of universal education and the coming of mass ubiquitous forms of music and entertainment that would swamp out this homemade, hand-me-down, disrespectful, vibrant stuff. 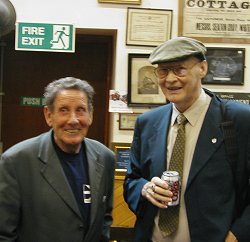 Some songs, such as the opening track, must have originated in Aberdeen, whilst others are those that drifted in their location from town to town like the version here of I'll Tell Me Ma, often set in Belfast which has a verse here that says:

She is handsome, she is pretty,
She is Queen o' the Silver City,
She has lovers, one, two, three,
Come and tell me who they be.

Among the most interesting to me are the couple that are very specific to this north-east area as they are in traveller cant (sound clip) though one wonders with both of these how much they were specific to children as they both deal with the age-old traveller concern of getting the best out of the gadgies.

There are two others that feel as though they are somewhat out of place here.  These are the Higgins/Robertson family version of The Mermaid, sung here as Three Times Around, and their version of The Cruel Mother sung as She 's Leaned Her Back (sound clip).  Stanley sings these two here in a lighter and faster manner than the way his cousin Lizzie used to sing them, but neither of these songs have that cheeky irreverence and pawky humour that is associated with playground songs.  They deal in an adult manner with adult concerns.  The fact remains, however, that they are the most memorable and outstanding performances on the CD.  They serve as a reminder that it is as a ballad singer that Stanley really shines and it would serve him and us best to have more of his outstanding interpretations of ballads commercially available.

Having expressed my admiration for Stanley's singing, it must be admitted that he is not always at his very best here.  There are times when he drifts from his starting key and other times when he wobbles off tune.  At other times he has not pitched the song to his best advantage, causing him to sound as though he is stretching for a high note, and in other places causing a grumble on a low note.  We all know that Ian Russell, who recorded these songs, as a wonderful and inspiring song collector.  What Stanley might have needed here was a critical friend to say, "I think you could have managed that one a bit better if you had pitched it lower" and so on.  Where Stanley does get it right, it could scarcely be bettered.

No such criticism could be levelled CD2 and the stories.  All the best storytellers that I have ever heard are Scots travellers.  I would nominate Betsy Whyte, Alex Stewart and his son John and Stanley Robertson as the most compelling storytellers I ever heard live.  Each of these four had their own different, special qualities, but it is Stanley who has that ability to transport the listener to an other- worldly timeless zone, by the magnificent pacing and timing of the stories.

The involving way he starts each story is an art in itself.  In recent years he has told the majority of the stories heard here for his children's sessions at Whitby Folk Festival and I have felt compelled to attend these.  Hearing them again on disc brings back the memory of very special performances to an excited and exhilarated bunch of kids, and none do this better than the title track of this venture (sound clip).

The booklet has the words of all the songs and a synopsis of all the stories with their sources and references where appropriate and a few photos.  A worthy companion to this release would be an equally pleasing recent release, Chokit on a Tattie - Children's Songs & Rhymes which is no.22 in the Scottish Tradition series on Greentrax (CDTRAX 9022).  This is a compilation from the archives of the School of Scottish Studies.  It gives brief but lovely examples of the singing of Lucy Stewart and of Jeannie Robertson.