Davy Spillane is a well known uilleann piper from his time with The Moving Hearts, Riverdance and his own band.  Most of his recordings have not been particularly traditional.  On this CD with fiddler Kevin Glackin, he has returned to his traditional roots with a selection of piping and session standards. 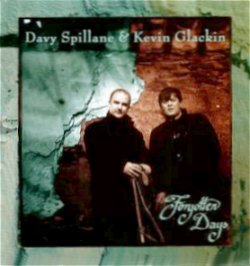 Most of the playing on this CD is duets with one solo from each player.  Using only the drones and regulators for accompaniment, this is a stripped down display of Spillane playing traditional dance music, with none of the usual frills and supporting cast that have surrounded him for the last 15 or more years.

Kevin Glackin comes from a famous Dublin musical family with roots in Donegal.  He recorded an LP of duets with brother Seamus in the late 1980s and since then has appeared on a number of other recordings.  Kevin Glackin's commitment to the tradition has remained steady throughout his recorded output and he has become recognised by fellow musicians as a fine player.  His command of the instrument and the idiom are very well demonstrated in his solo rendition of Lord Gordon's Reel which has been considered a real test piece for fiddlers since Michael Coleman popularised it on a 1930s' 78 rpm record.

If you've only listened to the odd sample of Spillane's folk/jazz/rock hybrid music, this CD gives a chance to ask whether at the age of 40 he can provide the rhythm and excitement that were suggested by his earliest recordings on the Pipers Rock LP back in 1979.  The first impressions of this CD are that he is surprisingly restrained, almost understated in his execution.  It was a relief to find that only on one tune, The Lark in the Morning, does he resort to the slides and note bending that seemed to characterise his work on Riverdance and his own band.  For the rest, his fingerwork is very neat and well articulated and the whole sound is set off by the punch of Glackin's fiddle.  Spillane was always regarded as an open style piper, but there are no real piping tricks on display here, although his regulator work is exemplary.

Maybe we expected too much, but the choice of tunes suggested a chance for references to Keenan and the Dorans who are often quoted as key influences on Davy's piping style.  The Steampacket, The Fermoy Lasses and The Pigeon on the Gate are well known for the personalised settings that these famous open style pipers have put into the popular repertoire.  None of these references are hinted at in the settings of the tunes on this recording.  Davy Spillane seems to be trying to avoid using slides and bends, but he doesn't appear to have much to replace them, unlike contemporaries such as Robbie Hannan or Mick O'Brien.

The discipline of playing in tight duet might limit a player's freedom, but recent pairings such as Paddy Glackin playing with either Paddy Keenan or Robbie Hannan, and Sean Keane and Liam O'Flynn suggest that there is plenty of scope to surprise and excite the listener.  Despite the best efforts of Kevin Glackin, this CD is not going to join the lists as an all time classic.  Every time something grabs your attention it's Glackin putting in some neat triplets or double stopping to emphasise the rhythm.  There are some very popular session tunes on display all played in neat settings such as Lucy Campbell, The Abbey Reel and Trim the Velvet but the only time the duet really sparks is on the hornpipe selection where Spillane plays the low whistle.  Take away the fiddle and this would be a fairly bland offering.

The last track on the CD is Davy Spillane's solo.  He plays the slow air Port na bPucai which certainly shows his skill as a pipe maker and tuner.  His pipes are in superlative tune and balance as he fills out the haunting melody on the regulators.  This tune, originally collected in the Blaskets, owes a lot to the hump backed whales whose songs the local fishermen attributed to the fairies.  This is a good choice for Spillane as it fits his style, relying on simple ornamentation and a good command of the chanter although once or twice his variations drift into the "mood music" feel of some of his own compositions.

Recorded in Clare and produced on Spillane's own label, this CD has no information about the tunes or the settings, just a brief acknowledgement from the lads to the older musicians who shared the music with them around Dublin in the mid '70s.  Even the track listing has a small error, The Abbey Reel is the un-credited third reel on track 4 and not the third reel on track 5 which is actually Jenny's Wedding.

If you've got 15 quid to spare, go out and buy this.  While it is no show stopper, it is a good record and well worth a listen.  We were just left thinking that it might have been a lot better.