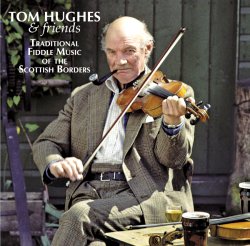 This set (CD and book - of which the CD is also available separately) was actually issued in 2015, so it may make more sense to regard what follows as an MT 'Appreciation', but either way this exceptional venture deserves to be praised to MT's rafters, however belatedly.

Tom Hughes & friends and the book which accompanies it represent an expansion of the LP 'Tom Hughes and his border fiddle', which Springthyme released in 1981 (SPR 1005).  Even in that form - with a mere 25 tunes and an insert containing transcriptions of 24 of them (and much more besides) - it represented an exceptional record of a traditional musician and his music.

What we are offered on the new CD is 52 tunes which were recorded between 1978 and 1980, performed by Tom (1908 - 1986) solo, duetting with Wattie Robson (the other of the 'two fiddlers' in the track list above) or with the assorted friends of the title (who include Bob Hobkirk), with some of those tunes performed both solo and ensemble.  To quote Peter Shepheard, to whom we are indebted for the both CD and book - and indeed the original project which ultimately produced them: 'Tom learned his music by ear within the family circle and Tom's style and many of his tunes were learnt from family tradition.  Although Tom's fiddle style includes many characteristic Scottish elements, it is quite different from any mainstream fiddle style such as that of Scotland's North East or that of the West Highlands'.

Tom's playing is marked by superb control (evidence, perhaps of constant 'rehearsal', that is to say playing for his own enjoyment) and a delicate touch, coupled with the tasteful exuberance which is the hallmark of the traditional musician, as with the Marquis of Lorne's Hornpipe.  That exuberance is amplified on the tracks recorded with Tom's friends: here's an example: The Rock and the Wee Puckle Tow, a far cry from the all-too-frequent spectacle of massed revival virtuosi beaming shamelessly with self-regard on the helter-skelter of self-indulgence.

And while those Scottish elements which Peter Shepheard refers to are abundantly evident - particularly in the Scottish tune-types - Tom's playing (and repertoire) has resonances not only beyond the Tweed but beyond the sea.  And if immediate comparisons can be ventured with Northumberland's Ned Pearson, a fiddler of similar proficiency who also left a number of recordings to posterity (though not, unfortunately, on the same scale or - bizarrely - available together on a single CD) and had a similar deft touch, there are some aspects of his playing and his repertoire which remind me of Australian fiddlers: his waltzes, for example, seem to be served up with the same spirit as those of Tasmania's Eileen McCoy: their taste in tunes seem also to have coincided: for example she played a version of the tune which Tom called Auld Graden Kirn for the Spanish Waltz - Auld Graden Kirn.

Perhaps it is the spirit of the music played by the fiddlers in the Borders and Northumberland which unites them, rather than any common style, and perhaps it is their very individualism which - to some extent - IS the style, much as it is individualism which united other fiddlers south of the border and in the antipodes, both jointly and severally.  What most of them have in common is the respect they show for every note of a tune: each note is approached with equal attention rather than as merely an indicator of finite duration - as they tend to be played when read from printed music - all with an equally important role to play in the development of the melody, or rather the rhythm (those being two ways of looking at the same thing), within the parameters imposed by the nature - and purpose - of the repertoire.  It is this which gives the music the 'bounce' which was so highly regarded by traditional musicians.  Perhaps we should regard this as a feature of Sassenach (English and Lowland Scots) fiddling, one which was carried to Australia by successive waves of pom migrants, or perhaps it had once been a more widespread way of playing before the advent of the sundry codifications of style (and repertoire) which were increasingly apparent from the latter part of the 19th century onwards - except, apparently, among Sassenachs on either side of the border.

As regards the repertoire it is a mixture of (once) modern compositions and inherited tunes which aren't found elsewhere, 'universal' tunes (Harvest Home, 'Tam's Untitled Hornpipe'), tunes of Scots origin which everyone seems once to have known (Flouers o' Edinburgh, Braes o' Mar, Roxburgh Castle) tunes for social dances which were once widely known in and beyond these islands (Pop Goes the Weasel, The Triumph, The Varsovienne - known to Tom as Cock Yer Leg Up, a name which is also found elsewhere in the English-speaking world), and tunes shared in particular with Northumbrian musicians (Stool of Repentance, Rock and a Wee Puckle Tow - though whatever its origins the Morpeth Rant seems always to have been widely known further south).  Of particular interest are the tunes (notably hornpipes) in Tom Hughes' repertoire, whether acquired or inherited by him, which seem also to have held some appeal for musicians in East Anglia until relatively modern times (Dundee Hornpipe, 'Galloway' Hornpipe, Marquis of Lorne's Hornpipe, Millicent's Favourite): the appeal and consequent adoption of such tunes in East Anglia perhaps supports the suggestion of shared parameters among traditional musicians in the borders and further south.

On its own the CD makes an indispensable addition to the active collection of anyone pretending to an interest in or liking for traditional fiddling of any kind.  The accompanying book, which is subtitled A player's guide to regional techniques, playing style, repertoire and dances, contains detailed transcriptions of sixty tunes (some of which do not appear on the CD), and a detailed account of the project and its execution, with details of Tom's own musical background and musical life in the Borders in general in and before his lifetime, as well as details of the process and context of the recordings and the methodology employed for the transcriptions.  It is indispensable reading for any fiddler or would-be fiddler.

Further details of both the book and the CD, including track notes and sound files, samples of transcriptions and purchasing details can be found at http://www.springthyme.co.uk/1044/.