This record is the first of the Rounder/Lomax Italian Treasury issues and, as discussed in the Sampler review, it is actually a new record rather than just a reissue of an LP from the 1950s.  This is doubly pleasing because it means that we should get full value for our money and new booklet notes, actually written in the late 1990s and, it is to be hoped, up to date in terms of information and scholarship. 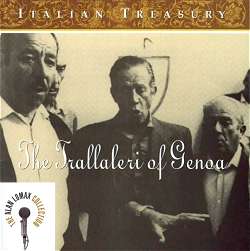 Lomax and Diego Carpitella recorded only two singing sessions in Genova, both on the same day, it would appear - but knowing the way the trallaleri love to sing, I'm extremely surprised that they only recorded 15 songs during these two meetings.  Given that Lomax said he was "blown away" by his first encounter with trallalero and described it as "one of the most significant" of all his researches, it would be astonishing if didn't try to record more of it.  It is of course possible that, in the bad years of the 1950s, he was only able to find two squadre (teams) active - but we are not told.

In any event, as a consequence, this record comprises only 14 songs (the one on the Italian Sampler does not reappear here), making some 38 minutes of music - or, to put it another way, it is a half-empty CD.  In value for money terms this may seem a pretty poor deal, but I freely admit that I'd pay the full price if it only contained track 1 - the sublime La Partenza.

A bit of background to the trallalero style would be appropriate at this point, and I hope readers will forgive me if I repeat a passage from my review of a modern Squadra which appeared recently in these pages.

Aside from the mandolin music of Napoli, it seems to be the Genovese Trallalero tradition which most comes to mind (among the people I know), when Italian music is mentioned.  This is particularly astonishing when one realises that most people have only ever heard one song by one group - the above mentioned La Partenza

sung by an unnamed 'group of longshoremen from Genoa', recorded by Diego Carpitella and Alan Lomax in 1954.  (The song is one long piece, with no separate verses, so a short sound clip from the beginning will have to suffice for those of you who've not heard it before).  This single recording appeared on the Columbia World Series LPs and was featured in a radio program Bert Lloyd made in the early 1970s(?).  Nonetheless, the aural experience is so extraordinary that no one who heard it seems ever to have forgotten it.

The trallalero tradition is unique in that the usual line-up of tenor, baritone and bass voices is augmented (as you will have just heard) by a male contralto and a man imitating a guitar!  It is also unusual in that comprises a traditional repertoire of only around sixty songs, and that it flourished in just one area of one fairly small city, Genova, in Italy's smallest regione, Liguria.  The history of the genre is interesting.

Liguria is an odd place geographically, composed almost entirely of the southern side of a range of mountains.  The Appennines, the 'backbone of Italy', swing to the west where they meet the continental landmass and join up with the Maritime Alps, forming the northern coastline of the Ligurian Sea.  Their feet are in the water except for a few places where, presumably, glacial erosion has created a narrow strip of coastal land.  The east-to-west centre-line of the Ligurian Appennines forms the border between Liguria and the neighbouring regione of Piemonte to the north.  In the few places where the coastal plain is wide enough there are towns, and Genova, right in the middle, is the largest and most important.  The mountain valleys to the north are scattered with small towns and villages - and it is here that the beginnings of the trallalero can be found.

Group harmony singing can be found all over the world and the Ligurian mountain villages are no exception - but the normal form was for a 'first' and 'second' voice (often a tenor and a baritone) to carry the song over a bass accompaniment or drone.  In a few areas, a vocal 'guitar' part was added to the accompaniment.  A broad repertoire of such songs developed over a long period.  Liguria is a poor area for most sorts of agriculture and many villages operated at near subsistence levels whenever the circumstances were less than perfect.  Having a city like Genova (Zena in the local dialect), rich from trade and commerce from the 11th century through to fairly recent times, acted as a magnet, as all powerful cities do, to the more adventuresome dwellers in the hinterland, and such people flocked there in search of fame and fortune ... bringing their songs with them.  For reasons which it would be impossible to fully explain, the polyphonic singing style of the mountain villages found a particular place among the gangs of longshoremen, stevedores and participants in the various metal-working trades which supported the industry of the port.  The male contralto part may well have been borrowed from the castrati who formerly sang in the church choirs of the city.

The practice of singing in a squadra di canto probably reached its height in the early years of this century, when the bars of Genova's waterfront played host to informal singing on a very regular basis, and formal competitions between the various groups were great social occasions.  In the 1920s and '30s it is said that there were over a hundred squadre (each from distinct professions as diverse as the bakers and the male nurses) all active in these competitions.  Inevitably, by the 1950s such activity had dwindled considerably - not only for the reasons which led to the decline of traditional music throughout the developed world, but also because of the peculiar difficulties in presenting and maintaining the trallalero tradition.

The magic number for trallalero is said to be nine - that is: tenor, contralto, baritone, chitarra ('vocal guitar') and five basses.  Many groups were much bigger.  Each also required a conductor / leader / music arranger / organiser to keep such a show on the road and up to competition standard.  Similarly, regular practices were needed both to maintain standards and train up new singers.  It's hardly surprising that trallalero suffered badly in the black years of the mid-20th century - but enough of it struggled on to provide the renaissance of the late-1960s with a repertoire and a stylistic model.

The booklet is fairly full and, aside from the standard page1 Introduction to the Treasury, doesn't waste any time telling us how wonderful the two ethnomusicologists were.  The Series editor, researcher and compiler, Goffredo Plastino, gives us a couple of pages of ethnographic and musicological overview of the tradition before handing over to Lomax for four pages of Historical Notes and Cantometrical theorising on why the trallaleri sing in the way they do.  Whether this is the complete bollocks that some people maintain I am not in a position to judge - but it's certainly interesting bollocks if it is.  Then Edward Neill (the authority on the subject and the man widely credited with having rescued trallalero and nursed it back to life in the '60s and '70s) supplies four more pages of History and Origins.  Inevitably, when three different writers are asked for an essay on the same subject there's bound to be some repetition involved, but their difference of approach saves the day for the most part. 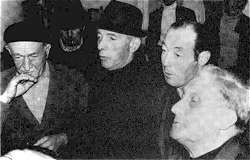 Neill then supplies notes on each of the tracks, though these are not as detailed as Plastino's on the Calabrian disc.  He also supplies some nice photos - only one of which looks old enough to have been either of the groups recorded in 1954, but we never learn whether they are or not.  The one shown here is titled Canterini della Val Bisagno, and the tenore (on the right) is named as Wigi Isolabella.  The man in the beret (left) is the chitarra.

Sadly, we hear nothing of these singers in the booklet.  From aural evidence I would say that the 'male chorus' recorded in the Ritrovo dei Facchini on October 15th is not the same one which sang in Bar Tungi on the same day.  We are not even told whether either of the 'male choruses' were active squadre or merely a group of singers got together for the occasion.  Given the quality of the singing, the latter would seem unlikely.

The music, surprisingly, is just a little disappointing.  After the splendour that is La Partenza, nothing else quite lives up to the paradigm, and one might argue that the programming is debatable and that La Partenza should have been placed last, not first, on the disc.  This track has to be seen as the crowning glory of the genre and not as a typical example.  It also makes me realise that many of the modern squadre I have heard are, perhaps, rather better than I gave them credit for.

But there is a great deal more lovely singing to be heard, including the fascinating Trallalero Parts - where each voice comes in separately and the various parts of the harmony are built up as the track progresses - Il Cacciatore (The Hunter- sound clip) and U Ruscignö (The Nightingale).  As a sort of bonus, we get Glen Miller's In the Mood as a finalé.

I would recommend The Trallaleri of Genoa to absolutely everyone, even at 38 minutes!