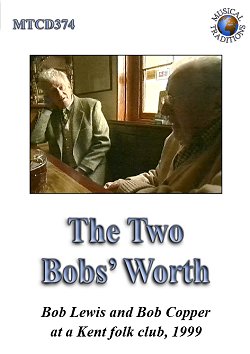 With the 'folk scene' undergoing its perennial process of redefining itself, the somewhat surprising emergence of this publication is not only timely but a sheer joy to behold.  Hewn from the same Sussex chalk (albeit East and West) Bobs, Copper and Lewis, in this live recording made at Nellie's Folk Club in Tonbridge in 1999 display all the craft and intimacy of traditional singing at its best and in context.  It is timely because these recordings are both a snapshot and a reminder of where this thing we call the 'folk scene' essentially came from.

The two Bobs were old friends, sharing many a platform and bar-room singing their songs, but never consciously as a duo, as they are here.  As a singer, Bob Copper, who passed away in 2004 at the age of eighty-nine, is most commonly identified as part of Copper Family from Rottingdean in the east, or as a duo with his cousin Ron, although he would do the occasional solo spot.  He actually recorded one solo LP for Topic Records in 1977, Sweet Rose in June, but his obvious talents as a soloist were perhaps underestimated, most likely by himself, and therefore somewhat submerged.  On The Two Bobs' Worth, Bob Copper, accompanying himself on English concertina when singing all but two of the songs, is a joy to listen to.  He is certainly in good voice for an 85-year-old, as well as being in respectable command of his instrument, which never gets in the way of the song.  As always, the enjoyment is as much about what he says about the songs and the singers from whom he collected them as it is in the performance.

Bob Lewis, from Heyshott in the west, is of a younger generation and is still singing.  He honed his style in the company of traditional singers lauded on the local Sussex pub circuit back in the 1960s, most notably George Belton, George Spicer, Cyril Phillips, and of course the Coppers, absorbing their ways and stories along the way.  The result of this is undoubtedly one of the purest of male southern English singing voices and a repertoire that includes some of the rarest items ever recorded, such as his renditions of Good Morrow Mistress Bright and The Cobbler.

Bob Copper's repertoire here is essentially taken from his family and songs collected whilst living in Hampshire and working for the BBC's collecting project in the 1950s.  There are no real surprises, apart from his amusing addendum, I Know where Those Blackbirds Be, to Bob Lewis's Three Old Crows.  Bob Lewis, on the other hand, adds to his store of songs previously recorded and mostly published by Veteran.  However, it is when the two singers seamlessly merge into a duo on three songs from the Copper Family canon that we hear the communal aspect of the event really come alive.  With Lewis leading and Copper taking the harmony, it is as if they had been doing this together for years.  The warmth of the occasion simply adds to their performance.

The recording made by Andrew King is of very good quality given the live context, and the accompanying booklet, with detailed biographies of the singers contributed by Jon Dudley and Vic Smith, provides transcriptions and concise and useful notes on the songs.  In terms of the design and layout of the publication, it couldn't be more basic.  As to the high quality of its content, there can be no question.