When Adam Was In Paradise
Traditional Songs of Love and Courtship 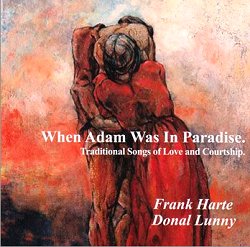 Well, this was a complete surprise when it popped though the letterbox together with a handwritten message from Frank's daughter, Orla.  Not living in Ireland myself, I wasn't aware that this (or something very like it) had been Frank's next intended project, nor that his death in 2005 had nipped it in the bud before much more than the selection of songs had been completed.  Nor was I aware that Orla, Dónal Lunny and Phil Callery had been working on it for the past few months.

What must have made their job far easier was the fact that Frank gave a concert in 2004 on the very subject of 'songs of love and courtship', and that it was recorded.  So a substantial part of this CD comprises recordings from that concert, but finding recordings of the rest of Frank's list proved quite difficult because - as the booklet tells us - 'he did not often sing love songs in a setting where high quality recordings were being made'.  Thus, whilst some 13 of these 20 tracks are dated 2004, and so presumably from that concert, others come from as far back in time as 1984.

The introduction and comments about the songs are all taken from Frank's own writings, though they are (unsurprisingly) fairly brief, and information on who he learned them from is pretty scanty.  What a shame he wasn't around to do a more complete job on them.  Anyway, what about the songs and the singing?

First, it should be noted that nothing here is a studio recording, but the 2004 tracks are of exemplary technical quality - as indeed are most of the others.  It's only very rarely that one thinks "Ah yes, this was one that they really had to hunt for."  Far more important is the quality of the singing, which is almost always splendid, and of the performances - which are a real joy!.  Because they are all (I think) live performances before an audience, and I don't think that this was the case with any other of his records.  You can clearly hear one of the (many) reasons that Frank was so loved - he communicated!

As you can see from the above track list, there can't be too many Harte love songs missing from this CD, and most are well enough known to MT readers not to need a track-by-track appraisal.  But a few comments are appropriate, I think.  Track 6, Spanish Lady is the one with the 'counting down' chorus, and Frank might have been interested to know that George Townshend (MTCD304-5) and at least 5 other English singers also had it in much the same form.  Indeed, of Roud's 137 instances of this song, only one is from Ireland.  Then, I found track 12, The Lambeg Drummer, a modern song by Mickey McConnell, to be completely new to me - and very effecting.  Lastly, the final track, Sweet Sorrow In The Wind, was recorded at the Góilín Club when West Virginia singer, Molly Andrews, was that night's guest.  She rips into the chorus in true Appalachian mountain harmony - fabulous!

Which brings me to the only thing I was slightly unhappy about with this absolutely delightful CD - although you can hear the audience ambience throughout, it's not 'til track 12 that we get applause at the end of the song ... and so it comes as something of an aural surprise.  Personally, I would have preferred applause for every song - or none.