For me one of the chief attractions of the English Gypsy style of delivering traditional song is that it offers a sort of aural time-warp across the centuries.  It's a by-product of the Traveller respect for the old ways and traditional values.  They sing it as they learned it, so you get a continuity of fundamental style going back through generations, even allowing for the oral/aural process introducing involuntary evolution as the 'chinese whispers' kick in - necessitated by having to carry it all in your head (after all, if you can't read or write then you can't check it out afterwards in a book).

Of course this evolution also gets coloured over time by techniques reflecting a love of drama and story-telling, to hold the interest of the listener with pauses or extended notes, with breaks in the rhythm, unexpected curtailments and even changes of key.  These are sometimes wrongly interpreted as memory lapses or lack of ability by the uninitiated.  In fact it's more likely to be due to some phrase or piece of melody has been misheard maybe five generations back but it remains defiantly sung 'because that's the way that so-and-so sang it'.

As I write this I recall last year being at a pub session at the Appleby Horse Fair where one of the Welch family was delivering a sentimental old song at full throttle, while his five-year-old son sat at his feet watching him intently and mouthing the words along with him - in ten years time he'll be doing it exactly the same himself.

This CD has its finger right on the pulse of English Gypsy contribution to the preservation of traditional singing.  I can vouch for its authenticity, having participated in many gatherings in wagons and trailers and around campfires with English Romany families in the north. 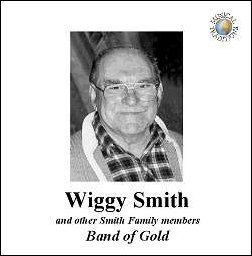 You can justifiably be confident that you are listening English rural folk song in forms and style that its myriad unknown and unrecorded practitioners from the eighteenth to the twentieth centuries would immediately find familiar and recognisable.

I believe that this CD is a superb contribution to the national sound archives and one that every serious student of English Traditional song should have in their collection.

Authenticity aside, it is a unique package with many different facets.

It contains a staggering 33 tracks (value for money by any standard), supported by a 24-page booklet of background information, lyrics and comments; all of it helpful, knowledgeable, well-researched and well-presented.

You have three representatives of the Smith family recorded at various times over a span of 30-plus years with Wiggy as the main singer, but uncles Denny and Jabez (aka Biggun) also making wonderful contributions from the early recordings of the '60s ...  and what superb voices; as resonant and tuneful as antique cellos.

You have vocal technique, pace and phrasing to die for, all inherited from preceding generations, protected by the fierce respect among travellers for doing it the 'proper way'.  You have all the drama of the big ballads done with the classic English Gypsy style and pace.

And as a cheerful little encore at the end we hear Wiggy's granddaughters singing a kids' playground song (yet somehow derived straight from antique folk custom) from '90s Cheltenham.

The producers have very wisely mixed the selection so as to give a balanced end-to-end performance, to relieve some of the drama of the ballad or the sentiment of the song with a bit of pub humour.  Nor have they excluded the modern items from the collection, for any English Gypsy gathering you will hear sentimental pop classics from the fifties and country music favourites, depending on the whim of the singer.  The end effect is like being at a great Romany session for the evening.  Try it for yourself.  Get a stick fire lit (avoid elder or willow) and get a few of you sat round it, a few drinks down and some sausages sizzling, and get the CD going.

This is for the lover of song, sung in authentic style, no frills, no instrumental accompaniment, no artifice - just genuine.  It's the best compilation of its kind I have ever heard.  I can return to it again and again and hear new delights.  It's that link with the past that gets me.  The old tradition is faithfully reproduced, and now preserved forever.

Congratulations to Musical Traditions for one of the most significant contributions to recorded traditional song of the last fifty years.