Voice of the People - Volume 8 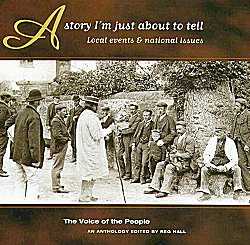 This is the second record in the series for me to review and, if anything, it's more enjoyable than the first (Volume 2).  It may not be that it's intrinsically better, but rather that it contains more material which I don't already have in my collection - so it's a fresh or even first-time listen for me.

All these volumes share the same introductory essay from Reg Hall, which is followed by another on the theme of the particular volume.  Some of these are quite short and uninformative, but this one runs to almost six and a half pages and contains a lot of interesting information and ideas.  It is only regarding the first of these ideas that I find myself in some disagreement with Reg.  Discussing the nature of the songs included, he says that 'songs with a political message usually bear the romantic, literary stamp of the nationalist poet', and goes on to describe them as 'the exception rather than the rule', and of their singers - 'their artistry transcends their unlikely material'.  He indicates that these pejorative comments only apply to three songs - Boulavogue, Bold Fenian Men and Skibbereen, but my feeling is that almost all the songs featured here could be characterised as 'literary' and/or 'romantic' and many as 'political' too.  Reg's prejudices are showing here - no bad thing, in my opinion - but it does rather fly in the face of his intention, declared in the Introduction, to ' ... shift the emphasis away from the values of the folk-song collectors and to present traditional music in its own right, reflecting its history, social contexts and the values of its practitioners'.

As the title implies, all the songs deal with local events or national issues - the better ones often contriving to do both simultaneously - while the tunes commemorate them.  There are only three music tracks, but these seem to merit their inclusion more than those in volume 2, which had only their nautical titles to justify their presence.  Lucy Farr's playing of The Glen of Aherlow embodies almost everything I love about fiddle music - and country music in general - lovely stuff. 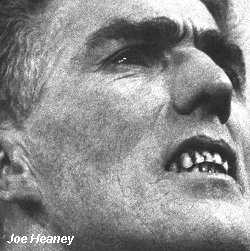 The anglo-concertinas of Bernard O'Sullivan and Tommy McMahon are new to me (due to a reluctance on my part to put anything more into the coffers of the Free Reed company), and they delight with a version of the set dance tune Bonaparte's Retreat.  Having spent years coming to grips with Jimmy Power's version of this strange and complex tune, I shall have to curb my natural desire to listen to this track too often!

Most of the songs deal with two issues: the struggles of the Irish with their oppressors, and the figure which loomed so large for many oppressed people in all of these islands, Napoleon Bonaparte.  In the former category, Joe Heaney's Wife of the Bold Tenant Farmer

and Sarah Makem's Wind that Shakes the Barley are justly famous.  Less well-known will be Freddy McKay's Skibbereen (sound clip), though it appears on the MT cassette 'Freddy McKay: Live' - see our Records page. 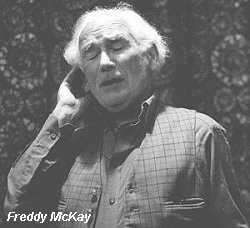 Freddy was best known as the purveyor of humorous monologues, but he could certainly sing serious songs with great passion, and I well remember being moved to tears by his Three Flowers years ago in an Islington club.  His Skibbereen is its equal on the 'movement' front, most probably because it is 'romantic and literary' - but also because it's damned well sung.  Margaret Barry's Bold Fenian Men

displays the 'artistry which transcends' the admittedly romantic material, and I would happily buy this record for the third line of the fourth verse alone (sound clip).  Tears are flowing again.

There's a whole slew of Napoleon songs here, and I know that some Irish readers and listeners will be surprised to hear that the English have a good number of them,

though only one appears on this CD - the ubiquitous Bonny Bunch of Roses, beautifully sung by the great Cyril Poacher (sound clip).  It should not be forgotten that the English masses suffered many of the same oppressive measures as those meted out to their foreign counterparts, particularly after the Revolutionary Wars.  Indeed, it has been said that British governments rarely used repressive measures abroad which had not first been tested out on their own underclass.  The notional possibility of a Napoleonic salvation seemed as welcome to many of them as it did elsewhere.

Other songs in this genre are: A Broadside (Bob Hart), The Young Horseman (Michael Howley), A Grand Conversation on Napoleon (Tom Costello) and Bloody Waterloo (Willie Scott). 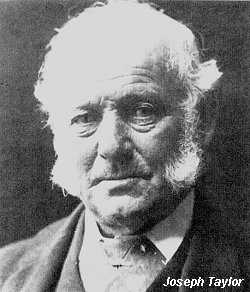 All are excellent, and I think I like Michael Howley's Young Horseman best - it's new to me, and concentrates on the love-story part of Bonny Light Horseman,

dismissing the famous battle to a very secondary importance with the line "He planted his cannon, for some victory to gain" (sound clip).

Few inclusions could be described as relating wholly to local events, but two which do are the excellent May Bradley's Calvery - not, as might be supposed, an Easter song

but McCaffery with the name changed - and Joseph Taylor's Creeping Jane (sound clip).  Without any slur upon Bill Leader, who produced the vinyl album of Taylor's 1908 cylinder recordings, or Martin Carthy, who has sung the song all over the country for many years - this performance is electrifying: a revelation!  Beyond the technological miracle which allows us to hear Joseph Taylor with such clarity some ninety years after he was recorded, is the joy of being able to hear such a consummate performer at all.  He's just breathtaking - and, I'm pleased to report, can be heard on several other volumes.

Without wishing to detail every one of the 24 tracks, I can say in all honesty that there's not one which I will not listen to again with great pleasure.  This record is on the 'essential purchases' list from this excellent series.