Voice of the People - Volume 13 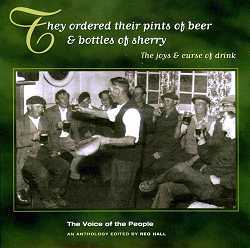 A CD of songs about drink could be rather one-dimensional.  But anyone expecting 75 minutes of rollicking drinking songs will be disappointed with this anthology (or relieved according to taste).  This is not so much a collection of drinking songs, as songs where drink has a major role.  There are items in praise of beer, stout, whisky and poteen, but as many outlining the often unfortunate consequences of drinking.

Chief amongst these are spending all one's money, and the breakdown of personal relationships.  Bold Doherty, for instance, is turned out of doors by his mother who disapproves of his heavy drinking and riotous lifestyle (this is beautifully sung by Mary Ann Carolan,

a singer I had somehow missed out on before listening to this series).  Micho Russell's When Mursheen Went to Bunnan (sound clip) tells of a man's regret at the loss of his loved one - again as a direct consequence of his having stayed out too many nights drinking.  And her father, with whom the singer had previously shared "many the full saucepan of beer" - wonderful image! - has also now turned "quare and severe" since his daughter moved away.  (There seems to be more to this song, incidentally, than is immediately apparent - I'm not sure what the significance is of his giving up "all my palaver with Yankees" in the final line).

Overall the CD has a good-natured feel to it, however.  My Old Hat that I Got On may tell of a character reduced to rags through excessive drinking, but Tom Newman's singing of the song has no sense of despair about it - it strikes me as more of a lively chorus song.  And while Davie Stewart's I'm Often Drunk and Seldom Sober is sung with all the vocal intensity you would expect from this singer, more typical is his other contribution, The Merchant's Son (both of these without accordion accompaniment, incidentally) - where although the consequences are unfortunate for the male protagonist, the audience are more likely to regard the song as entertaining or even comic.

George Spicer's Coming Home Late is another where 'the curse of drink' is presented in a comic light.

This song is worthy of inclusion if only for its final spoken line.  Having come home drunk on six consecutive nights to find increasingly obvious clues that his wife is having an affair, he concludes simply "I stopped home Sunday".  (sound clip)

George also justly rounds off proceedings with a spirited Barley Mow performed in a crowded pub in 1962.  One of the other stars of the show is Fred Jordan, who after all contributes what might be called the title track - When Jones's Ale was New.  Now, I remember going to a folk club where this was regularly murdered by one of the residents, and I never had much time for the song - until I heard Fred sing it at the National.  Here you get a 1974 recording, and it is sung to perfection - you can just hear the sparkle in his eye, if you know what I mean.  Fred also opens the CD with a nicely-sung John Barleycorn.

I hesitate to admit that one of the performances I don't particularly enjoy is that of Margaret Barry and Michael Gorman (Two Hundred Years a-Brewing).  In fact, heretical though this may be, I'm afraid I generally can't get excited about Margaret Barry's lightweight and comic songs, and I often find the fiddle accompaniment rather irritating.  Now this is probably just a sad reflection on my lack of critical faculties - however, I suspect also that I would feel differently had I seen the singer perform in person.  Certainly my views on Willie Scott are permanently coloured by the fact that I was able to see him sing - at the National Festival in, I think 1985 - when, although obviously very old and not in the best of health, he retained incredible dignity and character.  He contributes two songs to this CD: Jock Geddes and the Soo where a drunken encounter with a pig persuades a man to give up the whisky, and Piper O'Neill where (despite what it says in the liner notes) my reading is that the disapproval of the singer's mother is not sufficient to make him give up the whisky.  This is one of my favourite songs in the collection, with as good a chorus as you could hope for in a boozy singaround:

If this gives whisky its due, then poteen receives - as the notes point out - positive adulation, in songs from Paddy Tunney, Tom Lenihan, and John Griffin.  The timing of the latter on The Real Old Mountain Dew, recorded in New York in 1927, certainly puts his accompanist to the test - he basically sings it the same way he would have sung it without piano.  This is fine by me - I'm all for singers giving their accompanist a hard time.

There are several songs on this CD which might easily have found a home on other volumes in the series.  The Merchant's Daughter and The Bonnie Wee Lassie who Never Said No were previously anthologised as 'Songs of Seduction' by the Topic/Caedmon series, but this is fair enough as alcohol and seduction can so easily go hand-in-hand.  And the track from the Drayton Wassailers may have been left over from 'You Lazy Lot of Bone-Shakers', but drink is central to the wassailing tradition, so I can't really argue with its appearance here.  The performance, recorded in 1973, provides evidence of a continuing tradition - Cecil Sharp collected from wassailers at Drayton in 1909 (those who, as folk-singers or choirboys,

have had occasion to use the Oxford Book of Carols will recognise the Somerset Wassail, very little altered in the intervening period, although the "gurt dog of Langport" seems to have disappeared). (sound clip).  Louie Fuller's Young Maria, however, though a welcome inclusion on the disc, might perhaps be stretching the concept a bit far.  This is a version of Poison in a Glass of Wine where drink is, admittedly, quite literally the cause of the protagonists' death; but it's the poison that proves fatal - not the wine!

Having mentioned Louie Fuller, it is perhaps worth pointing out that there are only four tracks on this CD from women, which must be below the percentage for the series as a whole.  [Yes - that's 16.7%, whereas 22.8% is the percentage on the series as a whole - Ed.]  But this is probably not too surprising in view of the subject matter: the pub may no longer be a male preserve, but social values were very different when the singers on this disc were learning their repertoire.

Finally, the tunes.  This is one volume in the series where it must have been relatively easy to find dance tunes with appropriate titles - The Drunken Piper, The Bottom of the Punchbowl, The Teetotaller and so on.  (Mind you it does tend to confirm what I have long suspected: that you can find Scottish or Irish tunes with suitable titles for almost any anthology, but finding English material is far more of a challenge, since so many tunes - if they have a title at all - are simply named after the dance figure with which they were associated, or the musician from whom they were learned).  Of the three tune sets included here, the stand-out track for me is The Drunken Piper/Highland Whisky/The High Road to Linton

recorded in 1932 by Will Powrie on accordion, with piano accompaniment.  It's a fine set of tunes, and the playing is wonderfully crisp, with judicious use of ornamentation which stops well short of flashiness. (sound clip)

So to conclude, this is a thoroughly enjoyable collection.  It is full of strong performances - nothing too heavy, but with plenty of variety nonetheless. In short, if this had been a pub session, you'd have been sorry to miss it.