Just by way of a change, let's start with the music in this review.  Track 1 is from Texas Gladden, of Salem, Virginia, singing The House Carpenter.  Mrs Gladden gets three other tracks on this record - and why not? - she's without doubt the best singer here, and one of the best I have ever heard in my life.  The House Carpenter is obviously a good way to start a record of 'Anglo-American' ballads - though I do wonder how Scottish listeners will enjoy being referred to as 'Anglo', since the song is found far more frequently, and with far better texts, in their country than in mine.  Later on the Irish are similarly treated.  While it may be an obvious starting track it is not, I think, Texas Gladden's best song or performance here.  The best song, to my ears, is the superb One Morning in May (Maiden Cut Down in Her Prime), with its stunning first verse:

When I was a young girl, I used to seek pleasure,

When I was a young girl, I used to drink ale.
Out of a alehouse and into the jailhouse -
Right out of a bar-room and down to my grave.

But her best singing is not to be found on any such 'big' ballad, but rather in the simple lines of

Old Kimball (Skew Bald) which she'd learned "as a Negro work song".  In this brief 5-verse song - which never even gets round to telling the story of the race - she shows her skills (sound clip) by keeping the listener rivetted despite the lack of substance in the tale she's telling.

Lomax, in his unaltered 1942 notes, says nothing at all about the singer other than that The Devil's Nine Questions is sung with "great purity of style" and that she was "a mountain woman whose ideas and language were colored by her heritage from Elizabethan England". 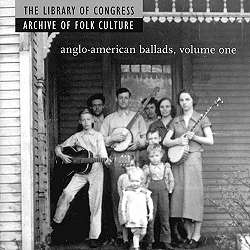 What ever he might have meant by these comments is never expanded upon.  Ringing phrases - but what, if anything, do they signify?  Clearly, Peter Kennedy may well have found the inspiration and exemplar for his sleevenote style here.

Track 2 finds fellow Virginian Horton Barker telling the story of The Farmer's Curst Wife, which Lomax defines as a "broadly comic version of the Orpheus legend".  Really?  Barker's is not a name one often hears these days -

an astounding situation on the strength of this performance.  As with Mrs Gladden's Old Kimball, he makes a truly superb job of making me interested in this tired old tale, singing with great subtlety (sound clip).  I said "on the strength of this performance", because I've also heard his solo LP (Folkways FA2362) where toward the end of the 18 tracks one gets awfully tired of the bonhomie, the warm, comfortable singing ... which sounds as if it's directed at a 1950's Women's Institute meeting.  This is probably grossly unfair to the man - who would undoubtedly be wonderful contributing a couple of songs in an evening's sing-around - but that is how the LP sounds.

Track 3 is Woody Guthrie with a pretty unconvincing version of Gypsy Davy - well, it is

unconvincing in this company - followed by Rebecca Tarwater, of Rockwood, Tennessee, with Barbry Allen.  I swear this woman is Jane Turriff's American cousin! (sound clip).  She has only six verses of the ballad, but it's an electrifying performance from a singer I've never heard, or heard of, before.  Is there more, can anyone tell me?

Next up, E C Ball sings Pretty Polly, which Lomax eulogises at some length as an American gem hewn from the "clumsy and dull and unpalatable" original Wexford Murder.  I can only say that the rhythmic guitar backing (as with Guthrie's) almost wholly removes the tension from both the performance and the story.  Compare this with Sarah Makem's Banks of Red Roses, which tells much the same tale in a far more convincing way.  But we get two versions of Pretty Polly on this disc - the final track (13) is the same song by Pete Steele of Hamilton, Ohio - and I'm very pleased that we do, because this one's a stunner!

In my recent review of Shanachie's execrable 'Thousands are Sailing' CD, I commented that "the Americans have been doing accompaniment for long enough to have found the trick of not getting in the way of the song - some of them, anyway".

Pete Steele makes this case admirably - the "racing tempo of his banjo" doesn't interfere at all with his phrasing of the lines - and as he gets into telling the story he just sings straight through his own accompaniment (sound clip).  The tension between the two just adds to the tension of the words - you know he means them.  Wonderful stuff!

Perplexingly, Steele's version is called "Pretty Polly (Ballad)", despite the fact that his text is virtually identical to E C Ball's.  Moreover, in his notes to this one, Lomax ascribes the English Gosport Tragedy as its progenitor and goes on to cite themes from The Ghost Ship and the Perjured Ship's Carpenter in support of his description of a ballad which seems to me to be utterly unconnected with Pretty Polly.  Still - if The Farmer's Curst Wife is the Orpheus legend, then why can't Pretty Polly be The Ghost Ship ... or The Wexford Murder, when Estil Ball is singing it, for that matter?  Who knows?  Certainly not me - I'm not a world-famous and revered musicologist.

Lomax strains my credulity even further when, dashing off at a tangent, he gets excited about the popularity of the name Pretty Polly in English balladry.  Casting around for examples to cite, he wisely avoids the girl from Paddington Green, but stumbles unhappily upon "Pretty Polly, the King's daughter [who] hurled her lover over a cliff when he sought to rob and murder her".  I wonder what pet-name they have for parrots in the USA?

Track 12 is The Lady of Carlisle by Basil May - and this is the version so belovéd of the 1960's revival in England.  I don't think I've ever heard May's performance before, but so faithful were the versions by Peggy Seeger and all those who came after her, that I feel as if I've known it all my life.  Basil May is another singer who plays his own accompaniment (guitar, this time) and then completely ignores it when he gets involved with the words of the song.  He is from Kentucky where "the guitar has [only] invaded the mountains in the last twenty years" [this was written in 1942].  Lomax suggests that the old style of melody and performance has been "strongly affected" by its recent dominance - "forcing ... conformity to the conventional major-minor patterns; the strict two-four and three-four rhythms of the accompaniments sometimes distort a ballad's cavalier form".  Maybe so, but no-one told Mr May.

Pearl Borusky, recorded when living in Wisconsin but originally from Kentucky, sings The Rich Old Farmer, which turns out to be a version of The Girl I Left Behind Me.  She's a good singer, but not in any way remarkable, and the same can be said of the other performers not yet mentioned.  Emery DeNoyer, also from Wisconsin, has a very long logging ballad called The Little Brown Bulls and Texan, Alex Moore, has a cowboy song of an encounter with The Sioux Indians.  Both of these, being fairly recent occupational songs, have probably not passed through a sufficient number of mouths in the oral process to have their rough edges knocked off and I wouldn't recommend them for repeated listening.

Well, that's the music - all 38 minutes and 17 seconds of it!  Almost exactly half the CD is blank - and I honestly couldn't recommend anyone spending good money on 12:21 minutes of that (the four weaker songs).  So you've got slightly less than 26 minutes of wonderful music for fifteen quid - is this good value for money, given that this is now the third reissue on a new medium (78, LP, CD)?

And then there are the booklet notes to contend with.  Regular readers will know that I am not alone in sometimes being enraged by Rounder's booklets, and this present production is no exception.  Every song text transcription is inaccurate to some degree, and Lomax's song notes contain lots of the sort of nonsense I've already mentioned as well as several disparaging asides like "Surely that is Bull Gordon?" when DeNoyer sings "bold Gordon".  We are also treated to Wayne D Shirley's 1978 Introduction to the LP re-release - and if Lomax is disparaging, Shirley is sometimes almost insulting to the performers he's talking about.  He spends nine full pages explaining the history of the Library of Congress, outlining its motivations and assumptions, and charting the history of this series of records and their various incarnations.  In the process he adds nothing to the paltry scraps of information which have emerged in Lomax's notes about the people we're listening to - and they are the show we've come to see, when all's said and done.  And, almost inevitably, there are a series of fatuous excuses for the mis-transcriptions, the inaccuracies, the lack of information ... for everything which would make this production so profoundly depressing, were it not for the 26 minutes of wonderful music.

If you have money to burn, buy this record for the few great performances which are unavailable elsewhere.  If you don't - spend your money on Stephen Wade's Treasury of Library of Congress Field Recordings (see our Review).  This CD, also from Rounder, has everything that Anglo-American Ballads lacks - including a superbly researched and edited booklet and 30 - yes 30! - tracks, many of which duplicate those found on the present offering (you can compare the track lists in our Traditional Discography).  It also has Jess Morris's performance of Goodbye Old Paint.  No contest!