The Beautiful Music All Around Us:

Field Recordings and the American Experience
by Stephen Wade 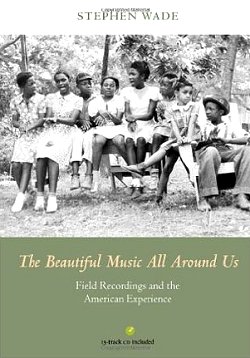 Stephen Wade's book has its origins in the CD, A Treasury of Library of Congress Field Recordings (Rounder CD 1500), which I reviewed for MT in 1998.  The Beautiful Music All Around Us is now in its fourth printing, and has received the ASCAP Deems Taylor Award, and an ARSC Award for Excellence.  This review comes late to the party, therefore, but it considers a book that all readers of this website need to be aware of.

The Rounder CD presented 30 tracks, and knowing Stephen, I'm sure that he would have liked to have written a chapter on every one of them.  Inevitably, what we have is less than that in regard to quantity, but decidedly not short on quality.  Its twelve chapters each deal with one artist, although the total number of songs discussed, and included on the illustrative CD, is a baker's dozen, because Ora Dell Graham gets two (and two minutes playing time.)

Each chapter discusses the song included on the CD, in terms of the particular performance, earlier and later versions, the meaning of the song for the artist and her/his community, and its after-life in folk and popular culture.  (Wade even managed to interest me in the use of Rock Island Line and Sea Lion Woman on the soundtrack of a John Travolta movie.)

There is also as much biographical information as can be gathered, ranging from very full for the likes of Jess Morris, a voluminous correspondent and self-documenter, to scarcely anything for the members of the Nashville Washboard Band or the convict Charlie Butler, whose sad-eyed prison photograph is haunting.  ('Bad case and one of Beal Streets bad boys,' the District Attorney wrote on his court record.)  The process of researching the singers' lives and deaths is also described, in encounters with relatives and acquaintances that range from friendly to tense.  A conversation with a retired schoolteacher takes an unexpected turn:

As I got up to leave, she took her other hand from her pocket, drawing with it an unholstered, snub-nosed, .38 caliber revolver.  I suddenly realized that the whole time we talked, she had it pointed at me.  She revealed it now as a statement of trust.

The assiduity with which Wade has tracked down people and documentation is extraordinary; in these pages, we learn that the original version of Rock Island Line was discovered in the railroad's booster club magazine, and find out how Isaac Shipp came to learn songs in Sierra Leone and the Belgian Congo, a puzzle which I noted in my preamble to the review of the Treasury CD.  (Wade describes Shipp, who died in 2007 at the age of 91, as 'a truly amazing man.') We also encounter the descendants of Bill Stepp and Pete Steele, of Texas Gladden and Luther Strong (a violent drunkard, whose children seem to have survived their upbringing remarkably well.) In the introduction, we also meet Ella Hoffpauir Boudreaux, ten years old when she sang Sept Ans Sur Mer with her sisters, and living in conditions where a fantastical song about hunger had all too realistic resonances.

These are just a few of the people who give testimony.  Throughout, Wade lets them speak in their own voices, and tell their stories in and on their own terms.  The richness of even the poorest lives (Bill Stepp's first five years were spent in a cave) is conveyed through the informants' own words, and in contextualisations, explanations and comments that are insightful, humane and beautifully written.  And I must further praise it for not having even the faintest whiff of ‘the old, weird America’ cliché.

The amount of factual information contained in The Beautiful Music All Around Us, and the depth and richness of the commentary on it, are both astonishing.  Considerations of space perhaps prompted the omission of the Bahamian Pindar Family's Ain't No Grave Gonna Hold God's Body Down, with Joseph Spence on guitar (on The Real Bahamas Volumes 1 & 2, Nonesuch Explorer Series) and closer to home, of Skip James's She Lyin' (on the eponymous Gene's GCD 9901).

Minor points like these can be made about any work; more significantly, but only as part of the reviewer's duty to prove that attention has been paid, I was disappointed to see the acceptance of AL Lloyd's claim that Saint James Infirmary Blues is related to The Unfortunate Rake.  Robert W Harwood, I Went Down to St.  James Infirmary (Val Marie, Saskatchewan, 2008) makes a convincing case that, although there is a thematic similarity, there is no musical or lyrical connection.  (Confusingly, Harwood then surrenders to the argument from [Bert Lloyd's] authority, and accepts that there is one!)

It is also regrettable that when discussing the Insiders and the Stardusters, respectively white and African-American bands set up by music director Wendell Cannon at Parchman in the sixties, Wade was unaware of Bill Greensmith's Ben Wells and the Confiners in Blues & Rhythm 93, October 1994.  This article contains much interesting information about the Stardusters (who were billed as the Confiners on their 45 because there was already a free-world band called the Stardusters.)

Having fulfilled my obligation to carp, let me conclude, since he summarises what I want to say better than I can, by quoting and endorsing Robert Cantwell's comment on the back cover:

In revisiting the human transactions at the heart of these recordings, Wade essentially grants the songs a new life for a new age.  Among the book's many virtues are its lively and imaginative narrative interpolations, its vivid song descriptions, its fascinating investigative work, its many colorful personalities and absorbing life-histories, and its often trenchant accumulation of detail.  A magisterial, monumental work of tremendous sympathy, scope and imaginativeness.

Postscript: by a sad coincidence, I wrote this review a few days after learning of the death of Judith McCulloh, editor nonpareil of this and many other books on folklore and ethnomusicology for UIP.  See http://blogs.loc.gov/folklife/2014/07/judith-mcculloh-1935-2014/ for an account of her life and achievements.  The review above considers The Beautiful Music All Around Us in terms of content; this is the place to add, because it is no doubt thanks to Judith, that the book is also beautifully made: printed on high-quality paper with wide margins, sturdily bound and generously illustrated.  It also has - glory be! - properly numbered (and often richly informative) endnotes, rather than leaving the reader to guess whether there is a note, and if there is, referencing it by quotation.  How this can be done for just under thirty bucks, I have no idea, but I am deeply impressed that it can.