Waiting for the Boatsman 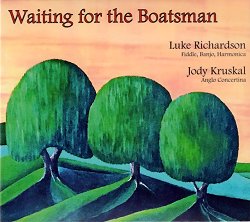 I've received two CDs of music to review in the past week; one was by a young English Melodeon player, and this one by a rather older American anglo-concertina player, plus his fiddler mate.  I don't know how many CDs Jody Kruskal has made, but, judging by the record number JKM 107, this is the 7th on his own label, and surely one or two more on other labels.  The young Englishman's is his first.

Inevitably, on your first record you do tend to pull out all the stops and show just how clever you are, while when you have several already in the bag, I suspect that you can relax ... and just play the music!  That seems to be the case here - which is why I'm reviewing Jody's, and not the other one.  Because this is a CD full of lovely music played, it seems to me, for its own sweet sake.

And very sweet it is, too.  And while I'm no expert on American music, I can certainly recognise quite a number of the tune titles, above, but I don't think that I've ever heard any of them in the versions played here.  In my review of Jody's JKM 104 American Songs and Tunes from 2010, I wrote: Bearing in mind that American traditional music is a very different beast to what we have in England - so that many of the tunes heard on the CD have known composers - this is definitely traditional music!  The same is true here - although I didn't notice any composers mentioned in the brief but perfectly adequate tune notes - but every tune has details of a source either from recorded or broadcast listening, or direct personal knowledge, of the traditional performers from whom they were learned.  If only people could say that in this country!

There are two differences between the two CDs; American Songs and Tunes, rather obviously, contained songs as well as music, and Jody's fiddling partner on the first was Paul Friedman, while it's Luke Richardson on this one.  I'm slightly sorry about the first omission, but very pleased about the change of personnel.  I prefer Luke's fiddle playing, and he's also a dab hand at banjo and harmonica.  All we need is some nice piano back-up, and I'd be in heaven.

What about the tunes?  I'd like to give you sound clips of almost everything, but I think a couple will have to do.  Here's track 5, Old Town Band, with the 'standard' line-up of Dipper D/G Anglo and fiddle.  And I'll follow that with another favourite, track 14, Butcher's Row, with Luke on harmonica this time.  Lovely stuff, I'm sure you'll agree.

It's not very often these days that a CD pops through the letterbox which isn't a great disappointment - this one, however, is a real delight!  You can get it from www.jodykruskal.com