Classic Blues Artwork from the 1920s

“Here I am amongst ye, and I’m here because I’m here.
And I’m only twelve months older than I was this time last year.”

Would you Adam and Eve it!  A whole year has gone by since I knocked up that tasty little missive on the 2004 Blues Calendar, and which Rod obligingly posted on this site. 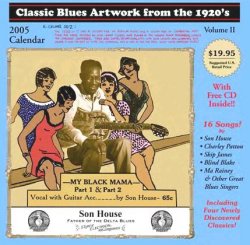 Well it must be so, because here’s the 2005 version, bright eyed, bushy tailed and ripe for review.

At any rate, it would be ripe for review, except that so little has changed, one scarcely feels that a fresh notice is required.  We find the same layout and there is much the same introduction and much the same advertisements and credits.  We do though find some new photographs and anniversary dates, and there are eleven fresh Paramount posters, and a new giveaway CD.

Yes I did say eleven posters.  Any surfer with a good memory, or the patience to look up what I wrote last time, will recall some misgivings over retouchings, superimposed photographs etc.  Well, the retouchings and superimpositions, if superimpositions they be, are still in evidence, although the latter are now fewer and generally look less intrusive.  However, they are joined by a most un-Paramount looking poster, which shows a photograph of Son House surrounded by a collection of adoring flappers.  The publicity handout describes this as, “a clever mix of classic photography and cartoon drawings”; by which I presume is meant that it is a computer generated, colorised synthesis.  That at least is what it looks like.

The other posters are resplendent and evocative, as only Paramount posters can be, and they would make a grand embellishment to anyone’s wall.  What’s more, those of us who can’t tell one day from the next still have the CD to enjoy.  Like last year’s, it consists of twelve titles to accompany the posters, plus four bonus recordings.

January gets off to a grand start - new year hangovers and all - with a characteristically eerie Drunken Spree from Skip James.  As blues reissues go, this is somewhat less overworked than Skip’s 22-20 Blues, which the previous calendar used; and I guarantee, it will send shivers down your spine.

It is followed by Son House, on steaming form as always, with My Black Mama.  This is from a double sided disc and both sides are reproduced here; so the delighted listener will find seventeen tracks, rather than the advertised sixteen.  Of the others, June will see you bemoaning yet another Sitting on top of the World, from the Mississippi Sheiks, while July serenades us with, Oh God not again, Pony Blues from Charley Patton.

These two apart, I wouldn’t describe any of the calendar tracks as over-reissued, and you certainly won’t hear me decrying their entertainment value!  In particular, I relished the superb Ma Rainey and her vaudeville confrere, Ida Cox.  The Careless Love tune which Ma uses may be hackneyed by now, but Ma’s performance certainly isn’t.  This is vintage Ma Rainey; a tour de force if ever there was one.

It’s the bonus tracks which bother me.  According to Blues Images, all four are newly discovered or recently discovered, depending on whether you read the publicity handout or the calendar.  Into the bargain, the calendar claims that two of the four are ‘previously unreleased’, though it doesn’t say which.  But what constitutes newly discovered and previously unreleased?  The first two titles (King Solomon Hill: My Buddy, Blind Papa Lemon, and Blind Joe Reynolds: Ninety Nine Blues), are respectively available on Yazoo YAZCD2068, Times Ain't Like They Used To Be - Volume 8, and Document DOCD-32-20-04, Troubled Hearted Blues.

The other two titles are from the Memphis Jug Band, and the calendar correctly informs us that these were cut in Richmond, Indiana in August 1932.  No recording numbers or personnel are listed and the record company is not mentioned.  Given this calendar’s history, one might assume that they must have been cut by Gennett, at their Richmond studios, on behalf of Paramount.  From there, one might also assume that they were part of the stash of Paramount material, which Blues Images bought a few years ago, and which provided the initial impetus for these calendars.

Well, the titles were certainly cut by Gennett, but they were released on their cut price Champion label; Champion 16615 to be precise, with the MJB masquerading as the Picaninny Jug Band.  You can find CD transfers of both tracks on Document 6002; The Memphis Jug Band, Complete Recorded Works (1932-1934), and they have been available on various LP reissues, going back as far as 1954.  So claims that they are newly discovered seem a little bit thin.

What’s going on here?  Well, an e-mail to John Tefteller, who owns Blues Images, confirmed that he recently turned up the Hill and Reynolds titles (The other sides of both discs appear on the 2004 calendar, by the way.); that he had given permission for Yazoo to use them; and that these are the ones which he describes as previously unreleased.  Also, the Memphis Jug Band tracks come from a Gennett copy which he recently unearthed; all previous CD and vinyl releases of these titles having been copied from a poor quality Varsity reissue.  Thus, there is a limited amount of justification for both claims, and I must agree with Mr Tefteller when he says that the sound quality here is much superior to the Varsity pressing.

Nevertheless, I would advise John Tefteller of the need to qualify his terms in cases like this.  First of all, blues buyers can be a pernickety lot where recording and issue data are concerned, and they do not like misleading information.

Moreover, to baldly describe these sides as recently discovered and/or previously unreleased, could leave the publisher open to accusations of misleading the public.  I do not know the legal position in the USA, but in Britain, I’d have thought that claims like these sailed a little too close to the law on consumer protection.

There is something else which wasn’t in last year’s calendar.  This one has an advert for upcoming projects from Blues Images.  The first item on the agenda is a coffee table book of artwork from Paramount and other race labels.  I look forward to its publication, but I trust that it will be devoid of ambiguous claims, and cartoon flappers.