The Legends and the Lost
by Tony Russell 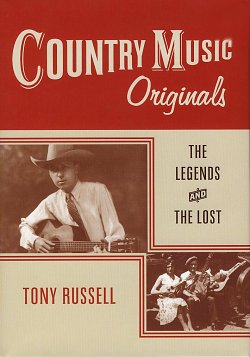 Three years on from his epochal (in more ways than one - it seemed to be an epoch in the making) comprehensive discography documenting the pre-1942 corpus of recorded US old time music sees Tony Russell distilling four decades of intensive study of the lives of those performers catalogued in the earlier work into this handsome hardback volume from the same publisher.

Right off the bat comes a memorial dedication to old time scholars Charles K Wolfe (who died in 2006) and Bob Pinson (in 2003), to whom we consumers and Russell himself owe an enormous debt.  For this is very much a distillation of research undertaken over the past half century by a bewildering array of individuals.  Material resulting from this research has appeared in a wide variety of published sources.  Books are merely the most accessible tip of a rather large iceberg.  Just below the surface sit a corpus of serial publications such as the JEMF Quarterly (see my review of an anthology of collected pieces), a raft of regional US folklore and music journals, and of course Russell's own groundbreaking Old Time Music.  Between 1971 and 1989 this periodical (which, excepting for its physical appearance, was, like Musical Traditions itself in hardcopy, far closer in quality of content to a journal than a magazine) published substantial major pieces on singers, musicians, record companies, discography, social context and retailers cum talent scouts such as Ralph Peer, in addition to shorter, more intangible and speculative items which once in a while led to major breakthroughs in locating descendants of recorded artists, or even, on rare occasions, the actual performers themselves.  Deeper down our imaginary iceberg lies the real esoteria, harder both to locate and grasp: sources such as amateur magazines like Hobbies, contemporary (1920s through 1940s) publications catering to the rural consumer of mass-produced culture, in the form of, for example, song folios and radio schedule guides, and (perhaps most under-researched of all) the vast body of regional newspapers.

The author has sought out and assimilated a good deal of this basic source material and much more.  The end product now under review takes the form of a chronologically-arranged series of brief biographies to which are attached even briefer playlists indicating where to hear tracks in the CD format by each of the chosen artists.  Practically every entry features at least one photograph of the named performer, and in addition we get the bonus of further contextual images such as 78 rpm record labels, song folio covers, advertising copy, and facsimilies of newspaper articles (regrettably at times, as that on page 127, lacking details of provenance).  Among the rare exceptions is that of the rather obscure Bernard 'Slim' Smith, who was little recorded, but whom Russell assiduously tracked down and interviewed.  Did he take no photograph of the man at that time?  The image which services this entry (page 144) depicts the wonderful Hawaiian virtuoso 'King' Bennie Nawahi (the connection being that Smith recorded with him) and a backing group identified as 'The Rocky Mountaineers'.  Bizarrely, 'King' Bennie appears to be eating the head of his ukulele, in order to facilitate the vast number of instruments arrayed before him, no doubt.  And is that really a youthful Roy Rogers (real name Leonard Slye, who surprisingly is given no entry here, despite the inclusion of fellow 'B' Westerner Gene Autry) standing centre stage?  Once in a while a performer's photograph punctures popular preconceptions.  The best example in this work is that depicting Dempsy Jones and Phil Featherstonhaugh, who recorded some marvellous titles (including a number of exquisite mandolin/tiple instrumentals) as The Golden Melody Boys.  Here, on page 126, we find them poised playing their instruments before a microphone, and looking rather pleased with themselves.  Unlike many others within the genre, however, there is no nod towards creating any illusion of rusticity or Western-ness.  Demps and Phil, as they were also known to record buying punters, are clad immaculately in dinner jackets, starched white shirts and bow ties.  The accompanying playlist offers a sad comment on the failure of contemporary CD producers to keep much of this music in print.  One track only, it appears, is currently available.  And yet, in the vinyl era you could happily have heard five times as many on Early Country Music (Historical HLP 8002), plus yet a further track on Paramount Old Time Tunes (JEMF LP 103).

Much of the visual material has been published before, although you would now be hard-pressed to find copies of OTM, JEMF Quarterly and the like to purchase, but a not insubstantial portion was new to me.  Among the genuine gems is a full page photographic spread (on page 33) lifted from The Daily Oklahoman of 30 March 1919.  One photo has Georgian fiddler and vocalist Gid Tanner in a manic pose, reflecting his antics heard on numerous recordings.  A second depicts five further musicians, three of whom - Land Norris, Fiddlin' John Carson and Earl Johnson (the latter couple rate their own entries in this volume) - were frequently before a microphone during the pre-Depression hey day of the commercialisation of old time music.  Two other fiddlers are shown in the grouping, one unnamed, the other identified as 'Uncle' Billy Porterdale, both clearly of an earlier generation, and one regrets in passing that more carriers of the immediate pre- and post-Civil War musical traditions failed to coincide with the new recording technology.  How different was their playing style and repertories of tunes to that of the generations which supplanted them, with their increased exposure to influences external to a cohesive cultural societal whole?  And given that these older performers would have evolved their musical skills within a context in which dance accompaniment was paramount, in what manner did this dictate both shape and rhythm (and hence bowing and fingering techniques) of the tunes (a useful recent analysis of these factors, with many others, may be found in the recently-published book A Florida fiddler.The life and times of Richard Seaman, by Gregory Hansen).  All that said, it would be difficult to imagine a style which, both vocally and instrumentally, appears to have been less affected by any notion of modernism than that of Fiddlin' John Carson (born 1874), whose archaic-sounding techniques (if, indeed, that isn't simply one of my own personal preconceptions, with little actual basis in reality) obviously struck a deep resonance with a portion of the record-buying public between 1923 and 1934.  In fact, a handful of fiddlers born during the 1840s did commit a segment of their repertories to wax, and the resulting output does (to my ears, at least) indicate that there was indeed a differently-nuanced earlier style of performance.  Listen, in particular, to Captain M J Bonner (who is given no entry here, but whose regrettably few recorded titles are available on Document DOCD-8038) for one of the most goosebump-raising moments in the entire old time corpus.  [Captain M J Bonner plays Yearlings in the Canebreak on MT's similarly named CD (MTCD103) in our Old Time series - Ed.]

Postscripts added to various of the entries provide fascinating additional insights into, and amendations to, conventionally-accepted wisdom.  The most significant for me is that appended to the biography of Ed Haley, a blind fiddler born in West Virginia in 1884 whose stylistic influence was widespread among many younger players throughout both that and adjoining states in which Haley travelled widely.  He never recorded for any of the commercial companies, and his aural legacy lies in a series of home recordings (more than a hundred of which are extant) produced, it has always been assumed, simply for personal satisfaction.  Russell now reveals (pages 79-80) that 'recent research in West Virginia newspapers provides grounds for questioning' that assumption, and offers an extract of an advertisement discovered in The Charleston Gazette of 27 September 1930 : 'if interested, either as a seller or user, in 10-inch double-faced Phonograph Records, made by him, price 35 cents each, write Ed Haley Co., Huntington, W. Va.'  This would have involved a labour-intensive process, seated before a recording machine and playing through each selection as many times as were required to fill any outstanding orders.  Three decades earlier this had been echoed in Scotland by champion melodeon playing brothers Peter and Daniel Wyper (see my article on them), in Ireland by yet another melodeon player, A J Scott, and, earlier still, in America by Uilleann piper Patsy Touhey.

Russell generally shows a nice turn of phrase which may be at odds with that demanded by strict academic publications, but which sits well in a volume that needs to exhibit the broadest possible appeal.  The instruments of Da Costa Woltz's Southern Broadcasters, for instance, 'pierce the murk of surface noise like a lighthouse beam on a dark night' (page 24); while of Hoyt Ming's group he writes (on page 122), 'The hour or so they spent making records in the Memphis Auditorium would buy them a time-share at Immortality Court ...'

Each individual entry is made up from sundry component parts.  Among these might be basic details of recording and other performance experiences, quotes from either the musicians themselves or those who knew them, partial transcriptions of a song or skit, the whole overlaid with Russell's perceptive and insightful analysis.  One excellent example of this may be found when he discusses (on page 107) the vocal interjections to be heard on many of the items recorded by G B Grayson and Henry Whitter:

The effect of these homely devices is to relocate the mythlike narratives of half-forgotten seductions and murders in the known present: to ground them in the familiar geographical, social, and ethical landscape of '20s Appalachia.  That this terrain was itself shifting uneasily beneath the pressures of modern life was all to the point: their tales, Grayson and Whitter might have argued, were, in their essence, for all time.

This is quite unlike any other equivalent documentation of the genre that I have seen.  Most of those that have gone before - The Illustrated Encyclopedia of Country Music (London: Salamander, 1977) or The Encyclopedia of Country Music (Oxford & New York: OUP, 1998), for example - cover the entire spectrum of performers from Texas fiddler Eck Robertson (the very first to record, in 1922) to whoever was big in the business at the date of publication.  If it has any precedent at all, that work is surely Kip Lornell's geographically more modestly ranging Virginia's Blues, Country, & Gospel Records 1902-1943 (Lexington: University Press of Kentucky, 1989), minus the actual discographies, which, as already mentioned, Russell has now finally sorted out for good and all.  Taken together, that self same complete discography and the present work form a solid bedrock on which to build a broader appreciation and historical understanding of this often remarkable, yet often ephemeral music. If you have any interest in the genre at all this is certainly an essential buy.