This is one of those difficult to review CDs - how much of it might be considered 'traditional'?  What is its place in the pages of MT?  How much do I know about the subject - and is that enough?  Will the 'average' reader find it interesting?  Whatever the answers to these searching questions may be - I can only say that I find the record fascinating, and I hope that some of you will too.

The CD has been compiled by Dick Spottswood and comprises 24 tracks.  Most feature accordion(s) as the lead instrument, but one is clearly audible even when this is not the case.  The only exceptions are two tracks featuring the concertina, and one, the harmonica.  Quite why, we are never told.  In fact, we are told nothing of any real substance about any of the instruments used on the record - not even if they are diatonic or chromatic, except in the case of the two Acadian tracks.

It would not be unreasonable to find that Mr Spottswood does not have this information - since the original recordings date from as early as 1920, and the most recent is only 1956.  Nonetheless, it would have been better to have admitted the lack, rather than just ignored it.

Another reason for the lack of hard data might well be the relative obscurity of much of the material presented - of the performers, only Santiago Jimenez, Joseph Falcon and The Hanafins were already known to me.  This, to my mind at least, is a very considerable plus point.  So often, with anthologies of this type, one ends up buying only 50% or less, of unfamiliar material.

A statement concerning the rationale behind the selection is also conspicuous by its absence, although it's quite clear that there was one - this is not just a 'my favourite accordions tracks' record, by any means.  We get several tracks each from - in order - Italy (2), Poland (3), Ireland (2), Rumania (2), Mexico (2), South Africa (2), Jewish central Europe (2), Scotland (2), Greece (2), Cajun (2), Canada (1), Slovenia (1) and the Dominican Republic (1).  The foregoing indicates only the likely melodic and stylistic provenance of each of the pieces - almost all of them were recorded in the States, principally in Chicago and New York.  One is tempted to ask "Why did Poland get more, and Canada fewer, tracks?"

In fact, the more one considers the selection of the material presented here, the more questions emerge:

A simple statement of the selection rationale (customary, if not mandatory for an anthology, I would have thought) would have settled the matter, and left one able to enjoy the music without being continually niggled by such questions as these.  This is by no means the first complaint in these pages regarding the completeness (or lack of it) in Rounder's insert notes.  About time they started taking some notice, you might think?  Why not write to them at: Rounder Records Corp., 1 Camp Street, Cambridge, Massachusetts 02140, USA. 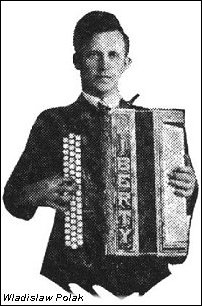 So - let us, indeed, go on to enjoy the music.  The two Italian tracks are described as tarantellas, recorded in New York in 1932.  The first, Tarantella Teggianese, by A d'Ella, is a very well played simple example, where the serial nature of the development can be clearly seen.  An unnamed player adds clappers/bones type percussion.  The second, Dormi e Riposa, by G Gangone, is not a tarantella, I think.  Nor is it very well played or sung.  Both players use diatonic instruments.

Poland is represented first by Wladislaw Polak with Ostanina Wola Pijaka (the Drunkard's Last Will), from 1928.  This was a follow-up to his apparently popular Drunkard's Lament, and is a parody of the 'deathbed funeral instructions' songs (like A Sailor Cut Down or Little Sir Hugh, according to the notes).  In fact, it has a lot more in common with Jug of Punch in terms of imagery.  The piece is unusual in that, though the instrumental refrains between the verses are in straight polka time, the verses themselves have an uneven line length - throwing a regular beat out by half a bar on the second and fourth lines. 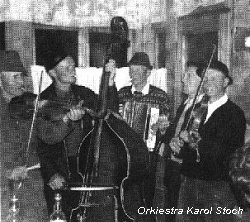 The 1950 recording of Kumotersko, by Orkiestra Karol Stoch is a very exciting affair - sounding far older that the previous track.  The band sports three fiddles, bass and accordion with 'Solovox attachment'.  I am unfamiliar with this effector, but it appears to make this accordion sound more like a whistle than a free reed.  There are  also three singers - a splendidly harsh voiced woman attacking the verses, joined, with gusto, and cries of "Ai-yah!" by two men on the choruses.

This is just the sort of thing I love - though its inclusion in an accordion anthology seems questionable, since the instrument is barely audible most of the time.

The third Polish offering is one I could well have done without - it's not even an accordion track.  This concertina piece, 'Paul's Waltz', is a pleasant enough little tune - though by no means well played.  But the singing!  Bruno Rudzinski goes "Ni - ni - ni ni - nini" along with the tune, in a very unmemorable voice, for what seems like about six, absolutely identical, verses.  Apparently, a street beating, a few months after this recording, left him unable to sing again.  Maybe his assailant (a music lover, perhaps?) had heard the record?

Mercifully, we go straight from that into The Mason's Apron by Frank Murphy on a diatonic box (probably a one-row) with a reasonable piano backup.

It really does make a lovely change to hear a reel played on a non-chromatic box - and Frank makes a pretty good fist of it, playing the music and not the instrument (sound clip).  Connie and Michael Hanafin seem to be doing equally well with Rodney's Glory, despite the efforts of Dan Sullivan, who does his best, and worst, on a very loud piano.  One wonders why otherwise seemingly good musicians were prepared to put up with this sort of thing in those days.  Perhaps they had little choice in the matter - see later comment.

If Dan shows how to get in the way of the music, Margarita Radulescu gives a perfect example of how to accompany free-rhythm singing (not an easy job) in a way which enhances without ever intruding.

But if her accordion playing is exemplary, her singing of In Padure la Ghergani is out of this world (sound clip).  I'd happily buy the CD for this first Rumanian track alone.  George Jivan's accordion solo, however, is poorly executed and unintentionally arhythmic.

The second concertina piece (definitely one of those big, cardboard Anglos) is Ulele Izweni, by Mahlautini Luthuli.

We have heard many similar songs, and performances, on 'Zulu Jive' and its successors, but none better than this; a simple song, played and sung with skill, feeling and - that rare commodity - care (sound clip).  Joseph Dingaan's harmonica song Nonyembezi is equally worth hearing for the same reasons - with the added interest factor of having been one of the many developments from Solomon Linda's 1939 hit, Mbube, which eventually emerged in the West as Wimoweh, not to mention the bloody Lion Sleeps Tonight.

The Jewish accordionist Mishka Ziganoff (recorded in 1929) plays a Rumanian doina with all the usual flourishes.  It may be very clever, but this is the sort of virtuoso playing I really dislike.  He takes exactly half of the playing time with those interminable lead-ins, full of chromatic glissandi and meaningless flash, going nowhere.  He was a hell of a player though, and on his second track, Tzyganski Hopak, he uses his technique more in the service of the music.  This Russian Gypsy dance tune is played at very high speed, and he is clearly regretting the tempo by two thirds of the way through, but grimly battles on to the end.

I though that the melody sounded familiar, and research among friends who know about such things reveals that the A part is very similar to the Grand Irish Barndance (Star Spangled Molly - De Dannan), and the B part is used in The Kerryman's Daughter (Joe Burke - the banjo playing one - and Charlie Lennon).  What might be significant about this is that Charlie's dad, Maurice Lennon, lived in New York in the late '20s and '30s, sharing a house with a load of mid-European musicians.  Given that he is generally credited with being the man who brought (or brought back?) the mazurka into Irish music, one is tempted to wonder whether these two bits of melody might also have found their way here under his aegis?

The next track, Miss Jessie Smith/The Kirrie Kebbuck/Petronella, comes as a breath of fresh air after Ziganoff's flamboyance. 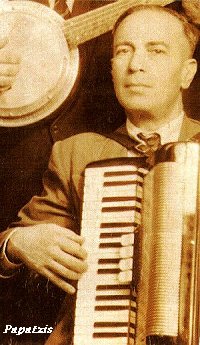 This is lovely, lively dance music, which utterly deflates the concept that it's impossible to play this way on a big accordion.  The second Scottish track, Bob and David Dalrymple's Brig o' Perth/Inverness Gathering (1933) is, possibly, even better; the two accordions sounding almost like one instrument.

Greek rembetica was, apparently, rarely played on the accordion, at least around 1930.

But the two tracks included here, Politikos Manés and Ploiticos Sirtós, featuring Papatzis (Andonios Amiralis - photo right) admirably demonstrate that he, at least, could do the business with the best of 'em (sound clip).  Again, the purchase would be worth it for these tracks alone.  Wonderful stuff!

The two Acadian French tracks feature Columbus Fruge and the lovely Joseph Falcon (see review of his most recently released CD).  Columbus doesn't sound typically Cajun - I think he plays his one-row in the conventional manner, rather than 'backwards'.  Nor do I think he intentionally sang several of the verses of Saut Crapaud in a different key to his box.  Joe Falcon's Ne Buvez Plus Jamais, however, is just great - Cajun from when it was still traditional music.  Interestingly, the following French Canadian track, Reel de Berthier by Vagabonds de Montreal, sounds musically much closer to Joe than to Columbus, despite the relative distances involved.  Also interesting, and amusing, is the information in the notes that the accordion is accompanied by guitar, bones and bombarde (jews harp).  I guess he meant to put guimbarde - I'm sure even I would have noticed a bombarde!

The Strukelj Trio were part of the Slovenian music scene in Cleveland, and their accordion, violin, banjo line-up was typical, apparently.  Their Italijanski Valcek is pleasant enough, whilst not sounding particularly Italian.  And finally, Luis Vazquez's sizeable band of musicians and singers performs the merengue Apaga le Luz with warmth and charm - making a pleasant finale to the record.

It has to be said that a small but significant proportion of these performances could have been better.  Given that the whole of the recording process was so expensive and so completely outside the control of the performers, it is not surprising that so many records from the first half of the century are seriously flawed.  Today, Mishka Ziganoff might have re-recorded his second track a little slower, and George Jivan - who was playing far better by the end of Ardeleanca din Banat - would have done a second take when his nerves had settled.

But my criticisms fall mainly upon the presentation of this CD, rather than upon the material.  The vast bulk of this is very well worth listening to, and a good deal of it is absolutely wonderful.  Rounder are to be thanked for getting it to us at all, and particularly for the quality of the sound restoration work by Jack Towers - it's hard to believe that many of these recordings are almost eighty years old.  Rounder are issuing a vast amount of wonderful music at the moment - it is to be hoped that they will take rather more care over the documentation than has been the case with this record.