The Ox and the Ax 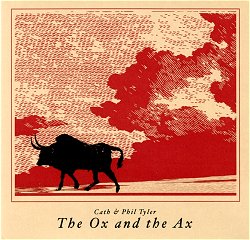 As you'll know from my reviews of Cath and Phil Tyler' previous CDs, Dumb Supper, The Hind Wheels of Bad Luck and The Song-Crowned King, I'm a considerable fan of their music, and I'm very pleased to tell you that No.4 is another winner!

This record is a little different from the others in that Phil caims almost equal billing as the main singer of the songs.  And while I lament missing some of Cath's mesmeric vocals, I'm very pleased to hear more of Phil's.

The songs are (almost) all American, but most also have English equivalents, even when the names are different.  So you'll find that Finest Flower is The Unquiet Grave (Roud 51), and is from Michael Walker.  The tune appears in the Sacred Harp (Cooper edition), credited to David Walker.  Rainbow, more widely known as Locks and Bolts (Roud 406), is from the singing of Almeda Riddle, while Rained a Mist, a.k.a The Jew's Garden or Little Sir Hugh, is from Maggie Hammons.

The CD starts in the best way possible, with three absolutely gorgeous songs.  The words for The Two Sisters were taken from The New Green Mountain Songster (1939), edited by Helen Hartness Flanders - it's a good, full version of the story, and it's tune is spledid ... not half so dirgelike as many British versions.  A Fisherman's Song for Attracting Seals is an instrumental that fits on the end like a glove.  Much the same may be said of Finest Flower - good text, fine tune, and some great singing from Phil.  And Almeda Riddle's Rainbow, is simply wonderful ... best American version I've heard, with some super harmony singing from Phil.

But I'm saddened to find The Jew's Garden in the mouths of 21st century singers - and nor do I find this a particularly good version.  The interesting broken rhythm 8-bar tune begins to pall well before the end of the six and a half minutes duration, and Cath doesn't sound all that comfortable sining it.  Of King Henry, Cath says "Phil wrote the tune for this one - he's got that magical talent for making music sound familiar.  The words are from the singing of LaRena LeBarr - a family riddle passed down, but also a conflation between the riddle and a song about King Henry, but that's how it's been passed along".  LaRena LeBarr Clark was from LeBarr Landing, near Lake Simcoe, Ontario, Canada, and was recorded by Edith Fowke in the early 1960s.  Some of these songs were published in Fowke's collections and issued on the LP LaRena Clark: A Canadian Garland (Topic 12T140).

There follow three non-American songs; Lady Dysie (a.k.a. Lady Diamond, Roud 112, Child 269) is a rare Scottish ballad with only 16 Roud entries - 5 of which apply to the Child entries.  The Tylers got this from one of Martin Carthy's John Peel radio sessions.  The Song of the Low (Lower Classes, here) was a poem composed by Ernest Jones, a Chartist who published it in 1852, set to another of those great Phil Tyler original tunes we're getting used to on these CDs.  Some wonderful words here: 'We're low, we're low, our place we know; only the rank and file.  We're not too low to kill the foe - too low to touch the spoil.'

The Fair Maid of Wallington is a traditional Border Ballad, (Roud 59 ; Child 91) with yet another splendid Phil Tyler tune.  The story is a harrowing one of multiple deaths in childbirth, and this localised Northumberland version appears in text from 1775.  Back in America again, Talk About Suffering is the great Doc Watson song you'll have heard before, from his 1964 Vanguard record - and which, surprisingly, has only that one entry in Roud's Index.  Amazing to think that it's not been collected anywhere else.

This is a truly great record; possibly the best Cath and Phil have yet produced ... or simply that I like it the most!  The two of them singing in harmony (as they do on almost every track) is just wonderful.  It starts and ends so well that the slightly less interesting middle section matters less than it might in another setting.  One little oddity: the track listing on the cover has tracks 1 to 4 as Side A, and tracks 5 to 9 as Side B ... on a CD?

The reason I didn't mention how to buy this CD was that I wasn't able to find out!  I've now spoken to Phil, and can tell you that it isn't actually released 'til March 31st!  You can pre-order now from their Bandcamp page, which means you can buy it now, price just £7.00, and it will be posted out the week of release (end of March).  The Vinyl LP is also available then.  This must be the first time I've received a review copy ahead of publication date!